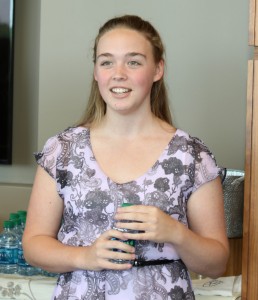 Mallory Carnes at the Rose Library Fellowship and Award Celebration 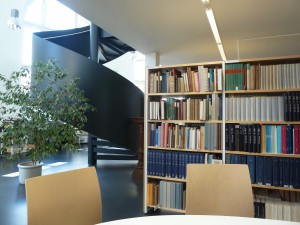 The Reading Room of the Leipziger Stadtbibliothek (Leipzig Municipal Library)

Today was my sixth day in Leipzig, Germany and my second-to-last day working in the Leipziger Stadtbibliothek (Leipzig Municipal Library). I’ve had an amazing trip so far and am so glad that I had this opportunity. I’m really proud of what I have accomplished so far considering that this is my first time in Europe, plus I am completely by myself and don’t really know any German!  Today was definitely a test of my confidence, patience, and spirit, but I persevered and have more information and more souvenirs to show for it!

This morning, I followed my normal Germany morning routine: wake up, get dressed in business attire, hand my key to the front desk associate on the way out of my hotel, and grab breakfast before heading straight to the library. Thankfully, the library doesn’t open until 10:00, so I didn’t have to get up too early. I arrived at the library and walked up several floors to the Lesesaal (Reading Room), where I had the privilege of handling some of the oldest and rarest hymnals in the world. Every day it baffles me that they allow me, a foreign undergraduate student with almost no knowledge of the German language, to hold these beautiful (and in some cases, disintegrating) books. 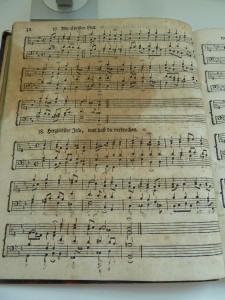 However, this morning there was a complication. Every day, I looked through approximately ten hymnals, scanning for instances of the hymn “Herzliebster Jesu, was hast du verbrochen” and analyzing them.  At the end of the day, I put in a request for books for the following day.  Yesterday afternoon, I submitted my request list to Frau Bӓrwald, the young woman I worked with in the library.  When I arrived this morning to get my cart of new hymnals, though, I was presented the exact set of hymnals I used yesterday.  Because I traveled such a distance and only had a short time frame in the library, it was imperative that I was able to see these hymnals, so I approached the new librarian at the desk.  He was an older gentleman who I had not previously met, so I was timid considering my mere month of online self-taught German skills.  I attempted to explain the problem to him, but he stormed off down several flights of stairs to get a younger man who could translate for us.  After explaining myself several times in various attempts at English and German, the older librarian finally understood and stormed off again to get the new set of books.  Feeling very shaken and upset, I was not in a great mindset to start the morning, but I was determined to make the best of the day. 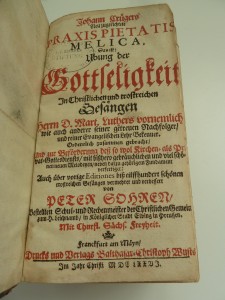 I am so glad that I didn’t given up today, because I got some great data!  Today, I used ten hymnals from over one hundred years of Protestant German history. I found instances of “Herzliebster Jesu” in over half of the hymnals, including everything from a 1782 J.S. Bach Choralbuch to the original composer’s own hymnal publication (Praxis Pietatis Melica) in a later 1676 edition. I found different versions of the original text and tune, which allowed me to make important comparisons across time, space, and denomination! This will definitely make for a great addition to my research paper about the English-language translation and adaptations of “Herzliebster Jesu” (“Ah, Holy Jesus” in English). I’ve worked hard on this research project all year and it will be quite fulfilling to round out the paper with the addition of my research on the German-language origins of this hymn, which has since become so important to the Lutheran Church and many others.

After numerous hours at the library, I decided it was time to venture out for gelato and some sightseeing.  The musical culture of Leipzig is so alive and the history is incredibly rich – exploring the city has definitely brought a renewed sense of passion and a deeper understanding not just to my research project, but also to my pursuits in instrumental music performance.  Being in a city that famously housed J.S. Bach, Felix Mendelssohn, Richard Wagner, and Robert Schumann, to name a few, was renewing and reinvigorating!  This afternoon, I planned to explore the Mendelssohn-Haus, Mendelssohn’s final apartment where he passed away after two heart attacks, which has since been converted to a two-story museum and music venue.  Leipzig’s Zentrum (City Center) is well-organized and features many signs pointing to tourist attractions, so I followed these signs toward the Mendelssohn-Haus. 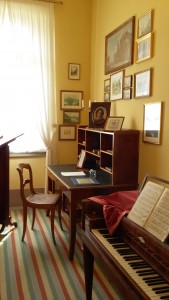 Mallory visited several cultural institutions during her stay, including the Mendelssohn Haus.

The museum was amazing, to say the least!  I toured the garden, Mendelssohn’s personal study where he composed, and even stood in the room where he reportedly passed away.  After being brought to tears standing in the performance space where Yo-Yo Ma, Janine Jansen, and many other internationally renowned soloists have performed, I left the museum, utterly amazed with the musical history of Leipzig.  After the chaotic start to my morning in the library and the difficulties I had finding the Mendelssohn-Haus, I hoped that my next stop would be easier: I hoped to visit the Museum of Musical Instruments, one of the three museums under the Grassi Museums umbrella.  After only a short walk on clearly labeled streets, I found the museum, purchased my ticket, and went inside.  I again found myself dumbfounded by the musical history of Leipzig.  I saw more harpsichords that I could ever imagine in one place, as well as instruments from more than five hundred years of European history.  I could hardly believe my eyes to watch the history of the modern violin and viola develop before my eyes.  Even though I couldn’t read the labels on the exhibits, it was profoundly moving to see these beautiful instruments in their glass cases glistening under the museum lights.

All in all, today was beyond words.  I have seen and experienced things that I could never dream were possible.  It seems too good to be true that I am exploring Leipzig by myself with only the most basic understanding of German, Germany, or the history of this area.  However, I am learning so much and so grateful that my “Yes!” to Dr. Crist’s offer to help me with a research project led me on a trek across the globe this summer!