Emory University’s Stuart A. Rose Manuscript, Archives, and Rare Book Library is pleased to report acquisition of the current archives of the Sigma Pi Phi Fraternity, the oldest African American Greek-letter fraternity in the United States. Known as the Boulé, the organization was initially organized in Philadelphia in 1904 as a post-graduate society for black professionals. From its origin, the Boulé membership has been limited to a small number of leading men in the African American community. It serves as a social organization, a learned society, and as an instrument for advancement as well as for mutual support. 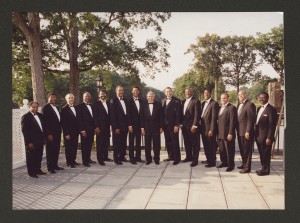 Members of the Kappa Boulé, established in Atlanta in 1920.

Virtually all members are college graduates, but most also have advanced degrees, whether in law, medicine, education or the ministry. Chapters have been established in several countries outside the United States, in locations such as the Bahamas, and membership now exceeds 5,000, organized into more than 100 local Boulés. The Boulé Foundation, created in 1980, supports social action programs around the country as well as offering scholarships for deserving youths.

For much of its history, the organization worked behind the scenes to affect social change, but it has always worked to support justice for all citizens. In recent years, the Boulé has been increasingly engaged in social action, while not neglecting its primary goal of mutual support of its members, congeniality, and care for its community. 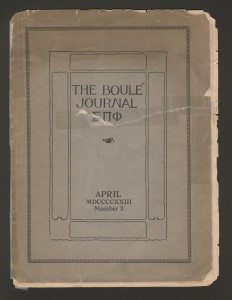 The earliest Boulé journal in Rose Library’s collections is from 1923.

The collection at Emory, which complements and supplements holdings of Boulé materials at Fisk University, includes a nearlycomplete set of the Boulé Journal, published beginning in 1912. The earliest issue at Emory, dating from 1923, came with the papers of Kelly Miller (1863-1939), a prominent late 19th and early 20th-century educator and intellectual. Emory also holds papers of other Boulé members, including Lerone Bennett, Horace Mann Bond, Joseph A. Pierce, and James A. Porter, as well as housing the library and some of the papers of Carter G. Woodson. The collection is rich in its photographic archive of the organization, its members, and their spouses. The collection also includes a significant amount of electronic records created by the organization in the course of its activities.

“The acquisition of the Sigma Pi Phi records by Emory is the culmination of a successful collaboration with the Fraternity to ensure the long-term preservation and availability of their current archives, as well as a stepping stone to future collaborations with the Fraternity and Fisk University to promote access to and use of the archives by researchers, near and far,” says Jennifer Meehan, associate director of the Rose Library. “The Rose Library is honored to be one of the stewards of the Grand Boulé’s documentary history.”

As with all the archival collections at Emory University, the papers of the Sigma Pi Phi are open to the public, and researchers and interested individuals are welcome to use this collection. The electronic records are currently closed for processing, but will eventually also be open for use in the reading room.

The finding aid for the Sigma Pi Phi Records at Emory is available online at: http://pid.emory.edu/ark:/25593/rmznh

Links to the finding aids for the Sigma Pi Phi Archives at Fisk are available online at: https://www.fisk.edu/academics/library/special-collections-and-archives#S