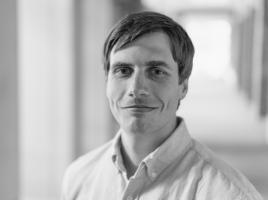 Joseph Thompson, PhD candidate at the University of Virginia

Thanks to the generous funding of the Rose Library short-term fellowship, I completed five days of research at Emory last week and acquired essential primary materials for two of my current projects. As a doctoral candidate in the University of Virginia’s Corcoran Department of History, I am currently gathering primary sources for my dissertation, “Sounding Southern: Music, Militarization, and the Making of the Sunbelt.” This work uses popular music to analyze southerners’ relationship to the federal government since World War II. Specifically, I argue that popular music functions as a lens into the way southerners negotiated their racial, regional, and political identities in response to the South’s economic reliance on the military-industrial complex in the postwar era. Following World War II, southern legislators like Georgia’s Richard Russell and Carl Vinson used their positions within the Armed Services Committee to channel government money to their districts in the form of base expansion and military contracts. My project analyzes how this economic dependence on federal defense spending fostered partisan realignment while generating both patriotic protests and nationalistic devotion to the armed forces among southern citizens. With chapters ranging in topics from Elvis in the army to Gil Scott-Heron’s poetic blues protests against the Vietnam War, this project suggests new ways of hearing the twentieth century and the political transformation that occurred as the South evolved into part of the Sunbelt.

I used my time at Emory to locate archival sources, including the James C. Davis papers, which will ground my musical analysis in the political and business histories of the mid-twentieth century South. Congressman Davis’s district benefited from the courtship of military spending that boosted Georgia’s economy. Ironically, many white Georgians faced a dilemma when the armed forces introduced racial integration, a process that began in earnest during the Korean War. By accessing the Davis collection, I found correspondence from white parents complaining about their sons having to serve alongside African American troops. This collection also holds dozens of letters from citizens regarding the proposed Universal Military Training bill and U.S. involvement in Korea that expressed overwhelmingly negative reactions to these uses of the armed forces. Davis’s white constituents often grounded their opposition in conservative protests towards what they perceived as governmental over-reach and dangerous steps toward socialism. Based on his responses to these letters, Davis found himself in the unwelcomed position of having to deal with the unintended consequences of military expansion and the racial integration it brought to the South. Caught between a rejection of New Deal/Fair Deal liberalism and suspicion towards the Eisenhower administration, the correspondence between Davis and his supporters provides a window into the Solid South beginning its metamorphosis from the Democratic to the Republican Party. These sources will give my dissertation the voices of everyday citizens as they dealt with the nation’s postwar expansion of the military-industrial complex and how that expansion threatened to alter the South’s political economy.

Although my dissertation tells a national story of political change and state expansion, I root my narrative in local voices and spaces, finding instances where southern cultures met, and often clashed, with federal policies. The Lockheed plant in Marietta, Georgia has emerged as the focus for one of my dissertation chapters, which led me to the James V. Carmichael papers. An attorney, businessman, and Emory graduate, Carmichael ran the Bell Bomber factory in his hometown of Marietta during World War II, giving Cobb County its foothold in the aircraft industry and establishing ties with federal defense spending that continues into the present. Bell left Marietta after the war, but Carmichael helped bring Lockheed to the vacant factory, where the production of military aircraft delivered an economic boon to Cobb County beginning in 1951. Carmichael took pride in delivering defense industry jobs for his hometown, and he remained on Lockheed’s board of directors after stepping away from the day-to-day operations. Using the family scrapbooks and minutes from the board of directors meetings, I am in the process of reconstructing the narrative of Carmichael’s role in bringing the corporation to his hometown, as well as his part in sustaining the relationship between the Georgia plant and the rest of the Lockheed corporation. 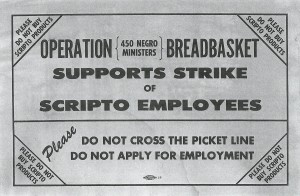 Somewhat amazingly, Carmichael divided his attention between the Marietta plant and his position as president of Scripto, Inc., the manufacturer of pens, pencils, and cigarette lighters in downtown Atlanta. While Lockheed relied on a majority white workforce, the Scripto plant hired African Americans almost exclusively, providing a unique chance to analyze race and corporate citizenship in the postwar South. Carmichael certainly subscribed to the idea of Atlanta exceptionalism when it came to denouncing the vicious racial violence that marked so much of the Deep South. Through a collection of WSB radio recordings from 1946 (kindly digitized for me by the Rose Library staff during my visit), I listened to Carmichael lambast the race-baiting tactics of Eugene Talmadge in a failed attempt to unseat the overt white supremacist from the governor’s office. Due to his modicum of racial progressivism, Carmichael felt surprised when the Scripto workers voted to unionize in 1963 and go on strike in 1964. Using the speeches he delivered to his black workforce, I read the sense of betrayal he felt when these workers pushed back against his racial paternalism, fought shop-floor discrimination, advocated for wage increases, and found power through collective bargaining. Additionally, I accessed the Southern Christian Leadership Conference materials associated with the strike to gain an inside view of the organizing efforts led by C.T. Vivian and Martin Luther King, Jr.

The few existing historical accounts of the Scripto strike describe Carmichael as the racial moderate that he appeared to be in his public speeches. In an address to Emory’s graduating class of 1950, the business leader told his audience, “I sicken of these people who are always waving the Confederate Flag, and telling us what a glorious heritage the South has. No one denies this heritage, but too many of our people want to keep on living on Who they are and Where they came from. The only criteria of individual worth is What a person is doing and Where he is going.” Despite his rightful rebuke of neo-Confederate provincialism, Carmichael’s belief in the power of the market alone to move the South past its ties to the past produced some political and racial blind spots. That same speech included critiques of Democratic liberalism that denounced government subsidization and social welfare as forces that worked against southern entrepreneurialism. My work will analyze Carmichael’s discourse of free market individualism for the way it signaled and aided in the realignment of white southern voters to the Republican Party, especially on his home turf of Cobb County. 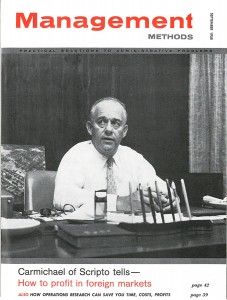 Carmichael’s belief in the loyalty of Scripto employees led to consternation when they unionized in 1963.

Carmichael made a habit of heralding the value of free enterprise as the cornerstone of southern progress, an idea he repeated in a profile featured for Management Methods magazine in September 1958. In this interview, he again denounced government intervention and ascribed Scripto’s successes to the South’s “very satisfactory type of labor. Most of the people here in the South have a heritage that goes back several generations. These roots make for a stable type of employee. In our Scripto plant, absenteeism is practically nil; turnover is practically nil. And our people give us a full day’s work.” Without discussing race or unionism, Carmichael described a black work force that never started trouble and remained loyal to the company thanks to his management skills even as tensions over wages and discrimination were building among Scripto’s black workers. Likewise, he missed the paradox in deriding government subsidization while having established a seemingly never-ending channel of federal spending at Marietta’s Lockheed plant. I will explore these political ironies and their relationship to white supremacy in a chapter titled “Planes, Pencils, and Politics: How the Racialization of Labor Practices Shaped Postwar Atlanta” for the collection Reviving Southern Labor History: Race, Class, Power (UP Florida, forthcoming), edited by Matthew Hild and Keri Leigh Merritt. My time at the Rose Library proved incredibly fruitful for both my projects, and I thank the staff, especially Kathy Shoemaker, for assisting in all my research needs.