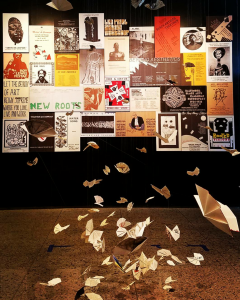 In the 1970s, Camille Billops and James V. Hatch started inviting friends and students into their New York City loft to record public conversations with visual artists, writers, poets, actors, and musicians. During this time, they also acquired books, manuscripts, photographs, and art. Roughly 40 years later, this multimedia collection has become one of the largest and most comprehensive private gatherings of African American art and culture in the world. With much of the collection now housed at Emory University, the Billops-Hatch collections contain over 13,000 slides of work by African American artists; 4,000 black and white photos documenting writers, performers and visual artists; a library of more than 10,000 books and periodicals; written materials including doctoral dissertations, theater programs, and letters; and an array of ephemera.

The Billops-Hatch Butterfly Project is a visual origami art installation built in honor of Camille Billops and James V. Hatch as part of Emory University’s Still Raising Hell: The Art, Activism, and Archives of Camille Billops and James V. Hatch exhibition opening on September 15, 2016. Curated by Dr. Pellom McDaniels III, this exhibition will facilitate an interdisciplinary exploration related to how art is used to capture historical truths, as well as advocate for social and political activism on behalf of the marginalized.

As part of the exhibit, the origami butterflies represent deceased black artists, many of whom were friends of both 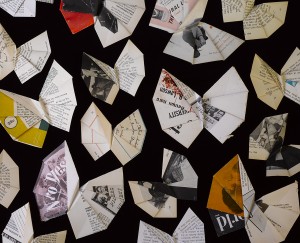 Camille and Jim, who have ascended from the physical world onto another plane. This ascension is represented as 250 unique butterflies float away from the exhibition itself into the sky. There are several different materials used to construct the butterflies themselves. The bulk of them are made from old copies of 1960’s era Negro Digest journals. As art lovers enter the exhibit and look up toward the installation they will be able to see the print from various articles folded into butterflies as well as the unique covers of each journal. In addition, this project includes individual “showpiece” butterflies folded from material out of three local Atlanta artist’s studios. These artists have donated material from art shows, figure studies, and even some doodles to be folded into butterflies in an effort to create awe inspiring remixes of their original work.

Participating artists include Dr. Arturo Lindsay, a renowned international artist whose work focuses on African spiritual and aesthetic retentions, including but not limited to Santeria. He is also a 30-year professor emeritus of Spelman College and the author of several academic texts about visual art. In addition, he is not only aware of Camille and Jim’s work, but he knows them personally. The Butterfly Project also contains works from Afua Richardson, a musician and comic book artist whose most popular work is attributed to Genius, an award winning comic about a young black woman in L.A. who uses her tactical war acumen to take over the gangs in the city and challenge issues of police brutality. More recently, Richardson was selected as the pencil artist for the Marvel Comic’s spin off of the record breaking sales release of Black Panther, created by Ta-Nehisi Coates and Roxanne Gaye. Finally, the visual artist and rapper, Fahamu Pecou, is known primarily for his work that engages the themes of African spiritual practice, Hip Hop, and African American history. Of late his international practice has been channeled into local Atlanta projects such as creating community-themed murals for Atlanta’s public transportation system, MARTA. Moreover, as a rapper, he has debuted notable singles that feature the likes of Stic Man from DeadPrez and Killer Mike from Run The Jewels. 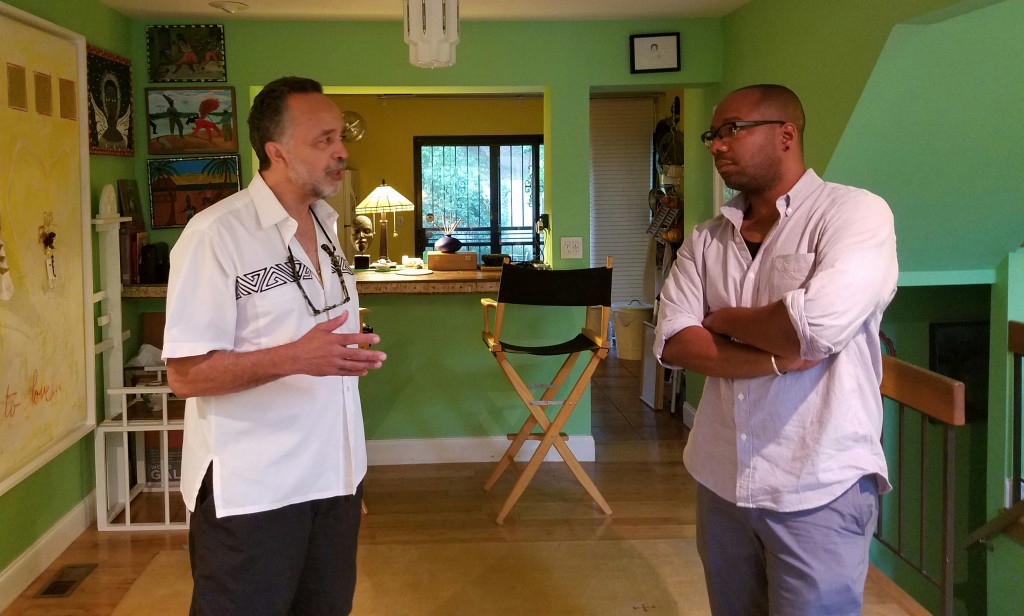 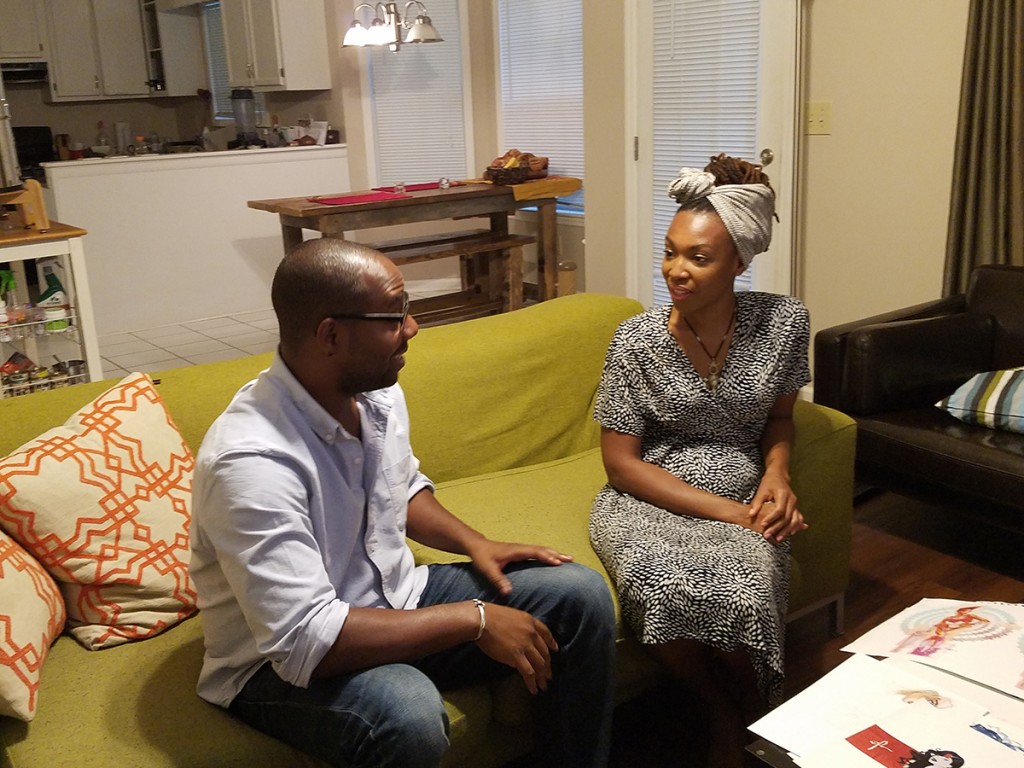 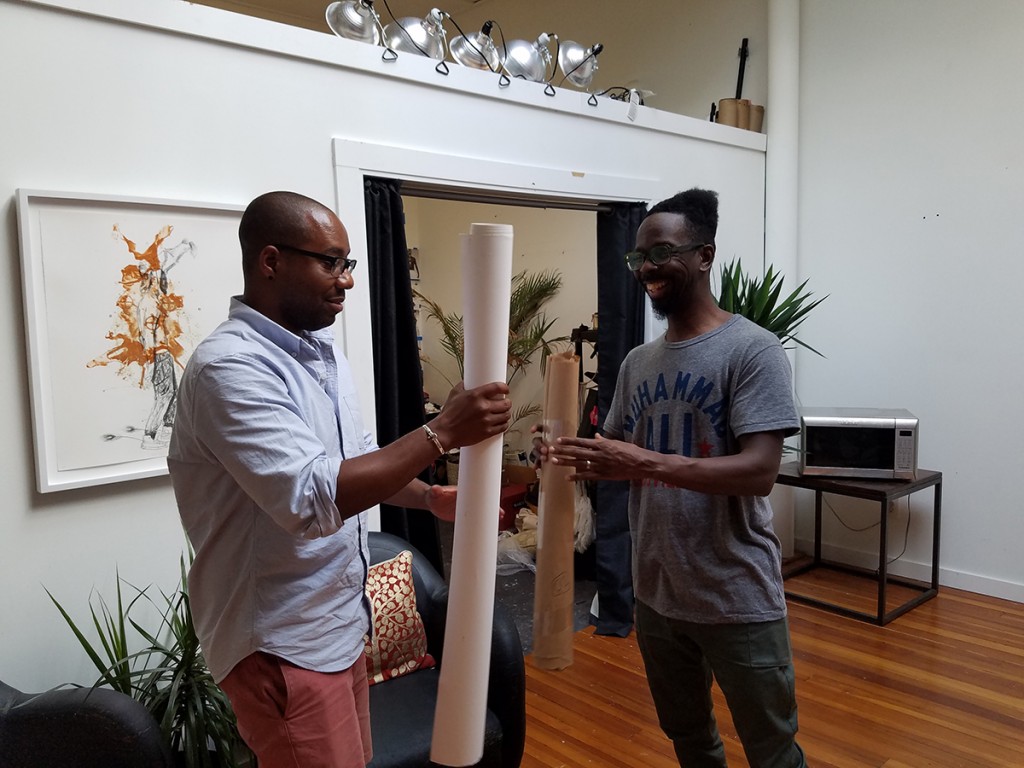 This project is by no means the work of a single individual or set of visual artists. On the contrary, many people have contributed to this incredible undertaking. The idea was conceived by the curator Pellom McDaniels with conceptual and organizational input from Roes Library’s Public Services and Outreach Archivist, Heather Oswald. The installation of the butterflies was conceived of and coordinated by Woodruff Library Exhibitions Designer, John Kingler and executed with the help from several Rose and Woodruff library volunteers. And ultimately, the butterflies themselves were folded by yours truly, Clint Fluker. As such, this installation truly represents a community effort in similar fashion to the community of art enthusiasts that Camille and Jim built together. Their work has inspired so many to create and appreciate the contributions of Black artists and this Butterfly installation will continue to promote that legacy initiated by them in a New York Loft over 40 years ago.