Opening soon at the Rose Library,  “A Question of Manhood: African Americans and WWI” commemorates the centennial of the First World War, while celebrating the African American men who served as citizen-soldiers at a time when they were systematically denied full access to the promises democracy. The exhibit explores the challenges and conflicts, as well as the triumphs and successes experienced by the African American regiments as a whole. The corresponding outreach programming is intended to engage the larger Atlanta community, as well as African American Veterans to increases awareness related to the historical meanings associated with military service for African Americans. 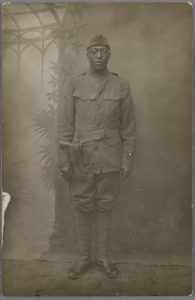 The exhibit will feature rare photographs of soldiers from the Langmuir collection.