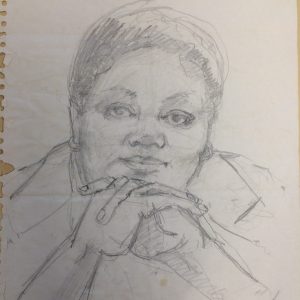 In perhaps her best recognized poem, “won’t you celebrate with me” Lucille Clifton invites readers to celebrate her life. Though “born in babylon / both nonwhite and woman,” the poem’s speaker explains that she has managed to forge a kind of life, and at the poem’s conclusion, she again asks us to celebrate: “that everyday / something has tried to kill me / and has failed.” After reading the poem in my introduction to poetry class this semester, students debated whether the central tone is one of anger or exuberance, protest or joy. One student concluded that these emotions can’t be separated in Clifton’s poem; she speaks to both sentiments simultaneously. 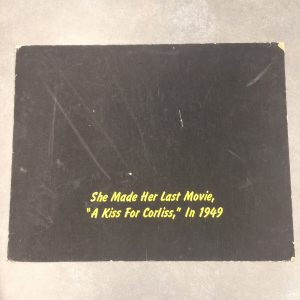 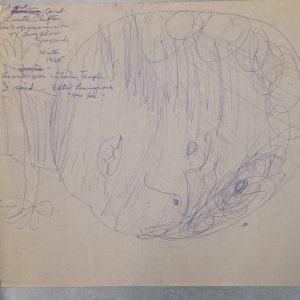 As the 2017-18 Alice Walker Research Scholar, I’ll investigate Walker’s contemporary Clifton to bring greater attention to this complex but under-researched figure. Despite the fact that Clifton’s papers are among the top ten most popular collections among Emory undergrads, scant critical consideration has been given to the her work: only a handful of scholarly articles are dedicated exclusively to Clifton, and these articles pay little attention to her wide and varied manuscript archive. In designing my introduction to poetry course, “Poetry and the World,” this semester, I chose to center Clifton but was surprised to find that she had not been included in The Norton Anthology of Poetry. For me, this speaks to the ways in which Clifton’s distinguished career is sometimes curiously left out of the American canon. Though Clifton, who died in 2010, published over a dozen volumes of poetry, authored numerous children’s books, achieved the National Book Award, and was even a winner on the gameshow Jeopardy!, her importance and influence have yet to be seriously considered (Derricotte 375). 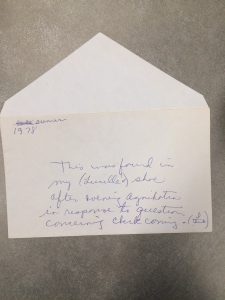 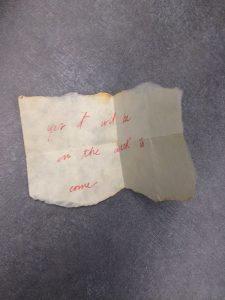 My first introduction to Clifton came late and in something of a reverse order. Though I was familiar with the name, I didn’t begin to engage with the poet’s large body of work until after I’d been exposed to her manuscripts as an archival instruction assistant at the Rose. Instruction Archivist Gabrielle Dudley first showed me Clifton’s spirit writings—or writing under the influence of spirits—to which I found myself continually returning. I became absorbed in deciphering the long scrawls of automatic writing filling yellow legal pads and piecing together her even-more-visually-arresting spirit writing fragments. In a trance, the poet would jot notes on scraps of paper, often burning the edges before hiding them in a shoe or behind a photo frame for her “conscious self” to find later. The fragments show wildly different handwriting patterns and ink colors; they offer premonitions into the future or sometimes words of solace or encouragement for the present.

Over the course of this academic year, I’ll continue to report my findings in monthly posts to the Rose Library blog, tracking my investigations into Clifton’s archives, including her spirit writings, as well as her wider life and publishing record. In our current turbulent political moment, Clifton’s work takes on particular relevance in that her aesthetics offer imaginative possibilities beyond despair. In his New York Times review of Ta-Nahesi Coates’ new book We Were Eight Years in Power (2017), Kevin Young casts Clifton as an alternative to the notion (and Coates’ subtitle) of American tragedy. He describes Clifton’s ethos as one “which, while forgoing easy optimism, sees black life as a secret pleasure, or at least sees joy, however hard-earned, as ‘an act of resistance.’” Through joy, Clifton presents a variety of feminism that is not merely about survival but, instead, offers a mode of black and female empowerment that is as antiestablishment as it is playful. 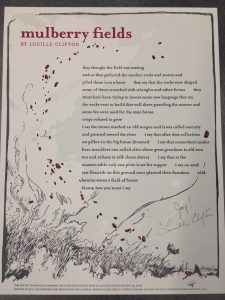 Clifton’s particular brand of resistance can be seen not only in her poetry but also in her other writings, including her correspondence and other ephemera from her archive. In a 1989 piece for Essence magazine, for example, the poet Clifton addresses her deceased husband, Fred, updating him on their children’s lives and reassuring him that everything is and will be “o.k.” “Everybody is trying to make it,” she writes, “Sid has two sons now, you would love. Rica’s tumor turned out alright. The boys fall down and get up again. The little girls are women who love to dance. It is all o.k. It is being o.k. [ . . . ] You are dead 5 years and we are married 31 and a half. So be it, dear. I guess.” The closing lines of the letter show and ambivalence that balances grief and acceptance. She reports that the boys fall down only to get up again and concludes, in the face of life’s myriad difficulties: “So be it.” The authority of Clifton’s voice allows the poet to contain both darkness and light simultaneously, creating a vision of resilience that I intend to explore more fully as I continue my research into her archive.

Clifton, Lucille. “won’t you celebrate with me.” https://www.poets.org/poetsorg/poem/wont-you-celebrate-me. Accessed November 29, 2017.