Marlo Starr (PhD Candidate, English Department) is the 2017-2018 Alice Walker Research Scholar in the Stuart A. Rose Manuscript, Archives, and Rare Book Library. Her project centers on the archives and scholarship of poet and children’s book writer Lucille Clifton who was contemporary of Alice Walker. Marlo will be contributing towards a blog series based on her research and teaching experiences using the Lucille Clifton papers.

What does teaching with archival materials offer to students new to primary source research?

In my English 205: Introduction to Poetry course, students began the semester by reading from  the Norton Anthology of Poetry, a tome of Bible-thin pages and tiny print. In a course designed to give students a broad overview of the genre, an anthology can be an anchor. It allows exposure to a kaleidoscope of poets and a range of formal elements and historical periods, but the convenience comes with a price. Its heft alone conveys a sense of monument, its covers closing and containing history into an undifferentiated block of text. Staring at the stacked reams, we might forget to ask ourselves who is missing and, perhaps more importantly, why. For my class last semester, Lucille Clifton’s absence from the anthology led us to find her in the archives. 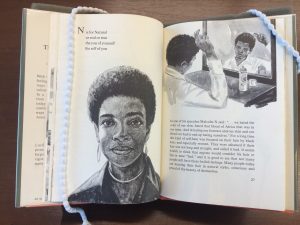 The class first engaged with Clifton’s writings through a draft of her children’s book, The Black B C’s. The draft was grouped with other archival materials under the theme of “The Poet’s Process,” alongside New York School poet Ted Berrigan’s erasures and facsimiles of Emily Dickinson’s envelope poems. Out of all the materials represented, my class was particularly drawn to The Black B C’s, which is unique in that it explicitly shows the phases of the poet’s composition process, with whole paragraphs crossed out and new ones written in by hand. 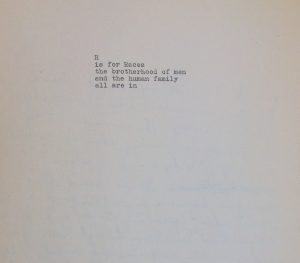 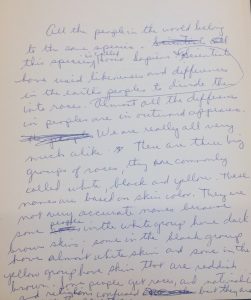 Handwritten draft page of The Black B C’s, Box 24, folder 3

After reading Clifton’s work in class, we returned to the Rose Library to track changes in multiple drafts of “the death of joanne c.” and “in the same week.” Students used the activity to write poetry analysis papers comparing incremental changes across the drafts to the published versions (similar to Dr. Nathan Suhr-Sytsma’s assignment, which can be found on our Assignments Portal). In our final, third visit, we delved deeper into Clifton’s personal papers. In preparation for their own final projects, in which students developed a virtual exhibit usin a poet’s archive of their choice, the class examined documents and ephemera, including correspondence showing Clifton’s clashes with editors and publishers, diaries and notebooks, rent statements, an astrology wheel, a Jeopardy! card from the poet’s appearance on the game show, and of course, her spirit writings, or automatic writings channeling spirit voices. As students sifted through the materials, they noticed recurring themes of racial and gender oppression, as we had discussed in class, and death and illness in the family. But they also commented on the poet’s humor and irreverence, how she held her ground in disputes with editors or made quips in margin notes. Seeing the poet in context—in the stuff that had made up her life and from which her poems emerged—gave students a better sense of Clifton’s personality and complexity, but at the same time, I think it also showed them how little we know and how much more there is to know. A few archival objects or poems or even books can only give us a partial glimpse of a life, and Clifton’s eclecticism makes her particularly difficult to pigeonhole. 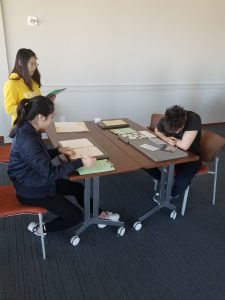 For her final project, one student who chose to focus on Clifton and created an exhibit around the poet’s writing for children. Through her own initiative, the student considered the lack of black characters in children’s literature and developed an argument about how Clifton worked to address this lacuna in her own writing. For me, this student’s insight helped to create a connective bridge between the Clifton’s children’s books and larger poetry career. Because the insight came from the student’s archival research rather than class discussion or secondary readings, it stood out as her own original analysis.

As a teenager, I worked in a Barnes and Noble café, where a mural displayed authors from different generations mingling over coffee. Though I hadn’t thought about the corporate mural in years, I found myself revisiting the memory as I planned my class last summer. After the store closed, the assortment of writers’ faces were my only company as I mopped the café’s tile floors. I remember a ghostly Dickinson sidled up next to Thomas Hardy and Mark Twain—as though Dickinson would choose to hang out with those two; as though she would choose to hang out with anyone at all. A lone Langston Hughes represented the only writer of color, and Franz Kafka was the only non-American or -British author. For me, looking back, the mural represents some of the tendencies of anthologizing. It conveys a sense of completeness, where all the important figures are gathered together and flattened to one plane under a glossy finish. It checks off certain boxes in terms of representation (who needs more than one woman writer, anyhow?) and takes them out of their individual contexts, as well as out of their aesthetic or political projects.

Anthologies, in and of themselves, are not ideology, and archives, of course, are also their own institutions with their own methods of gatekeeping and consecration. At the same time, I think that putting these institutions in tension with one another can help shake them up in students’ minds. They can begin to see that the story isn’t over and that there’s more to be said. Engaging with archival collections helps researchers place figures back into their material histories, and perhaps more importantly, it opens up other avenues of potential research. Like my student who followed her own thread to draw her own conclusions about Clifton’s work, researching in the archives can highlight what has been left unsaid and what has yet to be said (which are not always the same thing).