This is my final post on the Rose Library’s blog as the 2018-2019 Robert W. Woodruff Fellow. It’s been a really enlightening and unique experience this year. My time working behind the scenes in the archives gave me a better understanding and appreciation of how archives operate, and of all the work that goes into the organization of collections: as a researcher, I feel that this greater understanding will allow me to utilize archival resources much more effectively in the future. For this reason alone, I would definitely recommend that more humanities scholars spend some time working (not just researching) in archives. My own time in this fellowship position was spent working, with Laura Starratt, on a collection of an Atlanta-based public access television show called The American Music Show. Throughout the year, I was able to approach this material from several angles, from processing the collection itself to creating a Wikipedia page to organizing a public screening of the show. I’ve written about some of the more practical aspects of this work in other posts (here and here, for instance), but in this final post I want to more generally discuss how I’ve come to think about the contents of this collection in relation to my own research. 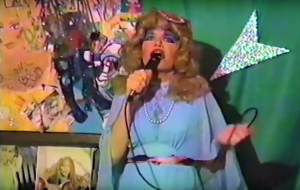 DeAundra Peek of The Singing Peek Sisters performing on The American Music Show.

The American Music Show was a wild, absurd, extremely low-budget TV program that featured acts from Atlanta’s queer and drag scenes, local music, independent short films, and sketch comedy. It also reported on and actively fought against racism and homophobia in the South. Most famously, RuPaul made his television debut on the show in the early 1980s. For a more detailed discussion of The American Music Show and its relation to Atlanta’s history, you might start with this guest blog post that I made for Atlanta Studies, or this NPR interview that I did alongside Randy Gue (the curator of the Modern Political and Historical Collections at the Rose Library), or this good article in Wussy Mag. I was initially drawn to this collection in particular since my own research and teaching deal with questions of sexuality and performance. And, going forward, I definitely plan to incorporate The American Music Show into my teaching at least. For instance, it seems like the show would offer a very rich way to understand different aspects of performance and “performativity”—in relation to the arts as well as gender—and would do so in ways that are probably more concrete than just reading Judith Butler or even watching more traditional drag acts. This is because the seamless manner in which drag saturates even the more mundane aspects of the program, I think, does a really good job of depicting the creative sides of gender expression outside of any simple dichotomy between normativity and exaggerated, ironic pastiche. A unit on The American Music Show would also work quite well in a course on media history, specifically in terms of the history of public access television as an early attempt at the democratization of media production. For more on this aspect of the show, one could look to Charlotte E. Howell’s 2017 article, “Symbolic Capital and the Production Discourse of The American Music Show: A Microhistory of Atlanta Cable Access,” in Cinema Journal (57/1). James Bond, who played a role in bringing public access to Atlanta as both a city-councilman and a co-founder of The American Music Show, had some interesting comments along these lines at an event that we put together at Emory, back in March of this year. If you’re reading this and are interested in using The American Music Show in your own teaching, a good place to start might be this YouTube channel, created and curated by the late Dick Richards, the other co-founder of the show. If you’re in Atlanta, you might also consider stopping by the Rose Library to view full episodes from the collection—which is open to the public.

Working on The American Music Show this year also helped me to think in broader terms about my own research as well. My dissertation is about the idea of decadence in music, opera, and poetry. In it, I analyze a bunch of old authors and composers, from the eighteenth through the early-twentieth centuries. Though I didn’t necessarily know it when I first began, working on The American Music Show has actually complemented this research in some really interesting ways (I think), two of which I’ll mention here. The first is that it got me to think more about how opera and drag are much closer than one might be inclined to think initially. Both, for example, can be rather histrionic. Both involve libidinal excesses and “gender bending” (it was exceedingly common and often required for men to play women’s roles throughout the history of opera). Neither are particularly concerned with the suspension of disbelief. 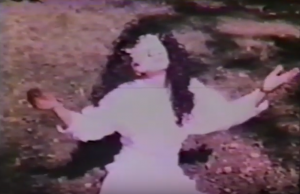 Brenda (played by Molli Worthington) from Wayne Hollowell’s film, Comes the Blood. The film aired on The American Music Show. Video and original promotional material are available at the Rose Library.

Not to mention the similar sartorial choices. And the music. Secondly, The American Music Show also resonates in some interesting ways with the idea of decadence. “Decadence” is a notoriously slippery concept. In its most basic form, the word means “decline,” and had been used more or less in this general sense (especially to describe late Roman literature) until about the nineteenth century, when, in light of popular discourses about cultural degeneration leading up to Europe’s so-called “fin de siècle” period (c. 1880-1900), it took on more meanings. Describing artistic tendencies in figures from Charles Baudelaire to Oscar Wilde, then, the term “decadence” came to denote anything that signaled a decline away from nature and morality, typically involving themes of “perversity, ennui, art for art’s sake, transgressive modes of sexuality, artificiality, and decay” (see Matthew Bradley, Oxford Bibliographies). Except perhaps for decay, The American Music Show seems to check all these boxes in one way or another. Later, in the mid-twentieth century, the inheritor to the idea of decadence was arguably the idea of “camp,” as Susan Sontag famously outlined it in her 1964 “Notes” on the subject: there, although she does not name it as such, Sontag links camp with several of the themes and satellite movements associated with nineteenth-century discourses on decadence. Probably one of the first things that one notices about The American Music Show is its campy aesthetic: its bright flashy colors, maximally decorated sets, excesses of makeup and costume, ironic dispositions, etc., etc. I’d be tempted in this regard to quote Sontag’s 41st note on camp in relation to the show:

I won’t attempt to justify this comparison any further here. I bring it up in the first place because I think there is an interesting connection to be made, in terms of how The American Music Show developed a unique, campy response to discourses of moral decadence in the context of the American South at the twentieth century’s own “fin de siècle.” But of course this is only one—somewhat idiosyncratic—angle from which this show might be considered, and much of what it contributed to the history of performance art still remains to be thought. I’m very grateful that this fellowship allowed me to work so closely with this collection, and that it allowed me to meet so many interesting and generous people in doing so. Now that the fellowship is over, I’m going to be putting the finishing touches on my dissertation and applying for teaching jobs, but I’m sure that The American Music Show will stick with me for years to come.