In Spring 2019, Daniel Ciba, an assistant professor of Theater (History and Dramatic Criticism) at Ramapo College of New Jersey, was awarded a Rose fellowship in support of his project “The Broken World of Esther Merle Jackson.”

Because of the generosity of the Leonard and Louise Riggio Fellowship, I was able to survey the contents of the Esther Merle Jackson Papers at the Stuart A. Rose Manuscript, Archives, and Rare Book Library for two weeks during June 2019. This collection of 46 unprocessed boxes is remarkable because it not only contains traces of Jackson’s contributions as a scholar and educator, but also reveals how interconnected her life, her scholarship, her teaching, and her academic service were.

I became interested in exploring the contents of the Jackson Papers because she published a book entitled The Broken World of Tennessee Williams in 1965 that I cited in my dissertation. Before my visit, the only information I could find about Jackson was from her obituary: she was born in Arkansas in 1922, taught at the University of Wisconsin-Madison from 1965 until her retirement, and died in 2006 from complications with Alzheimer’s disease.[1] After uncovering that she was African-American during my prep for a course I taught last fall, I assumed that these papers would contain the untold story of Jackson’s legacy, a story that would remain scattered throughout these boxes without a scholar interested in sorting through and evaluating these pieces of archival evidence.

In talking with Interim Head of Manuscript Processing Sarah Quigley, the Rose Library acquired the collection in 2011 as a gift from Dr. Jackson’s brother-in-law Joe Petty and his daughters Jill and Miriam. Before their acquisition, the papers were located in a storage unit in Little Rock. As of now, the collection remains unprocessed, which means that every single box was unique and only by searching through the boxes could I determine what they contained. When I accepted the fellowship, I could not request individual boxes. By the time I visited, a finding aid was created, which included very general descriptions of the contents of each box.

I mention these pieces of information because I view the disorganization of Jackson’s papers as a positive rather than a negative aspect of this collection in its current state. In other words, I was able to examine each of the 46 boxes with relatively little curatorial imposition. 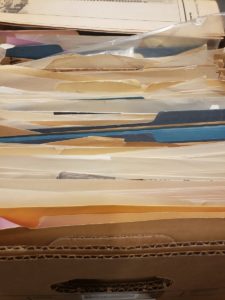 Within the collection, I found the regular archival materials that I expected to find: correspondence, drafts of articles, playbills, production photographs, and newspaper clippings. But I did not expect to find the massive amounts of pedagogical and institutional ephemera, nor the personal items that stood out because it is rare to gain access to an unprocessed collection without the general organization imposed regularly that separates correspondence, drafts, and course materials from what might be considered less useful items. In every single box, I found empty folders, folders that were mislabeled or untitled, and many loose (and sometimes even blank) pieces of paper.

After processing, I would expect the collection would be condensed by half, as I found multiple photocopies (frequently more than twenty) of much of the course materials and more than a third of the items I encountered might seem to hold little value for scholars interested in gaining quick access to the portion of these papers that Jackson wrote. Because it has not been processed, the collection definitely presents a challenge, but I found great value in seeing how seemingly random scraps have the potential to reveal more about Jackson’s personality than a processed version of this same collection would.

One of my most revelatory finds was Jackson’s second book project. Scattered throughout the collection, I found correspondence with publishers about their suggestions for edits and her resistance to accepting those revisions, research files that contain her sources, numerous drafts, and a bound copy that appears to have been self-published in 1981.[2] Entitled The American Drama and the New World Vision, Jackson’s 797-page manuscript includes fifteen chapters and 132 pages of endnotes. In many ways, this unpublished manuscript serves as the culmination of Jackson’s scholarship. The playwrights examined include Eugene O’Neill, Maxwell Anderson, Edward Albee, Lorraine Hansberry, Amiri Baraka, and Arthur Miller, as well as another chapter devoted to Tennessee Williams. Although Jackson published many articles that cover the same material, this manuscript connects her scholarship as a through-line that she developed directly through her many years of teaching.

I was also surprised by the amount of material that serves as evidence of her pedagogy. The collection contains numerous syllabi, course calendars, graded papers from students, lecture notes, handouts (mostly bios and chronologies about playwrights which range from the Ancient Greeks to Sam Shepard), and examination questions. There is also significant documentation of production projects that she cotaught with colleague John Ezell, where graduate students at Madison would direct, design, act in, and produce one production every semester. I found playbills, photographs, dramaturgical research files, and written reports from both faculty and students for productions that included Eugene O’Neill’s More Stately Mansions (1980)and The Calms of Capricorn (1981), Tennessee Williams’s Outcry (1981) and The Milk Train Doesn’t Stop Here Anymore (1980), and Thornton Wilder’s The Alcestiad (1984). At least one of these production projects, entitled Wilder Wilder (1978)—an evening of Thornton Wilder’s one-acts—led to an airing on Wisconsin television station WHA.[3] 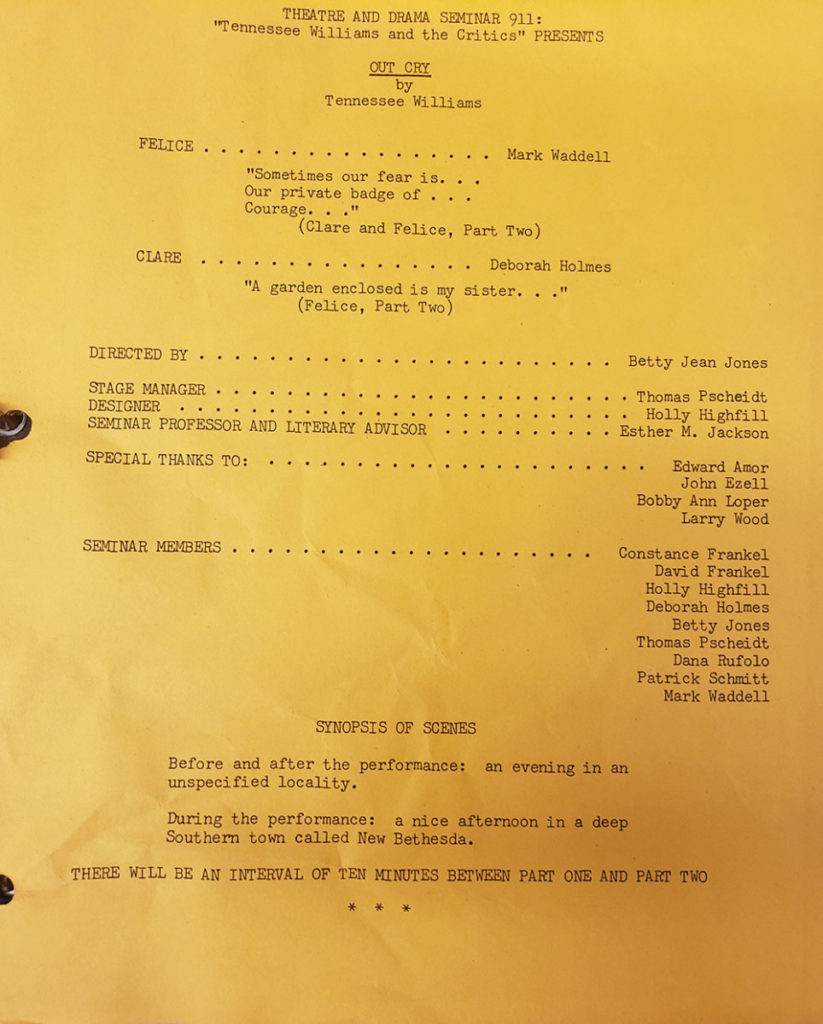 Theater and Drama Seminar 911 page for “Out Cry”

There is also significant institutional documentation. From the University of Wisconsin-Madison, Jackson kept agendas from faculty meetings, diversity reports, and other materials meant for faculty members. The collection also contains correspondence and reports written for several national theatre conferences which include the American Theatre Association, the Modern Language Association, and the American Society for Theatre Research. I also found numerous correspondence and multiple written reports about Jackson’s attempt to establish an Institute for American Theatre Studies, with the help of Ezell, at Madison for over ten years. In 1983, such a program was eventually started by Walter J. Meserve at the University of Indiana, Bloomington.[4]

Because it has not been processed, the collection also contains a significant amount of ephemera. Alongside the contents listed above, I found not only many copies of her published articles scattered throughout the collection, but also manuals, catalogues, bookstore calendars, scholarly and academic reports, full newspapers, and many copies of The Eugene O’Neill Review. In addition, I found bank statements, tax returns, and her own personal yearly finance statements which she sent to her accountant that include her yearly salary and expenses. On top of another draft of her manuscript, Jackson left 471 checks from 1977 in unsealed envelopes, during a time when it was customary for banks to return checks as proof of deposit.[5] As I develop my research for my book project, I will draw on the substantial amount of ephemera in the collection to contextualize Jackson’s life in relation to her scholarship.

With more analysis, the juxtapositions of the ephemeral, the pedagogical and the scholarly would reveal much about Jackson’s life. In this sense, the sprawling and chaotic nature of her papers reveals much about Jackson’s character. Although I found her last will and testament, as well as some correspondence with her family (including several Christmas and Birthday cards), it is somewhat telling how little these 46 boxes document any intimate details of Jackson’s personal life. Nevertheless, the Esther Merle Jackson papers illustrate what she achieved as a scholar, professor, colleague, and mentor.