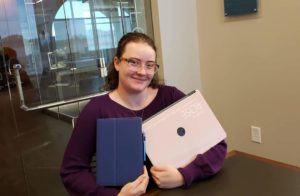 “Born Digital: From Kilobytes to Terabytes,”  curated by Rose Library’s project digital archivist Brenna Edwards, explores and examines the collecting story of born-digital materials at Rose Library alongside the evolution of the technology creating these materials, featuring items from the papers of Lucille Clifton, Jake Adam York, Salman Rushdie, and Elaine Brown.

In winter 2017, Rose Library’s Head of Research Services, Courtney Chartier, sent out a call for people to propose an exhibit idea and claim open exhibit slots. I proposed an idea for an exhibit on born digital materials, which was approved, and we started the year-long production and design process.

Since I knew what the theme was going to be for the exhibit, I came in prepared with a list of possible items for my first meeting with the exhibits team. With these items in mind, we started to talk about the story that would weave the exhibit together. I was then tasked with bringing a story and some finalized items to the next month’s meeting. 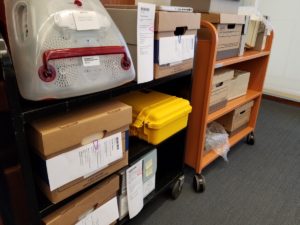 Carts of material considered for exhibit

Over the next few months, we met to discuss the evolving narrative and design of the exhibit, trying to nail down the message and how we wanted to present certain concepts. There were lots of conversations about labels and the story arc, since things had to be distilled to their most basic level for everyone to understand. Around April, we brought in all the items we were thinking about putting in the cases and tested them to see if they would actually fit. This also helped narrow down what we wanted in the cases, since there were size constraints. These mock ups ended up being close to the final design, with the exception of case two, which underwent many different iterations.

The original design for case two was a pyramid to represent how the size of physical carriers became smaller, then an inverted pyramid to show how sizes increased was considered. Once we determined the pyramid design wouldn’t work the way I envisioned it, we started talking about other representations, including laying things out on a timeline and using bar charts. 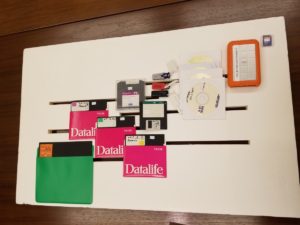 The final result is a mix many of these ideas, showing representations of the amount of data each object holds, while also showing a timeline of these materials and how their physical sizes have evolved.

Using a Raspberry Pi borrowed from the TechLab, my graduate student, Zhexiong Liu, wrote a Python script to take PDFs of poems Lucille Clifton wrote on her MagnaVox, turn them into text files, and then have them print to a thermal printer. This took a lot of testing and re-testing to make sure the printer would work with the Raspberry Pi from the TechLab and making sure it would translate to our own Raspberry Pi. Proven successful and with written documentation on set up and run the Raspberry Pi, the interactive component was ready to go.

After many months of design and label tweaks, it was time to install the exhibit. It was super exciting to see everything come together and to see the magic the exhibits team can work.  We put it all together in about two days, labels and all, and it looks great! Come see it for yourself – learn about born digital materials and take home your own re-born digital Lucille Clifton poem!

Born Digital: From Kilobytes to Terabytes is up through May 16th in the Rose Library.