Rose Library’s Curator of Political, Cultural and Social Movements Collections, Randy Gue, celebrates the 30th anniversary of  Atlanta indie duo Flap on 3.4.2020 with a live music  perfromance by the Emory grads in the archive! 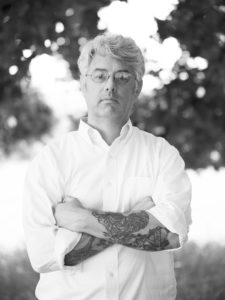 Quick, someone just had a momentary lapse in judgement and approved your proposal to put on a show—live music—where you work. What band would you book? I found myself in this envious situation recently and I chose Flap, Atlanta’s legendary experimental acoustic guitar duo. The esteemed music journalist Doug DeLoach called Flap “one of the most remarkable musical conjugations the universe has ever spawned.”

Why Flap? Their history, their music, and how they fit with the Rose Library’s Atlanta cultural collections made them an easy choice 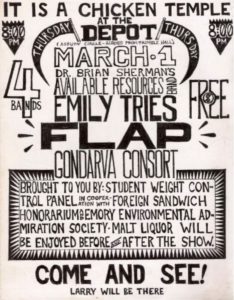 The flyer from Flap’s first show (Courtesy of Flap).

Flap was “spawned”, to use DeLoach’s word, right here in the dorms on campus. The band consists of two Emory University “Double Eagles,” alums who graduated from the college and then also received advanced degrees from the institution. Andy Hopkins and Matt Miller met as freshmen in 1988. Soon after meeting, they were playing together on a four-track “creative project” they dubbed Flap. This project evolved into a band when they roomed together in Gilbert Hall in the fall of 1989. Months later, on March 1, 1990, Flap played their first show at The Depot, now known as Kaldi’s Coffee at The Depot. Here is a recording from the show: https://archive.org/details/FLAP1990-03-01.

Flap has been labeled everything from the city’s “premiere danger-folk duo” to an “acoustic/indie/weird rock duo”. Flap describes their music as “two-thirds instrumental acoustic guitar music and one-third vocal folk and novelty songs”. The instrumental acoustic guitar songs feature traces of bluegrass, punk, metal, hip-hop, and electronic music. “All careening out of control,” they add quickly. If it sounds unique and remarkable, let me assure you it is. 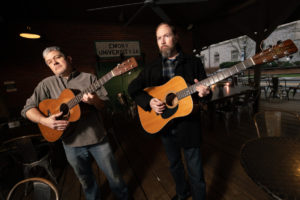 The duo Flap where it all began. Photograph by David Naugle

Connection to the Rose Library’s Collections

Flap’s music and their aesthetic approach intersects with the Rose Library’s collections about art, culture, and music in Atlanta. At the time, Flap recognized the synchronization between what they learned about the avant-garde in the classroom and their experimental approaches to their instruments, song structures, and performance style. They also benefitted from encounters with Atlanta’s art and music community through figures such as Chris Verene and Deacon Lunchbox. The Rose Library’s holdings document the history of these communities with the records of 800 East, the Atlanta punk rock collection, the Blue Rat Gallery, the Nexus Contemporary Art Center (now Atlanta Contemporary), and more. These collections are available to anyone interested in examining the history of our city.

Why a live show in the library?

The Rose Library believes in innovative programming. We want to highlight the ways our collections connect to living cultures and subcultures that our students, guests, researchers, faculty, and staff can participate in. Join us as we explore Atlanta and its communities in unique ways. 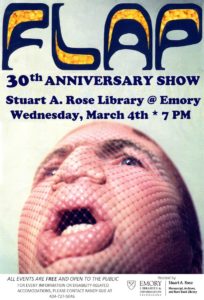