(scroll down for individual listings)

Today is the 200th anniversary of the First Treaty of Indian Springs (January 8th, 1821). In this treaty, signed by the US government and the Muscogee Creek Nation, the Muscogee Creek were forced to relinquish the land which is now present-day DeKalb County and the home of Emory University. By all accounts, this was a coerced treaty. At the treaty’s signing, this tract of ceded land (included within 116 on map) became part of the State of Georgia.* The Muscogee were forced to move west, towards and into Alabama. One year later, in 1822, this area of land was incorporated as DeKalb County, and included the town of Covington (founded 1822), home of Emory’s Oxford College (founded 1836), as well as the land upon which the main campus of Emory University sits. Emory University was founded in 1836, fifteen years after this First Treaty of Indian Springs, as the sons of the new settlers were beginning to reach college age. The 1821 treaty and others during this period led to massive land dispossession from Indigenous nations, and allowed for continued expansion of the Southeastern plantation economy and enslavement of Africans and their descendants. These facts also form part of the background to the horrific forced removal of over 20,000 Muscogee Creek people from Alabama that occurred in 1836-1837 and through which approximately 3,500 Muscogee Creek people died en route. The Muscogee Creek Nation (OK) is currently the fourth largest Tribal Nation with approximately 80,000 citizens. We are looking forward to seeing Emory University and DeKalb County begin to reckon with this history and its enduring consequences, and begin to commit to reparative actions.

Join our panel of scholar activists in a conversation on indigeneity as a global and domestic category. Panelists will share their personal and research-based work with the Emory community, and engage with issues of ethnicity, race, and social justice for indigenous populations.

In the fall of 2021, the Carlos Museum will host the exhibition Each/Other: Marie Watt and Cannupa Hanska Luger

Organized by the Denver Art Museum (DAM), Each/Other is the first exhibition to present together the work of two leading Indigenous contemporary artists whose processes focus on collaborative artmaking.

Be a part of it. Contribute to a monumental artwork by artists Marie Watt and Cannupa Hanska Luger.

Join us on the quad this November 13, 2020 for a socially distanced sewing circle. Embroider a message onto a bandana, which will be mailed to Denver where Watt and Hanska Luger will incorporate them into a large-scale sculpture for the exhibition.

All materials will be provided. Masks and social distancing are required.

The American Indian and Alaska Native (AI/AN) population is at significant risk of misidentification in national surveillance instruments.  The implications of how race and ethnicity are tabulated affect (1) the accuracy and precision of health data and (2) public health planning and policy decisions. This study explored the impact of different tabulating strategies for race and ethnicity on the prevalence estimates, and precision of those estimates, for experiences with persistent feelings of sadness or hopelessness, suicidality, and violence victimization among AI/AN high school students.

Presenter: Temet M. McMichael, EIS Officer, CDC/DDPHSS/CSELS/DSEPD. At a young age Temet developed a love and passion for science; pursuing his interests, he obtained his B.S. in biochemistry, PhD in viral immunology, and found himself in the midst of a pandemic as the EIS officer assigned to the Public Health Department in Seattle & King County. Join us for Temet’s exciting EIS journey which includes EVALI, Polio in West Africa, and lots of COVID-19.

(published October 12, 2020 in the Emory University Office of Equity, Diversity, and Inclusion Newsletter.)

Our/the Indigenous communities and their allies are standing in solidarity with the Black Lives Matter movement. It is important to recognize that this powerful uprising to dismantle systemic racism has supported Indigenous peoples’ struggles and visibility, and has signaled the crucial intertwined history of Indigenous land dispossession and the enslavement of Africans and African-descended peoples in the Americas. Some significant wins include initiatives to “unsettle” and “decolonize” the curriculum, the name change of the NFL DC football team, and the toppling of numerous monuments across the United States of America.

The second Monday of October recognizes the invaluable contributions made by Indigenous nations, peoples, and people. It acknowledges the people who are the first inhabitants of the land that is present-day U.S., and their enduring nations and peoples. Across the United States, numerous higher education institutions, over 100 cities and municipalities (including South Fulton county here in Georgia), and at least thirteen different states have declared the second Monday of October as an official holiday, Indigenous Peoples’ Day. We are deeply appreciative of the recent decision by Emory University President Fenves, Interim Provost Love, and the Emory leadership to officially recognize this day at our institution. In the United States, the movement to recognize Indigenous Peoples’ Day began in the late 1980s as a counter-celebration to Columbus Day. We also wish to highlight that shortly after this, the United Nations designated August 9th as the International Day of the World’s Indigenous Peoples.

Today, we wish to acknowledge that there are 574 Tribal Nations living side by side, or sharing land, with the United States. This represents over 6 million people. Emory University itself resides on land that was forcibly dispossessed by the US government from the Mvskoke/Muscogee Creek Nation in 1821, through the First Treaty of Indian Springs. Emory was founded in 1836, just fifteen years after this treaty, during a period of sustained oppression, land dispossession, and forced relocation of Mvskoke/Muscogee (Creek) and Ani’yunwi’ya (Cherokee) people from Georgia and the Southeast. The ultimate removals of over 60,000 Indigenous people from this region to the area of present-day Oklahoma occurred during the genocidal period known as the Trail of Tears (1830-1838). Approximately 25% of the forcibly displaced Indigenous people died in route.

Today, the present-day Muscogee (Creek) Nation in Oklahoma is the fourth largest tribal nation in the U.S. with over 86,000 citizens. In 2019, Muscogee citizen Joy Harjo was named the 29th poet laureate of the United States. Here at Emory University, Professor Craig Womack, who is also Muscogee, is an internationally acclaimed scholar in Native American literary studies and a talented musician. We owe an immense debt to the Mvskoke, Ani’yunwi’ya and other original peoples who have cared for and inhabited these lands, and to their descendants.

We want the important social justice momentum that is developing across our nation to extend to our campus and ensure that Indigenous voices and contributions are part of our intellectual practices every day, not just on October 12th. On this day we hope that the Emory community will join us in recognizing the resiliency and strength of Indigenous Peoples — and especially our Native students —  in succeeding in an education system that was not designed for them, and one that they are working to decolonize for the enrichment and flourishing of us all.

We welcome the Emory University community to find more resources and statements here at https://scholarblogs.emory.edu/nae

check out this phenomenal toolkit from IllumiNative! 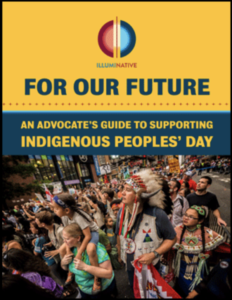 An online discussion and play reading, in collaboration with the Decatur Book Festival, by Mary Kathryn Nagle (Cherokee Nation of Oklahoma), author of the play Sovereignty, about the Cherokee Nation’s legal fight for sovereignty and also violence against women.

Written by Mary Kathryn Nagle, lawyer, playwright, and direct descendant of nineteenth-century Cherokee leaders John Ridge and Major Ridge, Sovereig unfolds over two parallel timelines. In present-day Oklahoma, a young Cherokee lawyer, Sarah Ridge Polson, and her colleague Jim Ross defend the inherent jurisdiction of Cherokee Nation in the U.S. Supreme Court when a non-Indian defendant challenges the Nation’s authority to prosecute non-Indian perpetrators of domestic violence. Their collaboration is juxtaposed with scenes from 1835, when Cherokee Nation was eight hundred miles to the east in the southern Appalachians. That year, Sarah’s and Jim’s ancestors, historic Cherokee rivals, were bitterly divided over a proposed treaty with the administration of Andrew Jackson, the Treaty of New Echota, which led to the nation’s removal to Oklahoma on the infamous Trail of Tears.