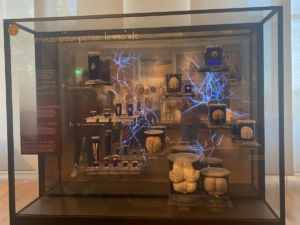 On Monday, June 13th, we took a class visit to the Musée de l’Homme which is an anthropology museum. Its yearround exhibition focuses on the evolution of humans and human societies. Pictured above is a display that caught my attention called “ A brain to think  about the world.” The neurons painted in the display lit up in a lightening fashion, modeling the speed and connection in neural signaling. In the picture, you can also see the different brains of different animals, including an elephant and dolphin’s. It always amazes me to be able to see such significant differences in brain sizes when comparing them to ours!