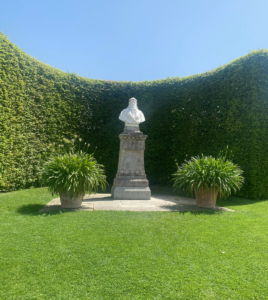 On Friday, June 17th, we took a class visit to the Loire Valley, where we took a tour of Amboise Chateau where Leondardo Da Vinci’s remains can be found in the chapel. I had no idea that that he was buried in France, so it was so exciting to visit a location where he once worked on ground-breaking discoveries. He is recognized for his early contributions of anatomical sketches, amongst his other titles as engineer, painter, theorist, architect, and scientist. For neuroscience, he produced neuroanatomical depictions of the brain, skull, and cerebral ventricles as he attempted to localize the sensory and motor functions in the brain. It was so inspiring to be surrounded by his sketches and work, clearly a great example of curiosity and innovation!