Attached above is a picture I took of the sunset while enjoying a picnic with some French friends on the river Seine. I remember thinking when I first got to Paris, that I wasn’t sure I could live somewhere so devoid of natural spaces to enjoy. Yes, there are ample parks, but surely it couldn’t compare to my home in Virginia. However, to my surprise, it was the Seine that provided me comfort and soothed some intermittent waves of homesickness – now it’s no Potomac, but it’ll do. I’ve always known green space to put me at ease, so this preference for the river over parks was unexpected. But nevertheless, it was my near daily walks on the Seine that brought me peace this summer. I found a study that looked into the effects of the visibility of “green space” versus “blue space” on psychological distress in Wellington, New Zealand. The results of the study corroborate my individual experience, as they found that residential exposure to visible “blue space” was associated with lower levels of psychological distress.

This past Monday, the class got to visit the Musee de l’Homme right outside the Trocadero metro stop – Paris’ 20th century anthropology museum. It includes a unique collection of artifacts which are organized to represent human evolution and cultural variation. The nature of the museum is such that it takes on not only an anthropological approach, but also biological and ethnographical ones.  Included above is a picture of Robina and I standing in front of a display case showing the brains of various different animals. I was very surprised to see some tiny brains, like an alligator’s brain which is about the size of three grapes. I was equally surprised to see some very large brains, larger than ours. This took me back to NBB201 and got me thinking about how the objective size of a brain is not what’s important to determining intelligence, rather it is the brain to body weight ratio.

Last week, we visited the Musée de l’Homme, an anthropology museum. Upon our arrival, I was stunned by its proximity to the Eiffel Tower. There was a beautiful balcony with the perfect view of the Eiffel Tower and part of the skyline of Paris. The museum had multiple floors, displaying the history of man. I was most intrigued by the development of the brain, as I learned a lot about pre-Homo sapiens brains in one of the NBB classes. It was interesting to see the timeline of human evolution and relate that to what I learned in my Introduction to Behavior class at Emory. I was able to recognize the different hominins (our ancestors!) Below, you can see a picture of Ally and I in front of a display of different brains – so cool! The display also included the brains of chimpanzees and gorillas with whom we share a common ancestor.

There was a fascinating interactive display that converted my face into that of a Neanderthal – I felt like a whole new person! I remembered from NBB 201 that our ancestors had flatter and wider skulls in comparison to our more globular skulls. I also really enjoyed learning more about the cultural aspect of our ancestors. I saw the different tools that were used by Homo erectus and Homo habilis. I feel a lot more confident in my understanding of our ancestors and development as humans because of the biological and cultural displays.

One unique aspect of the museum was the wall of tongues – creepy, right? But I promise they weren’t real tongues. They were model tongues and when you pulled them, you were able to hear different dialects from languages across the world. Although I was nervous to touch the potentially germ-infested tongues, I was intrigued by the opportunity to hear a new dialect. My favorite was Tagalog which comes from the Phillipines! 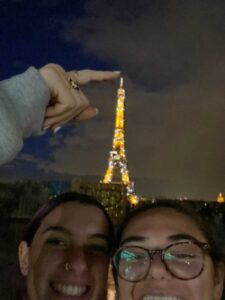 Last week, my friend Emma came to visit! In true tourist fashion, we decided to go to Trocadero to get a good view of the Eiffel Tower and watch it sparkle as the clock hit midnight. The area was crowded and full of people who undoubtedly had the same genius idea as us; the human desire to see something sparkle is evidently quite strong. While we stood there marveling at the monument in all its opulence, we both noted how we had expected the Eiffel Tower to be bigger than it really was. This got me thinking about perspective – from only ever looking at images, we overestimated the size of the Eiffel Tower. But from another vein, in an image, such as the one posted above, the Eiffel Tower might look tiny in comparison to us standing in the foreground – so how does the brain know that this is a matter of perspective, not the Eiffel Tower’s actual size? In a PubMed search, I found a study that actually looked at perspective and estimation of size in regards to the Eiffel Tower! The study found that when leaning to the left, participants estimated the Eiffel Tower’s size to be smaller than participants that stood upright or leaned to the right. Even something as small as posture affects our brain’s perception of an object. 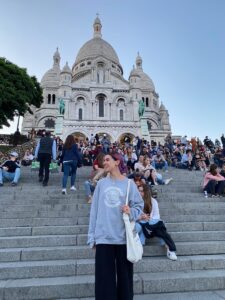 Last week, I finally made it out to see the gorgeous and breathtaking basilica of Sacre Coeur at Montemarte. This 19th century architectural wonder sits upon the highest point of the city of Paris. From its summit you can look out onto the bustling city below and admire its sprawling grandeur. The steps leading up to the basilica are lively and full of many different types of individuals all gathered to marvel at the very same view – making Montemarte arguably the best spot for people-watching in all of Paris! I myself spent a good hour just observing the surroundings and was pleasantly surprised when a man began to play live music on the guitar and many of the people around me got up to dance. The response was endearing, and dare I say magical. It got me thinking on the therapeutic quality of music, for which I found a study that found that music has a direct impact on the autonomic nervous system. For patients in end of life care, music has been found to reduce stress, pain, and anxiety, while enhancing well-being and compassion.

Last Saturday, Lauren, Sam, Rachel, another friend, and I woke up early to venture out into the countryside of France. We took a 45 minute high speed train to Reims, the city known as the unofficial capital of the Champagne wine-growing region. Many champagne houses are headquartered here, and offer tastings and cellar tours. Reims is also home to the Cathédrale Notre-Dame de Reims, a beautifully grand cathedral filled with stained-glass windows and Gothic carved portals, and has been where French kings were crowned for over 1000 years. Throughout our day of (many) champagne tastings, we tried to hone our skills and refine our palates in order to appreciate all the layers of the wines we were tasting.

Our servers commonly related the flavors of each wine with a different food. “The chardonnay offers a freshness of green apple at the beginning, and the ending flavor from the pinot noir is fruity like strawberry”. It made me wonder how in fact the intricacies of the combined biomechanics and brain mechanisms responsible for the taste come together to help us achieve the tasting of various flavors in wine. Believe it or not, there is an interdisciplinary field known as neuroenology that looks into just that.

A 2015 article by Shepherd details how this discipline investigates the contributions that science make to the enhanced quality and appreciation of wine. Many are quick to cite taste buds as the sole proprietors of flavor, however the olfactory system also plays an essential role. Olfaction begins when odorant molecules enter the nasal cavity via inhalation through the nose, or rising through the mouth from food or drink. These molecules then are able to bind to various receptors that send signals to the olfactory bulb, which activates other cascades of neural signals responsible for smell recognition, memory, and emotion (Shepard, 2015). When sniffing a glass of wine, the aromatic compounds released from the wine activate the olfactory system in a similar manner to flavor and scents previously encountered in life. In our wine tasting, we were instructed to pull a bit of air through our lips while the wine is in our mouth to aerate the wine. This further releases aromatic molecules from the wine.

Unfortunately, I cannot say we mastered the art of wine tasting by the end of the day, but the experience was truly enjoyed, nonetheless. Perhaps it is time to take up some studies on neuroenology.