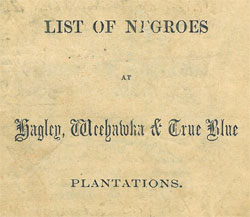 A bibliographical mystery in MARBL's rare book collection is a small eleven page pamphlet, published in 1860, titled List of Negroes at Hagley, Weehawka & True Blue Plantations. The text is an inventory of slaves with the name of the plantation followed by the name of the plantation owner and the names of the individual slaves, divided into men, women and children with “House servants” being a separate category for True Blue plantation. 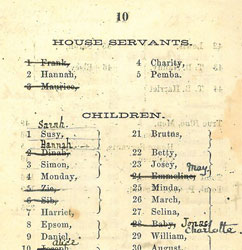 Page from List of Negroes at Hagley,Weehawka and True Blue Plantations,1860

The puzzle is in why this inventory was printed in the first place. It was printed in Charleston, S.C. by the large firm of Walker, Evans & Co., presumably for Plowden C.J. Weston. Normally a handwritten ledger would be the appropriate way to record slave holdings. With such a large number of slaves, births and deaths would quickly render the printed document out of date. Perhaps the printed inventory was a means to demonstrate wealth to others or was the date of printing on the eve of the Civil War a factor?

This little publication becomes even more interesting as the text was annotated by hand in 1864 to record changes to the slave population at each plantation. Again, why annotate this small printed inventory when a large ledger book would be more practical and customary? We will likely never know but the resulting document is a fascinating record of the slave holdings of three South Carolina plantations during the Civil War.

Today, the Hagley and Weehawka plantations are housing subdivisions while the True Blue plantation is a notable golf course.