In 1960, the Atlanta Journal-Constitution took on an enormous project to offer the people of its city an engaging look back at the Civil War period. Heavily researched by Norman Shavin, The Atlanta Century is a collection of weekly newspaper mockups that appeared as a series for over five years, offering its viewers a look at the tumultuous 1860s with the benefit of hindsight. 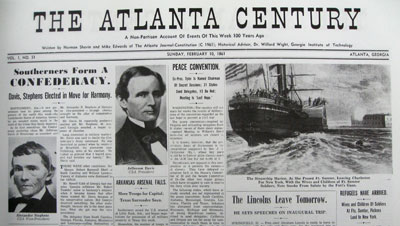 Each week in the Sunday edition from March 1960 until May 1965, a full-page spread documented the corresponding week's events from a century before. Constructed to look like an actual newspaper front page from that time, included in each entry are numerous articles and fascinating images and political cartoons, as well as classified ads. The news isn't just about the war, but is meant to be an overview of what was happening in Atlanta and the country during this time of upheaval.

There are 272 pages, one per week, and a special edition to document the election of Abraham Lincoln in the entry dated November, 7, 1860. You can also find interesting information about Emory College, such as the fact that the Board of Trustees were forced to close its doors in 1861 due to drops in attendance as a number of students were off fighting for the Confederacy. While there were hopes at the time that the college would not be down for long, it would turn out to be four years before they could again accept students and resume a normal curriculum. In that time, the college was used as storage and a medical facility for wounded soldiers. 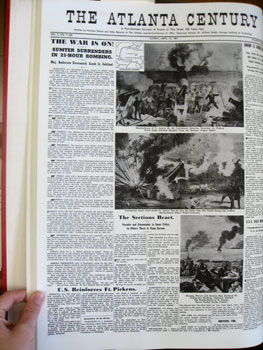 Full-page spread from The Atlanta Century,featuring the fall of Ft. Sumter

What I find most interesting about looking through this book is that it is written as if these events have just happened, but in reality they are a century old. One can't help but think about how one hundred years of study and research shaped what were considered the important facts to include each week. So while an interesting historical venture, it is not something that should be considered a primary source. As an undertaking though, it is the longest-running series in a newspaper, and it must have been a treat for Atlantans in the 1960s to anticipate each week.

It may prove to be a useful reference source for date and event verification, and is an entertaining read for the amateur historian. If you are a Civil War and Atlanta novice, like myself, the format makes it easy to absorb an overview of southern life in the 1860s.