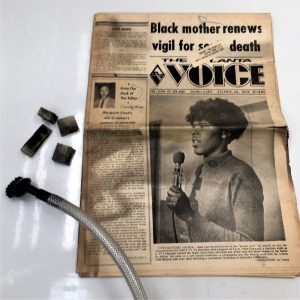 This collection item was treated for mold and soot. It was cleaned, using a HEPA vacuum and vulcanized rubber soot sponges.

While conducting conservation treatment of particularly damaged rare books and other special collections materials, I sometimes imagine the adventures and misadventures which might have brought a page (and perhaps its reader) to such a state. Is that water damage and sandy residue evidence of a shipwreck? Is this dried, pressed leaf from one of the few trees on a desert island? Were pages torn out for a hasty message in a bottle? What kind of insect is that!?

Seldom am I able to trace a precise provenance of damage, but my treatment of Rose Library’s Great Speckled Bird records provided that rare occasion.

The Great Speckled Bird was an Atlanta-based, counter-culture, underground newspaper published from 1968 to 1976.

This collection came to the Emory Libraries conservation lab for evaluation of mold remediation. The papers had been partially processed by archivists and arranged by date and type of material before some mold residue was discovered. As a precaution, we quarantined all possibly-compromised materials (approximately seven linear feet). A page-by-page process began with examination and vacuuming inside a fume hood outfitted with HEPA and charcoal filters, in order to protect future researchers from allergens and prevent contamination to other collections. 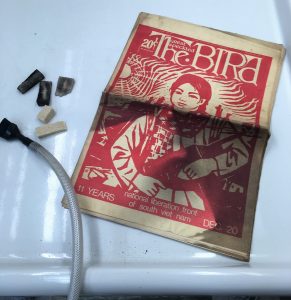 This issue of the newspaper was brittle in addition to fire and water damaged.

I discovered a fairly typical pattern of damage. Where I found mold residue—from dry surface debris to rainbow-hued stains—I also found water-damage in the form of tide-lines, occasional cockling, rusty staples, and more infrequently, frass (insect waste), all indications of a water intrusion incident. Then, I found dramatic evidence of a fire and additionally began treating the papers with soot sponges.

Another several hundred pages into the treatment, I came across an essay, The Great Speckled Bird: A History of Harassment, written by Doug Gordon for a term project in 1976. I learned that at 5 a.m. on May 6th, 1972, a Molotov cocktail—or gasoline-fire-bomb—was thrown into the newspaper’s office. This explained the date-range and pattern of damage to the collection items. 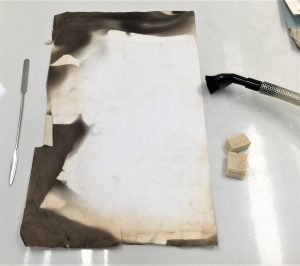 Once the conservation team has completed treatment and Rose Library archivists have finished processing, the Great Speckled Bird records will be available to researchers.