Emory Libraries have purchased several new databases in recent months that will greatly enhance student and faculty research and classroom teaching and learning, and this new blog series strives to highlight each new database individually. 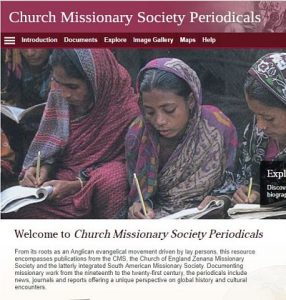 The CMS, an Anglican evangelical organization, was formed in 1799 in London. The society always had a global focus, and within its first 20 years established missions in Sierra Leone, New Zealand, Malta, India, and Sri Lanka. The CMS continued to expand its presence around the world over the 19th and 20th centuries. Arun W. Jones, Dan and Lillian Hankey Associate Professor of World Evangelism at Emory’s Candler School of Theology, notes that “the CMS was arguably the largest and most extensive Protestant missionary society of the 19th and 20th centuries.”

SAMS, originally the Patagonian Missionary Society, sought to spread Christianity to South America’s indigenous peoples starting in the mid-19th century. SAMS missionaries’ activities over the last 150 years were concentrated in Argentina, Bolivia, Chile, and Paraguay. In 2010, the mission merged with CMS.

The CEZMS formed in 1880 to evangelize the women of India through teacher training colleges, medical missions, female schools, and home visits. The mission expanded its women-focused outreach to China, Japan, Singapore, and Sri Lanka over the next several decades. In 1957, the organization amalgamated with the CMS.

Emory faculty are already envisioning incorporating Church Missionary Society Periodicals into their teaching. Tehila Sasson, assistant professor of history, will use the database in courses like “The Origins of Human Rights,” “Global Aid in an Unequal World,” and “Britain, Empire and the World,” where she works closely with students on how to analyze primary sources.

Church Missionary Society Periodicals is available now via our licensing agreement to current Emory students and faculty at the links below.