Could smallpox have changed the outcome of the American Revolution?  Leaders worried that it could.  George Washington and Thomas Jefferson both went to tremendous and dangerous lengths to obtain inoculations against deadly smallpox. 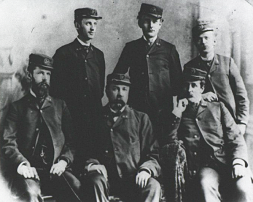 Six men are posed wearing the uniform of the Public Health Service in 1878. Image from National Library of Medicine

Washington sought to inoculate the entire Continental Army during the Revolutionary War, and Jefferson was so thrilled by the development of the safer smallpox vaccine that he personally vaccinated a number of people.

Let us add that Washington’s inoculation program had to be done on the sly so the British wouldn’t find out and Jefferson was handling vaccinations when he was also serving as president.

These are a few of the highlights of the new Before Ebola exhibit that recently opened on Level 2 of the Woodruff Library. Other items of interest include 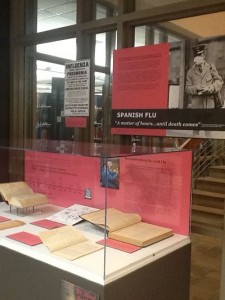 ·       the history of the more recent HIV/AIDs campaign

All along, the government was developing a public health service, starting with the Marine Health Service in 1798 and continuing to our neighbors, the CDC.

Beyond telling the story of contagious disease control Before Ebola, the exhibit spotlights the Woodruff Library’s rich collection of federal documents, housed on Level 1. The earliest document displayed is the Annals of Congress for 1798 which is a predecessor of the Congressional Record; among the most recent is the federal brochure about AIDS which was mailed to 107 million households in 1986 to provide accurate information about the disease.

The Before Ebola exhibit runs through Summer 2015.

A research guide for the exhibit is available at http://guides.main.library.emory.edu/beforeebola​.