In the first of three blog posts on the audio visual material contained in the SCLC collection, “New Insights into the Early Political and Philosophical Thought of Jesse L. Jackson,” I noted the wonderful range of media, from cassette tapes and reel to reels to VHS and DVDs, which offer insight into the many activities undertaken by SCLC.  In this second installment, I discuss audio material documenting SCLC’s historical engagement with exposing and combating healthcare problems in the U.S. 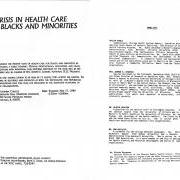 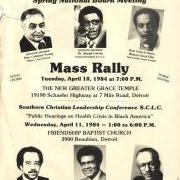 SCLC has a long history of championing the causes of poor and black Americans, most notably seen in the Poor People’s Campaign, the brainchild of SCLC’s founding president Martin Luther King, Jr., and Operation Breadbasket, an initiative started in 1962 and one whose Chicago branch was spearheaded by Jesse L. Jackson.  Beginning in the 1980s, however, SCLC really initiated a national dialogue about healthcare through a series of hearings conducted as part of a thematic endeavor they called the Crisis in Healthcare for Black and Poor Americans.  In 1984, in major cities such as Chicago, Illinois; Detroit, Michigan; Birmingham, Alabama; Los Angeles, California; Miami, Florida; Kansas City, Missouri and other urban centers, SCLC facilitated local forums on healthcare that included SCLC officials, local healthcare administrators and medical practitioners as well as community activists and leaders.  Over two dozen cassette tapes document the many conversations and debates which characterized this attempt by SCLC and partner organizations to rectify a growing problem of healthcare at both the local and national level. 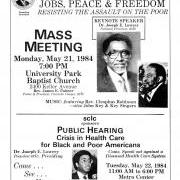 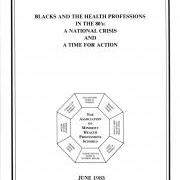 In the wake of the recent overhaul in health care in the U.S., it seems timely to reflect on the role that organizations like SCLC played in prioritizing healthcare as a concern of national policy and civil and human rights. Scholars interested in the cultural history of healthcare debate and policy in the U.S. will find these untapped sources rich, particularly in terms of demonstrating the effects grassroots organizations have played in shaping the national discussion on healthcare and public policy.