In 1975 the Voter Education Project (VEP) embarked on one of its most ambitious voter education and registration campaigns: Project Georgia 23.

Project Georgia 23 was a “voter education, registration and leadership training program. It [was] designed to increase minority political participation in the Georgia counties with a Black majority population.” The project targeted 23 counties in Georgia.

Initially, Project Georgia 23 was funded through a grant by the Voter Education Project, but also had an independent Board of Directors that did fundraising. The project also received promotional and administrative support from “Georgia Social Action ‘76”, a program formed by the Atlanta Pan-Hellenic Council to support non-partisan political action programs. The Georgia Association of Black Elected Officials also supplied support through manpower, in the form of speakers, field workers, and resources for education workshops. 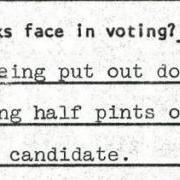 The initial project description described some of the issues facing Black voters in Georgia, 1975. Click image to enlarge.

The first step of the project was to send field workers to each county to meet with local officials and politically active citizens in an effort to find people willing to coordinate voter drives and organize educational workshops and rallies. The project targeted specific groups, such as “civic, church school, Masons, Elks and other community groups.”

Of particular interest was the power of Black churches, ministers and church leaders and the project contacted them through a direct mail campaign. Writing to them for help in organizing community meetings, the project wrote that “the Black Church…has been one of the strongest elements in our history. Throughout Black History the church has been significant in shaping political decisions both nationally as well as locally.”

Field workers were not only trying to find willing participants in the project, but also to collect stories about problems that Black citizens faced. These stories were not necessarily about voting or government, but sometimes reflected de facto segregation policies still in place in Georgia. 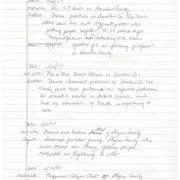 In these notes taken in the field, the author includes a complaint that Decatur County doctor’s office still had segregated facilities, 1977 February 8-17.  Click image to enlarge.

Project Georgia 23 also relied on the star power of some Black politicians to promote their educational workshops and registration drives. Atlanta Mayor Maynard Jackson kicked off the Southeastern leg of the project with a motorcade from Bambridge to Albany. State Senator Julian Bond was also involved as a speaker and supporter. 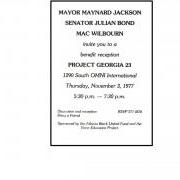 In 1978 transitioned from having a Board of fundraisers to being solely supported by the Voter Education Project, with staff reporting directly to the Voter Education Project Field Director.  At that time the project narrowed its focus to 13 counties that research had identified as needing the most attention. Many of these counties were also the home of other VEP funded projects.