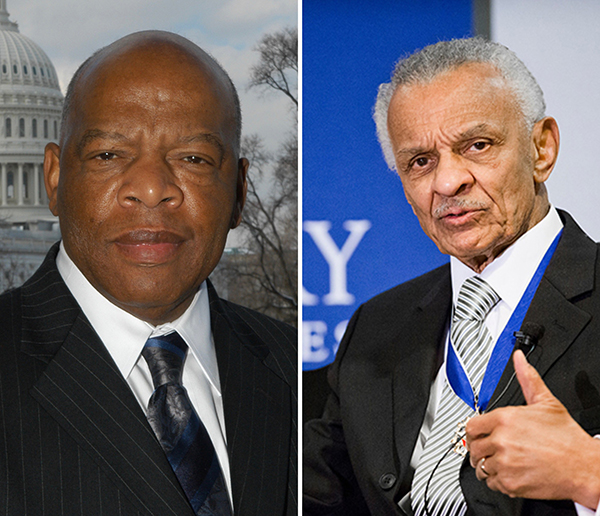 In the wake of the passing of a pair of civil rights icons, John Lewis and C.T. Vivian, the Emory Libraries Diversity, Equity and Inclusion (DEI) Committee invites you to share your thoughts about these men and the impact they have had on you.

As news of the passing of John Lewis spread, my social media feed became loaded with stories of personal interactions with him: how he showed up at a bike repair shop, jogged in a Pride parade, taught an environmentalist about getting Black taxpayers into national parks, or shaking hands at a school.

To be an Atlantan seemed almost synonymous with meeting John Lewis. So, in reflection, whether you have your own John Lewis interaction or not, what would you say in a letter to him or what would you thank him for?

Sadly, C.T. Vivian passed on the same day, so it also seems right to include him as well, thanking him for his service to non-violence and civil rights, so if you have a C.T. Vivian story or interaction, you’re invited to write him a thank you note as well. Our plan is to collect these stories for an article or pop-up exhibit.

Below are two examples that I wrote:

I remember hearing you speak in person for the first time at a tiny rally in Piedmont Park. You challenged my own willingness to settle and changed my mind on gay marriage as an issue when you said, “Civil unions is a term to make straight people more comfortable. Fight for the word marriage, because anything else is separate but not equal and separate can never be equal.” Thank you for your intersectionality, for seeing even what I did not. Thank you for modeling what showing up for each other looks like.

Thank you for illustrating through non-violent action the ways Christianity and racism are not compatible. Rest in power from your diligence.