Emory Libraries and the Emory community are mourning the passing on Friday (July 17) of Rev. C.T. Vivian, 95, a civil rights leader who worked alongside Martin Luther King Jr. and spent his life speaking out for equality for African Americans. 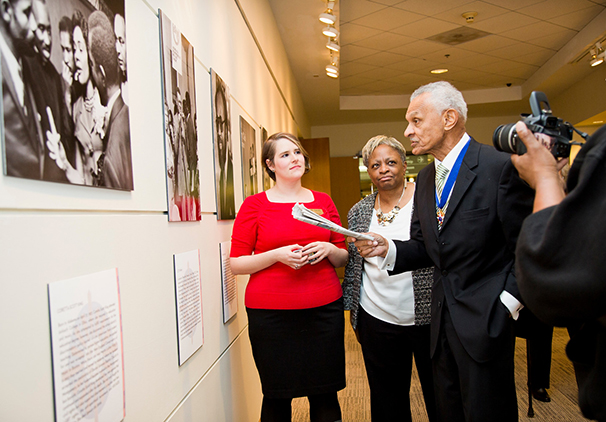 Rev. C.T. Vivian tours the SCLC exhibition in 2013 with two of the co-curators, Sarah Quigley (left), Rose Library head of collections processing and the project archivist for the SCLC collection, and Carol Anderson, Charles Howard Candler Professor and chair of African American Studies at Emory.

A Baptist minister, activist, and author, Vivian received the Presidential Medal of Freedom from President Barack Obama in November 2013, and he came to Emory the next day for a public conversation at the Woodruff Library with Emory associate political science professor Andra Gillespie.

He placed his papers and those of his late wife, Octavia, with the Stuart A. Rose Manuscript, Archives, and Rare Book Library at Emory University in 2014. The papers augment the Rose archive of the Southern Christian Leadership Conference (SCLC), the civil rights organization started by King that pushed for an end to poverty for black families and equality for African Americans.

“Rev. Vivian was instrumental in bringing the SCLC archive to the Rose Library at Emory,” said Dean and University Librarian Yolanda Cooper. “His place in the civil rights movement, fighting to secure equality and voting rights for African Americans, will not be forgotten. He never wavered, even in the face of hatred and violence. We will miss his strength and passion for justice and equality.”

“We have been privileged to know and learn directly from Rev. C.T. Vivian,” said Jennifer Gunter King, Rose Library director. “The Rose Library is honored to be able to help future generations engage with, learn from, and build upon his legacy.”

Cordy Tindell Vivian was a legend in the civil rights movement, having joined the SCLC executive staff alongside Martin Luther King Jr. in 1963. Born July 30, 1924 in Boonville, Missouri, and educated at American Baptist College in Nashville, he participated in his first lunch counter sit-in in 1947. He took part in the Freedom Rides to end segregation in the early 1960s; he was arrested after one Freedom Ride in 1961 and sent to Parchman Prison in Mississippi, where he was beaten by guards. 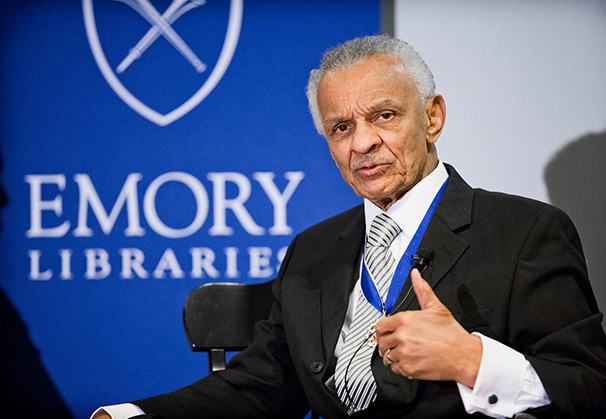 Rev. C.T. Vivian during his 2013 conversation at Emory’s Woodruff Library.

He is known for his altercation with segregationist Sheriff Jim Clark, who punched Vivian on the courthouse steps in Selma, Alabama, in 1965 as he tried to escort a group of African Americans inside to register to vote. The repeated police brutality against nonviolent protesters shown on television news coverage, particularly on March 7, 1965 (Bloody Sunday), was an eye-opener for the American public and a driving force behind President Lyndon Johnson’s signing of the Voting Rights Act in August 1965.

Vivian became a well-known and respected preacher and went on to found or co-found other civil rights and anti-racism organizations, including the Center for Democratic Renewal (originally called the National Anti-Klan Network), an organization that infiltrated and monitored hate groups.

Vivian and Octavia, who passed away in 2011, were married for 58 years. Octavia was both a historian of the civil rights movement and an active participant, as were many of the wives of the SCLC leaders. Octavia was a member of the SCLC/Women’s Organizational Movement for Equality Now Inc., and she documented the role of women in the civil rights movement as well as her husband’s role in the struggle for equality. She also wrote “Coretta,” the biography of Coretta Scott King. The papers of SCLC/W.O.M.E.N. are also housed at the Rose Library.

Watch the conversation with C.T. Vivian and Andra Gillespie on YouTube