Before I move into the Civil War period, I wanted to make sure readers of Discovering Atlanta had a good sense of what was going on in the decade before. It can be difficult to process just how small Atlanta was in the 1850s, and how things changed so rapidly. While it was moving swiftly, it was still a modest town prior to the Civil War. The changes which occurred in this decade can be seen most clearly in maps of the era and through comparing contemporary population demographics with historical city data.

As mentioned in the book Atlanta and Environs: A Chronicle of Its People and Events, vol. 1, in 1850, William Goldsberry determined that in the city of Atlanta, the white population totaled 2,058. In addition, there were 18 freedmen and 493 slaves. (p. 305) The city of Atlanta had a 2010 population of over 420,000. To get a sense of how small Atlanta was in 1850, it might be helpful to know that in the 2010 census, Oxford, GA, the original home of Emory College and now home to Oxford College of Emory University, boasted a total population of 2,555. (2010 US Census) So our booming metropolis was, at one time, just a speck on an old map. 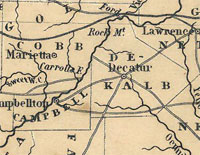 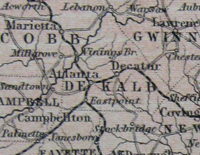 Speaking of maps, MARBL has a fascinating collecion. It's interesting to see how the landscape changed in just a very short time. In the first map above, from 1845, you'll see that Atlanta isn't even included. It was only in 1843 that Marthasville had been incorporated, but even that doesn't show up on this map. You can distinctly see, however, in the map from 1850, that Atlanta had made its mark. This map also illuminates the railroad lines which terminated in Atlanta.

This area was originally all DeKalb County, and the year 1853 saw the creation of Fulton County. I thought it was interesting that we had maps from both 1854 and 1855, shown below, to illuminate how, from one year to the next, major changes occured. By the start of the 1860s, the population would grow to over 9,000, and was already made up of prominent families that would contribute significantly to the shape of Atlanta. 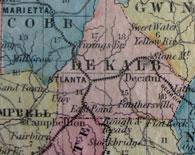 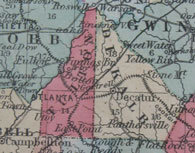 Still, with a population of less than 10,000, Atlanta was not the metropolis one might think of when they picture Sherman's march and destruction of the area. The 1850s were significant, in that they created the foundation for a city that was able to resume its meteoric rise even after the Civil War. This can be seen most clearly in the fact that even with the casualties of war, the population of Atlanta in 1870 more than doubled from a decade before to over 21,000.

The maps continue to change and grow with the city, and we've got quite a few leading right up to the turn of the century. Stop by MARBL some time and get lost in our historic map collection. And if you can't see them in person, take advantage of the online MARBL Digital Historic Map Collection which is constantly being updated and will soon include the maps featured here.