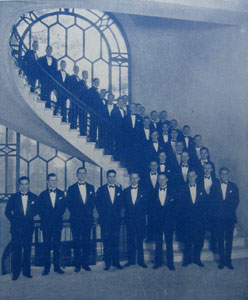 In the 1920s, the Emory University Glee Club was a blockbuster group, touring not only all of Georgia and the South but also New York, Washington, Havana, London, Paris, and Amsterdam. Founded on the Emory College campus in Oxford, Ga., the club moved to the Atlanta campus and was more formally organized soon thereafter. But the year 1920 marks the beginning of the Glee Club's celebrated history, when Professor Malcolm Dewey became the director. 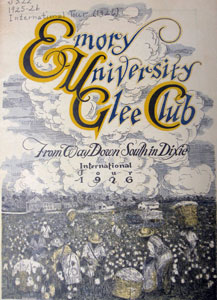 After successful tours of the South, the Glee Club embarked on an international tour in 1926. They performed at the London Coliseum opera house and made stops at many seaside resort towns at the height of the summer. The Glee Club also enjoyed a game of baseball with American expatriates in London and had a luncheon at the home of Lady Astor, the Virginia-born wife of the wealthy Anglo-American Waldorf Astor, and the first female Member of Parliament in the House of Commons.

The Glee Club sang a mixture of traditional songs and more popular tunes, including a large number of African American spirituals. They performed arrangements that were produced commercially, including those by H. T. Burleigh, some of whose materials were recently acquired by MARBL. These spirituals became a major part of the Glee Club's appeal; their international tour in 1926 was entitled “From Way Down South in Dixie” and the tour program featured a stereotypical illustration of a Southern cotton field.

While most of its repertoire highlighted vocal talents, Glee Club members also knew how to entertain in other ways. One of the Glee Club's annual concerts was a “stunt night” held on campus for students. The stunt nights were the ultimate in informal Glee Club performances. Hardly a song or skit was meant to be taken seriously; one program includes a skit called “Jomeo and Ruliet.” The Club incorporated comedy into their travelling shows as well: this photograph shows some Glee Club men dressed for a performance at Florida State Women's College in Tallahassee, Florida. Judging from the head-to-toe costumes, the Emory University Glee Club wasn't kidding around when it came to entertainment. 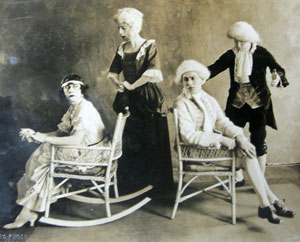 All of these events are well documented in the Emory University Archives. The Emory University Glee Club records include not only correspondence, programs, newspaper clippings, press releases, and audio recordings, but also 65 scrapbooks and bound volumes.  The scrapbooks manage to consistently document the Glee Club's activities between the 1920s and the 1960s. A finding aid for the records will soon be available online to assist researchers and help illuminate the Glee Club's unique role in Emory and Southern history.