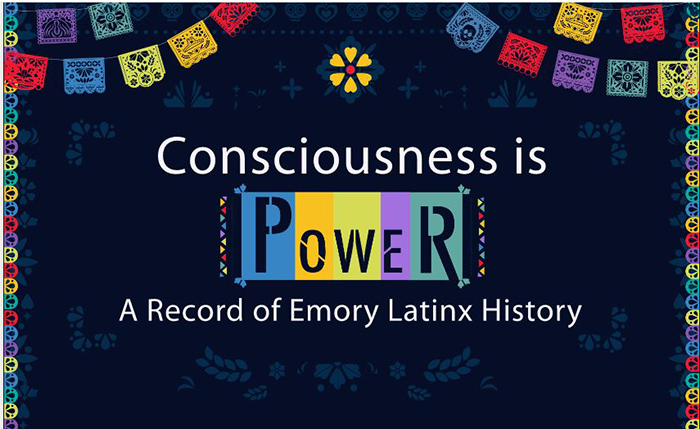 Emory Libraries is honored to be celebrating Latinx/Hispanic Heritage Month by showcasing the first ever Latinx pop-up exhibit at the Robert W. Woodruff Library on Level 2 from September 15 to October 15. The exhibit is curated by Arturo Contreras, a fourth-year student majoring in Latin American & Caribbean Studies in the College of Arts and Sciences.

Growing up in a Mexican-immigrant household in small-town Monetta, South Carolina, gave Arturo a view of the rural south from a unique cultural perspective. It was not until his third year at Emory that he was able to have the tools and frameworks to compose what he experienced into words. He is thankful to the Latinx community at Emory for all the resources provided to him and others: the Latinx faculty, staff, and peers.

As a student, Arturo wanted to integrate his community work into his academic life. In spring of 2022, he enrolled in Yamileth “Yami” Rodriguez’s special topics history class to expand as a scholar in the field of Latinx Studies. Rodriguez, an assistant professor of history at Emory, inspired and supported Arturo to propose his exhibit project to the Emory Libraries Events & Exhibits team. He says, “Yami’s presence is what Emory needed, especially for students wanting to be involved with their respective communities. Her field of study and method of facilitating makes the classroom an environment of belonging and safety to explore intellectual curiosity.” As a result, Arturo became a Mellon Mays Undergraduate Fellow, which allowed him to pursue his independent research on understanding the place-making of Latinx communities by focusing on the intersection of Latinx Studies and Museum Studies.

He writes, “Transitioning from a working-class rural life to an urban elite space as a queer Latino and first generation/low-income college student, I have encountered many difficulties at Emory. While exploring every academic discipline at Emory along with balancing the demands of a working-class life, I struggled with the idea of finding a passion. I learned, however, that passion is not only constructed by academic interests, but also by an essence of safety, belonging, and understanding,” he said. “It was not until spring 2022, when I enrolled in Profe Yami’s special topics history course Migrants, Borders, and Transnational Communities in the U.S., that I shared a cultural background with a professor. The class experience allowed me to expand my knowledge in Latinx studies and shaped my current research interests as a Mellon Mays fellow. ‘Consciousness is Power’ is the result of archival research alongside conversations with faculty, students, staff and alumni that share an interest in recognizing, preserving, and building Latinx history at Emory.”

The Emory Libraries Exhibits team is excited to be working alongside Arturo. The curation and display of the exhibit constitute acts of recognition and memorization by harnessing a physical place on campus to showcase the social, cultural, and personal connections that animate Latinx Emory history. The exhibit includes archival documents and print materials that highlight Emory’s Latinx-related histories from the late 1980s through the present day. The materials emphasize diverse endeavors by Latinx students, faculty, staff, and allies who sought to highlight and maintain a Latinx presence at Emory. The name of the exhibit commemorates the legacy of the student movement in 2018 and continued efforts to preserve and build upon the institution’s Latinx history.

The exhibit brings forth the groundwork made by past and current community members advocating for a Department of Latinx Studies at Emory. In 2018, a group of students wrote a letter to the Emory president and stated, “Through our demands, we join a rich tradition of student activism at Emory that dates back to 1969 when the Black Student Demands pushed for the development of an African American Studies department at Emory.[1] Black struggles at Emory created a foundation for Latinx students and other student groups today. The Department of African American Studies counts on our support; however, in this letter, we will emphasize the need for a Department of Latinx Studies because it has yet to exist at Emory.”

Emory plays a huge role in education in the U.S. South, and has the responsibility to understand the social, cultural, political, and economic climate of the rapidly growing Latinx demographics in the south.

The students also stated in the letter, “The explosive growth of the Latinx population across the state and nation is at the forefront of a major demographic shift and it is a major reason why this department is so important for the future of Emory University. Between 2000-2015 Georgia had the fastest growing Latinx population (118 percent) among states with the largest Latinx populations such as California, Texas, and New York. Latinx currently make up 10 percent of Georgia’s population; in Georgia public schools, they represent 13 percent of the population since 2013.”[2]

The pop-up exhibit marks the first effort to contextualize historical materials and cultural contributions of Emory’s Latinx community to show the importance of having a physical place to preserve diverse institutional memories and nourish a Latinx consciousness on campus.