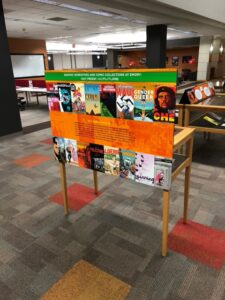 Graphic narratives are a growing area of study and literary expression. Graphic narratives provide a different experience than a prose narrative, and demand what some have called a “double literacy” of the visual and the written word. This exhibit focuses upon the expansion of Emory’s collections in in this genre, including comics and long-form graphic novels. In addition to providing an overview of the genre, the exhibit also features three in-depth “sub-exhibits” of graphic novels and comics that illustrate how the genre allows for the expression of alternative perspectives and narratives that challenge accepted political, economic and social institutions. Oxford and Woodruff Libraries hold over 6,000 volumes, comprised of both primary works and secondary studies of the genre and specific authors, and Rose Library holds more than 600 in its rare book, manuscript, and archival collections.

Although the main exhibit is in Woodruff Library (level 2), we are also highlighting the excellent, long-standing graphic novel collection at Oxford College Library. The accompanying exhibit libguide provides further exploration of the genre, with essays dedicated to the role of comics in visual literacy and a short history of Manga. We have included a browseable representative collection–please feel free to check these titles out! Check Library Search for further titles, using terms such as “comics” or “graphic novels.” You can also browse the Stacks, focusing in on the PN6700s, although graphic novels, dependent on subject, can be found throughout the collection.

Graphic novels and narratives are not particularly “new.” Graphic novels indeed have deep roots. Their precursors date to the late 17th and 18th centuries, and the genre builds on a 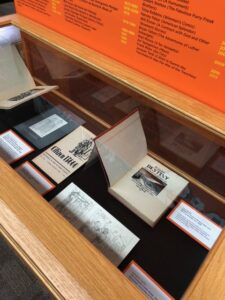 long history of graphic storytelling, wordless novels, illustrated narratives, and Japanese manga. The exhibit also highlights some notable precursors to the graphic novel, such as the Four Immigrants Manga, Destiny: A Novel in Pictures, and Citizen 13660.

Afrofuturism: The materials in this case feature books housed in the African American collections at the Stuart A. Rose Manuscripts, Archives, and Rare Book Library. These works all focus on the lives of diverse characters from Africa and the African Diaspora as they travel the universe, invent complex technologies, prot 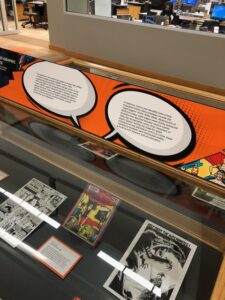 LGBT Comics: From underground and alternative lesbian and gay comics in the 1970s and 80s to the increasing presence of trans comics today, LGBTQ+ graphic narratives span a fantastic array of genres and forms. Comics and graphic novels that depict LGBTQ+ experiences from an insider’s perspective are rich sites of collective memory, counter histories, cultural commentary, and imagination.

Experiences of Colonialism/Immigration/Migration: This is the first installment of a series of revolving exhibits on the production and use of graphic narratives and novels as a means to engage with the experiences of the colonized, the immigrant, the refugee, the marginalized, and social justice.  There has been a long history and tradition of bande dessinnée and graphic novels in France and Belgium since the 1930s. Early narratives regarding France’s colonial growth tended to focus on laudatory ambitions, such as the French “mission civilisatrice.” Many more recent works have looked to challenge these colonial narratives and shift the discourse to the colonial and post-colonial lived experiences and memories of the colonized and their relationship to France. The works chosen for this case are a relatively small sampling of such works, including those struggling with the continued reckoning with the Algerian War of Independence (1954-1962). Other installments focusing on South Asia and Spanish language graphic novels will appear over the course of the overall exhibit.