Rev. James Hargett was ordained to ministry of the Congregational Church in 1955, and served as an associate minister of the predominately Japanese American Church of the Crossroads United Church of Christ (UCC) in Honolulu from 1955 to 1958.  He was the first African American minister called to serve a Protestant-established church in Hawaii.

The Honolulu (Hawaii) files consist of Hargett’s personal minister’s record book (1955-1957) which includes information about marriages he performed, as well as sermons he preached while in Hawaii. 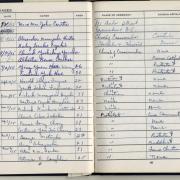 A scrapbook containing correspondence, greeting cards, essays, ephemera, photographs, news clippings, and newsletters is also included.  Of particular note in the scrapbook are Hargett’s notes to his congregants published in The Crossroads News (September 1955), which detail his first airplane trip to Hawaii with his wife, Louilyn and infant daughter, Meloni; thank you notes from Roosevelt high school students after his speech on segregation (November 1955); programs for his installation service (December 11, 1955); a birth announcement for his son Darryl published in The Crossword Chimes (May 1957); and a handmade Christmas card and photograph (December 1957) sent to the Hargett family from the Andrew Young family. 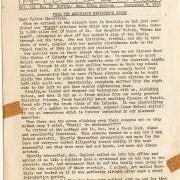 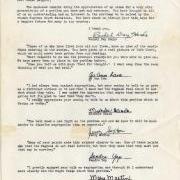 Above left:  The Crossroads News (September 1955).  Above right:  Thank you notes from Roosevelt High school students, 1955.  Click to enlarge. 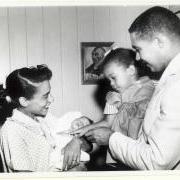 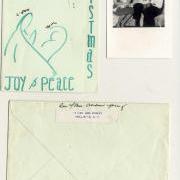 Above left:  Rev. and Mrs. Hargett with daughter Meloni and newborn son Darryl.  Above right:  Christmas card from Rev. and Mrs. Andrew Young and family.  Click to enlarge.