Harry Duncan was a printer of fine press books, professor of book arts, and manager of the Cummington Press. Inspired by the expatriate literary life of T.S. Eliot, Duncan left the Midwest after college in pursuit of more exciting prospects in poetry and art.  While pursuing a Master's degree at Duke University, Duncan spent a summer at the Cummington School of Arts, a Massachusetts establishment founded and run by Katherine Frazier.

Frazier's sharp intellect, fearless ambition, and artistic passion drew a summer crowd of students and visiting writers such as Allen Tate, Marianne Moore, and R. P. Blackmur.  In 1939, the School voted to invest in a handpress. He later described “printing books by hand [as] the one bizarre calling that did seem to have chosen me” (“Cross-purposes,” an autobiographical essay in the collection).  He withdrew from his graduate program to join Cummington full time.  Although Katherine and Harry worked the press together in the first years, Katherine's failing health eventually forced her to leave Cummington.  Early in his career in 1942, Harry published Notes Towards a Supreme Fiction by Wallace Stevens.  The tremendous success of the book attracted more poets to the Cummington imprint than Duncan could possibly accommodate.  However, he soon met a young soldier who wanted to leave the Army and pursue an artistic career.  That soldier, Paul Wightman Williams, joined Duncan around 1943, forming a partnership that would endure until Williams's death in a car accident in 1956. 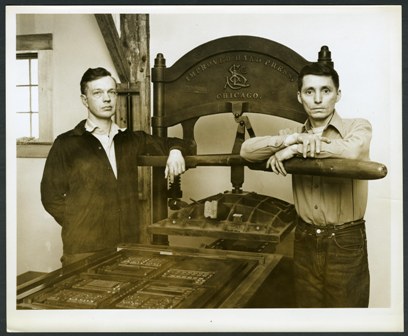 Harry Duncan (left) and Paul Wightman Williams in front of printing press, circa 1955

One cache of letters in the collection stands out as particularly valuable to scholars, teachers, and readers of modernist American poetry.  In “The New England Novitiate,” an autobiographical essay in the collection, Duncan describes the experience of printing Robert Lowell's first book of poems, Land of Unlikeness.  Although Duncan and Lowell did not meet for some time, their correspondence reveals a shared passion for poetry and a common concern about the social effects of World War II.  And yet, faced with incarceration, Lowell was unsure about Duncan's willingness to sign on as his publisher.  Lowell wrote Duncan mid-September of 1943, “I think you should receive a copy of this statement.  Thank you for your sympathetic letters about my poems.  Let me know if you change your mind about publication.”  Included in the correspondence to Duncan from that day was a statement addressed to President Roosevelt in which Lowell refuses to report to the Armed Services.  In an attempt to explain his position as a conscientious objector, Lowell writes the following:

You will understand how painful such a decision is for an American whose family traditions, like your own, have always found their fulfillment in maintaining, through responsible participation in both the civil and the military services, our country’s freedom and honor.

Appended to this document is Lowell's, “A Declaration of Personal Responsibility,” which outlines his reasons for conscientious objecting to the war. 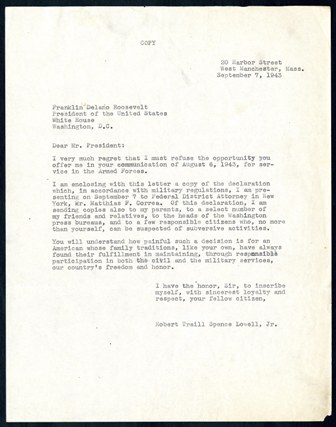 He believed the war had shifted from a defensive effort, aimed at protecting the innocent, to a destructive war in which entire nations were being targeted for destruction.  The 26-year-old poet implored the President to consider that “the crisis of war is past.  But there are no indications of peace.”  Following this exchange, Duncan began to collect newspaper clippings chronicling Lowell's prison sentence and the media's reaction to his incarceration.

Duncan eagerly pressed on with the publication of “Land of Unlikeness,” despite his own personal hardships surrounding the struggling business of the press.  As of September 21, 1943, Duncan started corresponding with Lowell's wife, Jean Safford who saw that Lowell received the page proofs in prison.  After Lowell's release, Duncan began corresponding with him directly on April 26, 1944, writing “I'm glad you're free again.”  The poet responded, “My parole work is wearying and worrying,” but his excitement about the forthcoming book was not diminished.  The persistence of both the poet and the publisher would result in the success of Land of Unlikeness.  Five of the Cummington volume's poems were revised two years later and published with thirty new poems in Lord Weary's Castle, Lowell's second book of poetry and the winner of the 1947 Pulitzer Prize.

The collection at MARBL includes the original typescript manuscript and corrected proofs in Lowell's hand.  MARBL also houses three copies of The Land of Unlikeness, in addition to the correspondence detailed here.  The transmission of editorial and design decisions under the difficult conditions of Lowell's imprisonment make the collection especially valuable for understanding the literary culture of the 1940's.   Part II will focus on the illustrations prepared for the title page of Land of Unlikeness.

Visit the collection's finding aid to learn more about the material and the MARBL website to find logistical information such as hours and directions to the library.