The Benny Andrews exhibition featuring 20 original drawings, dating from 1959 to 2005, on generous loan from The Andrews Humphrey Family Foundation will be on display until November in the corridor gallery of the Woodruff Library, Floor 3. The following is an essay written by exhibit curator Pellom McDaniels III. 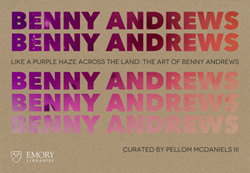 In the 1960s, Benny Andrews garnered the attention of the New York art world as an up and coming avant-garde artist and social activist. His unique, illustrative style and uncompromisingly expressive imagery boldly captured the human condition as he understood it: sad, desperate, tragic, common. By incorporating fabric, paper, and rope into his collages, and using muted and vibrant colors in his surreal compositions, critics recognized Andrews’ works as arresting and disturbing on the one hand; and deeply contemplative and inspiring on the other. His unique approach to art production centered on the thick memories associated with America’s long history of oppression, especially that of slavery and segregation. Andrews, by all accounts, was an original. 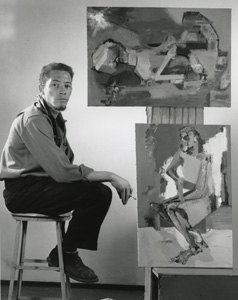 What is more, through his visual art, his prose, his criticism, and his actions as an advocate for social justice, Andrews had a significant influence on the world around him. In January of 1969, he and a number of black artists organized the Black Emergency Cultural Coalition (BECC) to protest the New York Metropolitan Museum of Art’s proposed exhibition “Harlem on my Mind: Cultural Capital of Black America, 1900-1968.” Along with fellow artists Norman Lewis, Vivian Browne, Romare Bearden, Ray Saunders, and Henri Ghent, Andrews recognized that the proposed exhibition represented black culture as more fiction than fact. The protest served as the needed impetus to publicly challenge the practices of museum and gallery officials, whose expectations and understanding of a “black aesthetic” discounted and dismissed the varied experiences, diverse styles, themes, and approaches of black artists. Throughout the fall and winter of 1968, Andrews led a series of forums throughout New York City allowing black artists to voice their concerns about the perceptions of black culture as something exotic and mysterious, anything but complimentary.

In his essay “The Artist as Social Being,” Andrews writes:

Anyone can learn how to draw, paint, sculpt, write stories [and] sing songs. That’s a learned thing; you can be taught that, but the problem of being able to go above that and develop something artistic is what is required. That requires thinking and exposure to events and people that inspire you and enable you to transfer those feelings through your head into the medium you’re working in. The big problem people in fine arts have, all of them, not just painters and sculptors, but all of them, is to somehow to keep contact [with the world] and to find the areas that you can draw upon. 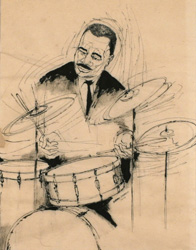 LIKE A PURPLE HAZE ACROSS THE LAND: THE ART OF BENNY ANDREWS showcases 20 drawings Andrews produced between 1959 and 2005. These works demonstrate that throughout his career he never got away from his Southern roots and those experiences which inspired his work and served to maintain his connection to the “folk.” What is more, his ability to draw upon the people, events, and places at the core of his inner being helped him produce art filled with substance and meaning. At the time of his death in 2006, Andrews had fully evolved as a voice of the people, and in the process gained the respect and admiration of artists, art critics, and the many marginalized communities throughout the United States seeking representation.

A symposium on Andrews’ life and work will be held Wednesday, April 18, at 7 p.m. in the Jones Room, Level 3 of the Woodruff Library. A presentation by Nene Humphrey, Andrews’ wife of more than 20 years, titled “Artist to Artist: Reflections on a Life Together,” will be followed by a discussion of Andrews’ art by Pellom McDaniels III, Associate Curator of African American Collections and curator of the exhibit. The program will begin and end with refreshments and an opportunity to view the exhibition. The symposium is co-sponsored by the Department of African American Studies, the Department of Art History, and the Graduate Institute of the Liberal Arts.