The scrapbook will be repaired and digitized as part of the recently awarded three-year $170,000 matching Save America's Treasures grant.  The grant will enable enhanced access to this scrapbook and nearly thirty other scrapbooks documenting African American artists, writers, students, vaudeville performers, preachers and former slaves. 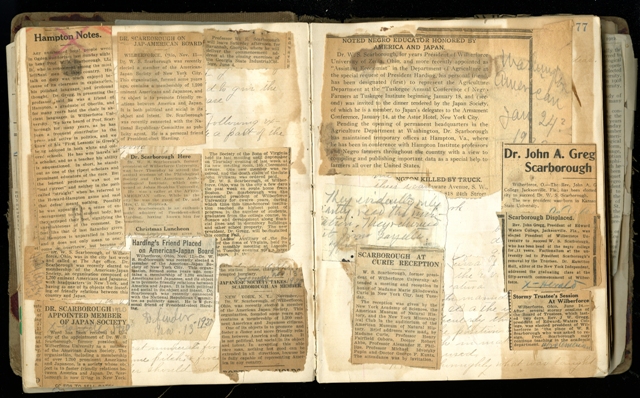 Above: A page from the scrapbook of William Sanders Scarborough.

Scarborough, born in slavery in Macon, Georgia on February 16, 1852, became one of the best known African American intellectuals of his era. The contents of the scrapbook document his life as a staunch proponent of the Republican party, as an educator/activist committed to the classically based liberal arts curriculum and as a scholar of Greek and Latin who belonged to many societies both black and white such as the American Negro Academy, the Modern Language Association, the American Philological Association and the NAACP.

Karen Jefferson, archivist at the Atlanta University Center, deems the materials valuable for the entire metropolitan area. As a student Scarborough spent hours with fellow students tearing down fortifications left from the Civil War with his own hands. Later in 1908, the year he became president of Wilberforce University, he received an honorary doctorate from Morris Brown College and at the same time gave the commencement address at Atlanta University for President Edward Twichell Ware. Ware was the son of Atlanta University's first president Edmund Asa Ware under whom Scarborough studied. This important collection will help us understand the man that Kevin Boyle (author of Arc of Justice, National Book Award Winner in 2004) said was the exemplar of W.E.B. Du Bois' concept of the Talented Tenth. Henry Louis Gates, Jr. declared in the forward he wrote for The Works of William Sanders Scarborough: Black Classicist and Race Leader (Oxford University Press, 2006) that: “Scarborough was the consummate black academic.” And he added this postulate: “If W. E. B. Du Bois, the antecedent of today's black public intellectuals, himself has an antecedent, it is W. S. Scarborough, the black scholar's scholar.”

Find out how to view the Scarborough scrapbook by visiting the MARBL website.  Click here for more information about the scrapbook.