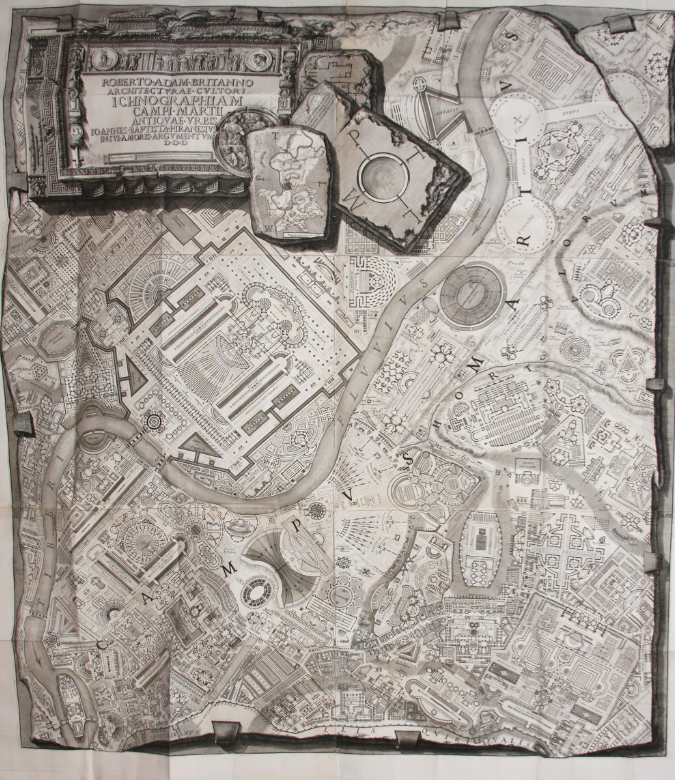 Emory’s MARBL has been collecting items for our ‘Views of Rome’ collection for over a decade, and we are pleased to announce the latest acquisition:

Giovanni Piranesi (1720-1778) was an Italian etcher, engraver, designer, architect, archaeologist and theorist.  Emory’s copy is a first edition of Piranesi’s reconstruction of the Campus Martius, an important urban environment outside the walls of Rome. He based the work on

The reconstruction of the Campus Martius was, at the time, a subject of fierce controversy among Roman antiquarians.  And of course, in the Greco-Roman argument, Piranesi was always a fervent protagonist of Rome!

The contents of the work are well described by Martha Pollack in her entry for the Millard collection [Pollack, M, Washington, D.C.:1993, p. 312).

“The publication borrows from the two main interests of the author, the archaeological research and the polemical battles of the early 1760’s. His historical inquiry is here committed to supporting his view of the primacy of Roman builders.  [The] plan is one of Piranesi’s most feverish fantasies, marshaling a huge range of imaginary constructs for the celebration of ancient Rome. Within this plan he proposes an urban and architectural landscape of the utmost complexity. Piranesi achieves this tour de force through a great variety of illustrations and employs every means of representation at his disposal.”

A highlight of this work is one of Piranesi’s most ambitious cartographic efforts: a 6 sheet reconstruction of the Campus Martius measuring some 1.35 x 1.17 meters when assembled, and showing the influence of the 1748 Nolli plan on which Piranesi had collaborated.

The present copy is extra-illustrated with a rare entirely engraved broadsheet catalogue of Piranesi’s works up to the time of publication. Andrew Robison of the National Gallery has identified no less than 31 states from copies, of which the present is number 5, matching exactly a copy at the Art Institute of Chicago.

In addition, Piranesi dedicated this work to the Scottish architect Robert Adam (1754-98), who had been closely involved in its preparation during the later 1750s. Adam’s name features prominently on the title page where Piranesi also proudly flaunts his own membership of the Royal Society of London.  A medallion on the right of the large folding plate shows the two friends in profile.

For those interested in other items from Emory’s Views of Rome collection, please see the digital scholarship DiSC project based on Ligorio map of Ancient Rome.

MARBL thanks Emory's Michael C. Carlos Museum for their contribution to help acquire this important new addition to the Views of Rome collection.  Images courtesy of Seth Fagen from Martayan Lan Antique Maps and Rare Books.