Carmel Carrington Marr, former legal advisor to the United States Mission to the United Nations (UN), attorney, community activist, and energy consultant. Marr worked extensively in public service through her membership on many boards and committees including the Brooklyn Society for the Prevention of Cruelty to Children, the Billie Holiday Theatre for the Performing Arts, New York State School for Girls at Hudson, New York, and various boards and committees related to energy, as well as political, professional, and women’s organizations. 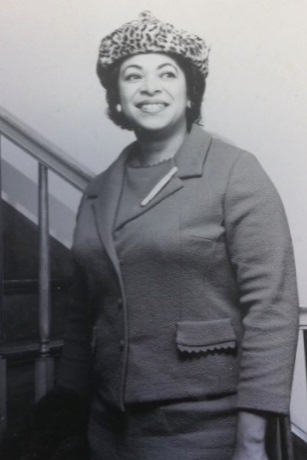 Marr was born June 23, 1921 in Brooklyn, New York, the daughter of Barbadian-born parents William Preston Carrington and Gertrude Lewis Carrington. She graduate cum laude from Hunter College with a Bachelors of Arts in 1945 and continued her education in law at the Columbia University Law School, graduating with honors in 1948. She passed the New York State Bar in 1948 and worked as a law assistant at the firm Dyer & Stevens, Esquires (1948-1949). Following her term at Dyers & Stevens she started her own private law practice (1949-1953) until she was appointed by Ambassador Henry Cabot Lodge, as advisor on legal affairs to the United States Mission to the United Nations (1953-1967).

Marr was very active in her work at the United Nations with the addition of service on numerous committees including the Security Council, the Human Rights Commission, and the political, administrative, budgetary, and legal committees of the General Assembly. She was also an advisor on the Palestine Conciliation Commission and the Korean Cemetery Advisory Committee. She also provided drafting and delivery of statements on behalf of the U.S. in UN meetings; was a liaison with other delegations to the UN and with the Secretariat, as well as with various federal, state, and city agencies. She also frequently lectured on diplomatic privileges, immunities, and aspects of international law.

Marr was the first woman and first African American to be appointed as a Commissioner for the New York State Public Service Commission (1971-1986). Beyond her administrative duties for the commission to regulate utility services, Marr also served on numerous committees and research organizations related to energy, such as the Gas Research Institute Advisory Council, the National Association of Regulatory Utilities Commissioners, and the Transportation Technical Pipeline Safety Standards Committee.

A strong community activist and volunteer in her home borough of Brooklyn, New York Marr served on many local boards and committees for the arts and children and welfare services. She was the founding chair and president of the Billie Holliday Theatre of the Performing Arts, a board member for the Brooklyn Society for the Prevention of Cruelty to Children, the Industrial Home for the Blind, and the New York School for Girls in Hudson, New York. She had a particular interest in the Caribbean Scholarship Fund, which financed high school and college education in the United States for students from the West Indies. Additionally, she was extremely active in political, professional, and women’s organizations, such as the City Wide Republican Women’s Club, the Harlem Lawyer’s Association, the International Federation of Women Lawyers, the National Republican Committee, and Women for Achievement.

The Marr-McGee Family Papers were processed as part of the Amistad Research Center’s Hidden Collections project. The papers largely document the lives and careers of Warren Marr, II, his wife Carmel, his sister Grace Marr Nugent, and related families.