Do you know any racists?  After having worked on MARBL's Neighbors Network collection, I feel as though I know hundreds, maybe thousands of them. The Neighbors Network records offer a chance to get to know the thoughts and personalities of virulent racists as well as the people who sought to monitor and ultimately thwart hate group activity in the 1980s and 1990s. 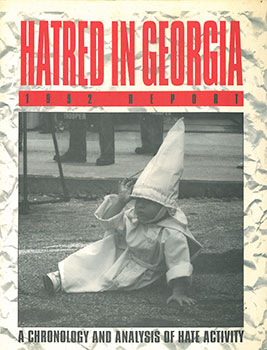 The Neighbors Network was founded in the late 1980s with the goal of countering “hate-crime and hate-group activity through research, education, victims' assistance and community action.” The Network worked closely with other anti-hate groups in Georgia. They compiled an impressive cache of material relating to various Ku Klux Klan, Neo-Nazi, and Skinhead groups while also proliferating numerous original publications urging public action and rejection of hate group activity. The group also emphasized engagement with those wishing to escape racist groups despite those groups' highly dangerous and effective retention efforts. The Network never lacked a steady supply of material to report to the community. The counties surrounding and including Atlanta were hotbeds of racist activity in the time during which the Network was active. 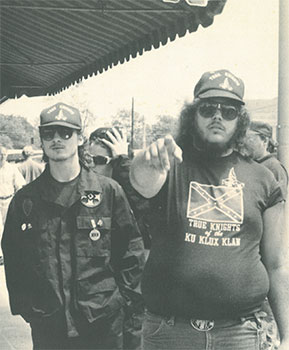 Members of the KKK

My experience in arranging the Neighbors Network collection was nothing if not educational.  Before, I had never thought of white supremacists as three-dimensional people.  Racists did not have histories, life experiences, or formative moments.  They simply existed, fully formed and fully racist for no rational reason.  The Neighbors Network knew that a bigot had his/her reasons for being and thinking the way s/he did, and diligently uncovered the ideologies and (nearly always) erroneous beliefs that fueled hate groups' vitriolic rhetoric and actions.  The Network publicized hate group activities and spurious ideologies.  In so doing, it de-mystified the Racist in the public perception and made people aware of the danger hate groups pose to free societies.  The Network also made every effort to appeal to the humanity of white supremacists as it tried to rehabilitate group members.  The collection tells this threefold story of infiltration, publication, and rehabilitation. 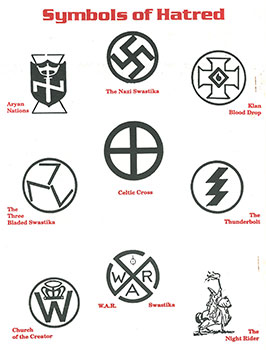 Viewing this collection affords one the opportunity to see what ordinary people are capable of when primed with ideology.  In viewing the pictures, in reading the literature, and in analyzing the signs and symbols of these groups, one begins to feel as though they really know the people in the pictures and behind the words, for better or worse.