It happens sometimes that MARBL has multiple patrons visiting and using our reading room at the same time who are working on similar themes or researching the same collections. In those cases, we like to let the patrons know so they can possibly discuss their work and gain further insights into their research. On October 22, 2012, we were delighted to have Janice Rothschild Blumberg visit us. Her late husband was Rabbi Jacob M. Rothschild whose papers reside at MARBL.

On this same day, it happened that an out-of-town researcher, Eva Dean, arrived to work with the Rothschild papers for her final degree project. MARBL’s Research Services Associate Archivist, Kathy Shoemaker, realized what a tremendous opportunity this could be and was able to bring Mrs. Blumberg and Ms. Dean together. The two spent a large portion of the afternoon discussing Atlanta’s history. It was such a rewarding experience for everyone involved, including the staff of MARBL, that we thought we’d share with you some reflective thoughts on the afternoon sent in by Janice Rothschild Blumberg and Eva Dean.

I just recently graduated on December 8, 2012 with my Bachelor’s in History. This is what brought me to Emory on October 22, 2012. I was doing research pertaining to my Senior Seminar Paper, which is the last paper of my college career. My topic was The Jews of Atlanta in the Civil Rights Era: 1954 – 1968. When I started researching my secondary sources, the name Rabbi Jacob Rothschild kept reappearing over and over. I decided to look into it and that is when I discovered that he was the rabbi of The Temple, the one which was bombed on October 12, 1958.

Already having knowledge of the Temple from a previous paper I had written, I decided that I should look into Rabbi Rothschild much more in-depth. I found out that his papers were at the Woodruff Library because I had recently checked out Janice Rothschild Blumberg’s book One Voice: Rabbi Jacob M. Rothschild and the Troubled South. So, I decided that October 22 would be the day.

Upon my arrival to the library, the staff was wonderful. They were very helpful to me on the whole process of what to do and what not to do. Shortly after I arrived I noticed two women come in and sit at a table behind me. A few moments later I received a phone call and stepped away to the designated area for talking on your cell phone. When I was done with my phone call one of the librarians asked me if I would be interested in talking to the women who donated Rabbi Rothschild’s papers to the library. Immediately in my head I knew exactly who she was talking about and I thought to myself, really, there is no way. The funny thing is that all the way to Atlanta I was praying that I would find someone to help me with my thesis.

Mrs. Janice and I talked about kismet or fate as you call it that this was supposed to happen. Mrs. Janice and I talked for three hours and I will never forget it as long as I live. It was, by far, the most humbling and exciting experience I have ever had. Mrs. Janice was so willing to talk to me and answer questions and just share her story. I am truly in awe of this amazing woman, and the conversation we had will live in my memory banks forever. For me, I was and still am, in awe of the notion that I literally met someone who is an imporant part of Georgia’s history during a time when the South was not always the safest place, and she knew two people who have amazing stories themselves, Martin Luther King, Jr. and Lucille Frank. I cherished every moment we spent talking and I look forward to meeting her again. 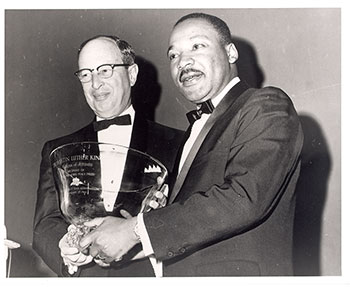 There’s no greater thrill than learning that you’ve made a difference in the life of a stranger. Even more exciting for me was the context in which I happened to be at MARBL on the afternoon that  Eva was working there. Above all, I rejoice in the knowledge that the life and work of my late husband, Rabbi Jacob M. Rothschild, continues to inspire enthusiastic, idealistic young scholars like Eva Dean.

To begin with, the Rothschild papers reside at Emory, rather than at an institution with which the rabbi was more closely associated, because when he died, over 30 years ago, our children and I believed that they would be used more there than they would be anywhere else. That assumption appears to have been correct.

At the ceremony when MARBL received the collection, I said—only partly in jest—that we chose Emory because, if there is actually such a thing as an after-life, we wanted Rabbi Rothschild to be with his friends. The collections of two very close friends, Hal Davison and Ralph McGill, were already there. A more recent addition was that of another close friend, Morris Abram, the attorney who defeated the county unit system in Georgia and enabled our Atlanta votes to be fully counted, initiating here the reality of one man, one vote. His niece, Cecily Abram, who lives in Washington, DC, wanted to see his papers, and as she was visiting me in Atlanta, I brought her to MARBL. That’s how I happened to be there on the afternoon that Eva was researching the Rothschild papers.

Serendipity? Call it what you want, it bore out for me in a very meaningful way the idea of placing a loved one’s visible remains in proximity to those of his friends. And the emotion of the moment—Eva’s and that which her reaction aroused in me—can only be described as the thrill of a lifetime.

It happens sometimes that MARBL has multiple patrons visiting and using our reading room at the same time who are working on similar themes or researching the same collections.