The Manuscript, Archives, and Rare Book Library is pleased to announce that additions to Paul Muldoon’s papers have been fully processed and are open again to research. With correspondence and writings extended up to 2005, and personal files as recent as 2010, researchers now have greater access to the material record of one of Northern Ireland's most acclaimed poets. 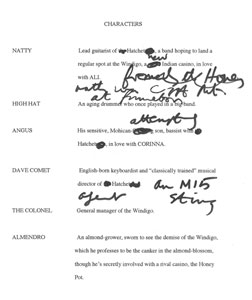 The time period covered by these additions was one of transformation. Muldoon began writing works considered the most mature and expressive of his career, with 2001's Moy Sand and Gravel earning him the Pulitzer Prize for Poetry. Along with earning the Pulitzer and a spate of other awards, Muldoon was the Oxford Professor of Poetry between 1999 and 2004, delivering lectures on poetry that can be found in the Writings series in typescript form, as well as taking an increasingly public role by publishing and lecturing in various popular formats.

This public engagement is nowhere more pronounced, however, than in Muldoon's collaborations with other artists; his collaborations with composer Daron Hagen culminated in the opera, Vera of Las Vegas, acclaimed for the pairing of Muldoon's verbal play and Hagen's eclectic, cabaret-styled arrangements. Their working methods can be seen in the Writings series, in which they exchanged material over email. Likewise, Muldoon's unproduced musical, The Honey War (also to be found in the Writings series of Muldoon’s papers) was written in collaboration with singer-songwriter Warren Zevon, reflecting Muldoon's interest in taking poetry beyond the printed page and satisfying a lifelong desire “to be a rocker.”

As with Muldoon’s collaboration with Hagen, the poet’s additional collaboration on individual song lyrics with Warren Zevon took place over email, folding their dialogue over day-to-day concerns. Muldoon’s hectic schedule and Zevon’s romantic entanglements and frustration with the recording process enter the dialogue of their working relationship, shedding personal light on the creative process. To preserve that relationship, the songs they wrote together (appearing on Zevon’s album, My Ride’s Here) have been kept in the Warren Zevon correspondence file. The connection between the personal and the creative is no more evident than in the final months of their correspondence, as the singer-songwriter’s terminal mesothelioma drew his life to a premature close.