Emory Libraries recently acquired the Kōṭikalapūḍi Vīrarāghavakavi (1663-1712) manuscript. The online edition of this book is in the public domain, not protected by copyright, and has been made available by Emory University. The text is a work of poetry based on the Udyoga Parva of a Telugu Mahabharata by Kotikalapudi Viraraghavakavi (1663-1712). The Mahabharata is one of two major epics from India. It is notable as an original composition in Sanskrit and its subsequent re-imaginings in India’s vernacular languages, including Telugu. The manuscript captures the poetry of a lesser known poet, rather than the work of the Kavitraya, the famous trinity of Telugu poets (Nannaya, Tikkana, Errapragada) who are the authors of the canonical Andhra Mahabharatamu.

The Telugu Manuscript was by far one of the most unusual items photographed by the Digitization & Digital Curation Department at Emory Libraries. The manuscript is comprised of a series of bound, dried, palm leaves each inscribed with text that was etched into the surface of the leaves. Given its fragility and structure, photographing this manuscript became a balancing act. First, we needed to make sure that each page was legible for later transcription. Each leaf contains tiny etched characters that a reader would typically rub with a black or dark colored powder to make the text easier to read. In this manuscript, no such powder had been used, making the inscriptions difficult to see under direct studio lighting. We decided that using shadows would be the most effective way to reveal the text details, and we adjusted our capture studio lighting equipment, accordingly. Example below: 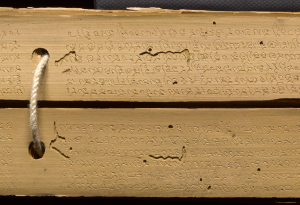 Page spread of the Telugu Manuscript

Keeping each page spread at an even distance from the lens was necessary to guarantee maximum focal quality. This required a makeshift book stand using cardboard shims and weights which were readjusted after every spread was photographed. Emory Libraries Assistant Conservator, Kirsten Wehner, assisted during the entire process due to the complex handling required by the fragile manuscript. The digitized images produced may be viewed here: https://readux.ecds.emory.edu/books/readux:tgsjc/pdf/ 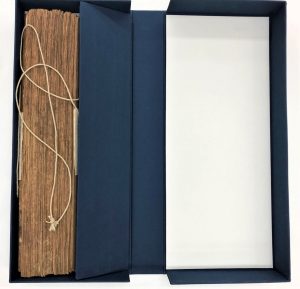 Box with wedge in place for secure storage 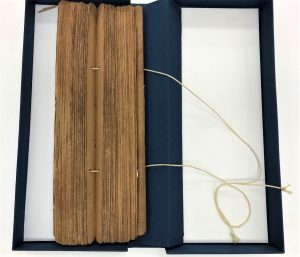 After digitization, the manuscript was sent to the Emory Conservation Lab to receive a custom-fit protective enclosure. In consultation with the archivist at the Pitts Theology Library, we decided to construct a box with a built-in wedge. This wedge allows researchers and classes to observe the interior of the manuscript without needing to remove it from the box. The wedge is attached to the tray of the box in which the manuscript is housed, holding it securely in place when the box is closed. When the box is opened, the wedge can be flipped down to support the manuscript during use.

The Telegu manuscript is currently being catalogued by the Pitts Theology Library and will be translated for use in teaching, including two upcoming Emory Middle Eastern & South Asian studies courses.