In 1996, Al Pacino released Looking for Richard, a film chronicling the actor’s long-term fascination with Shakespeare’s Richard III.  At that time, the title was largely metaphorical.  Pacino and his fellow actors were “looking for” the dramatic figure, trying to make sense of his complicated representation in Shakespeare’s renowned play. Less than a decade later, however, the remains of the historic Richard were famously “found” beneath a parking lot in Leicester, U.K.  On February 4, 2014, the University of Leicester announced that DNA analysis confirmed the identity of the bones discovered in August, 2012 (CNN report).  The next day, the Folger Shakespeare Library in Washington, D.C., with the support of the British Council, hosted “FINDING RICHARD,” a talk by geneticist Dr. Turi King and archeologist Dr. Matthew Morris, both of the Greyfriars Project that located and identified Richard III’s bones.

Flying entire Emory Shakespeare classes to Washington was impossibly expensive, of course.  Since Emory’s World Shakespeare Project (www.worldshakespeareproject.org) thrives on videoconferencing, however, bringing the Folger to Emory was entirely possible, especially with the help of both Eric Johnson, Director of Digital Access at the Folger and Jason Brewer from Emory’s Office of Classroom Technologies.  Two sections of “Shakespeare, Text, and Performance” were therefore able to enrich their study of Richard III with late-breaking news of this exciting historical discovery.

King and Morris are both engaging speakers, who provide an illuminating account of this unlikely occurrence.  The project was instigated by Philippa Langley, a member of the Richard III Society, a group dedicated to the study of this king, with a particular emphasis on questioning his representation in Shakespeare.  Resembling the improbable success of Sam Wanamaker’s quest to rebuild Shakespeare’s Globe Theatre in London, Langley’s determination provided the catalyst for this even more implausible outcome.  As Morris indicates, there was almost no historical evidence available that would identify the site of Richard’s burial. In fact, an historic plaque on Leicester’s Bow Bridge reports that the king’s body was tossed into the river and lost years after his death at Bosworth Field.  Langley remained convinced that such accounts were incorrect and was able to spearhead sufficient academic interest and financial support to enable the excavation at the site of the Greyfriars’ medieval Franciscan friary, where Richard’s body was originally interred.  Money was limited, however, and only a small portion of the Friary grounds was accessible for archeological investigation.  The team determined that they had the resources to disinter and examine no more than 4 bodies.  They had no certainty that their site contained the portion of the friary where Richard’s body was said to have been buried. After the Dissolution of the Monasteries in 1538, the buildings were gutted, then eventually destroyed, so that little indication remained of where key areas originally existed.

Remarkably, a bone found the first day of the dig proved eventually to be part of the body they sought.  The burial site, moreover, offered a remarkable story.  Although Henry Tudor eventually funded an alabaster tomb for his predecessor’s grave, the original space dug was too short for Richard’s body.  Accordingly, the skeletal remains, which were not placed in a coffin, were jammed into a area that demanded the body be compressed in order to fit.  This burial gave every indication of having been one offered “minimal reverence.”  The skeleton had lost its feet (probably during Victorian construction in the area), but the rest of the body remained intact, including the clear markings of scoliosis that first suggested this finding might be significant.  The skull showed significant head wounds, but was not destroyed.  The Greyfriars Team speculates that Richard’s scoliosis may have made a standard helmet difficult to wear, leaving him more vulnerable to head injuries.  They also believe that Richard’s face was left intact in order to provide sufficient proof that the king had actually been killed. The modern reconstructive work that this full skull facilitated resulted in a face closely resembling early portraits of Richard III.

Turi  King’s genetics work demanded equally remarkable savvy and coincidence.  Radiocarbon dating, osteoarcheology, and DNA testing were able to pinpoint the probable sites and circumstances of the skeleton’s birth, life, and death.  King indicates, for example, that studies show this person’s diet was particularly rich in marine life and wine for the final two years of his life: a period consistent with Richard’s reign as king.  Modern analysis can also locate the skeleton’s origins in the area of Richard’s birth.  Finally, significant archival and genealogical work resulted in the identification of two Ricardian descendents.  As announced on February 4, 2014, this mitocrondrial DNA analysis confirms Richard’s identify (Guardian story).  The University of Leicester offers an impressive website that details this entire process in considerable detail (https://www.le.ac.uk/richardiii/).  They will be offering a two day conference at the end of February to present their findings in detail.  In the meantime, Folger Shakespeare Library Director Michael Witmore’s sponsorship of this event made it possible for Emory students to be among the first to receive the news of this significant historical finding.  Videoconferencing meant that students could benefit from this presentation, even if they could not be physically present in the packed audience on Capitol Hill. 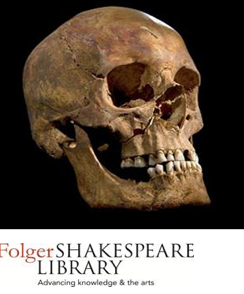