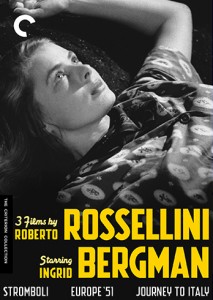 At the time, Ingrid Bergman was a popular and respected film star, and Roberto Rossellini likewise earned international acclaim for films such as Rome: Open City (1945) and Paisà (1946), which are commonly associated with the movement of Italian Neorealism. In 1948 Bergman wrote a letter to Rossellini expressing her admiration for his films and her desire to work with him, and the two began a lengthy artistic and romantic partnership. The affair scandalized the international community, but the films themselves proved groundbreaking works in European art cinema.

Stromboli has a fairly simple story–a wartime refugee feels stranded when she marries a simple fisherman who takes her to the volcanic island of Stromboli–but it is enlivened with semi-documentary footage of life on the island, including a powerful scene of tuna fishing. Europe ’51 is about a woman who is devastated by the death of her son and transforms into a modern-day saint, devoting her life to looking after the poor and sick. Modern society is not so tolerant of saints, she learns the hard way. Journey to Italy is about an American couple (played magnificently by George Sanders and Ingrid Bergman) whose simmering marital problems come to a head when they make a trip to Italy to sell property belonging to a late relative. All three films feature remarkable performances by Bergman, but they are also compelling as attempts by Rossellini to grapple with the spiritual and psychological landscape of postwar Europe. Journey to Italy in particular was innovative for its use of setting to express character and for its calculated deployment of boredom and “non-dramatic” scenes, though the film itself is very far from boring. Not well known in the U.S., it was much admired by the French New Wave and hugely influential on Michelangelo Antonioni. It would not be much of a stretch to argue that Antonioni could not have made L’Avventura (1960) or La Notte (1961) without absorbing the lessons of Journey to Italy.

The story behind all three films is exceptionally complex, not only because Rossellini himself was a complex figure, but also because the films exist in multiple versions, reflecting the vagaries of international film distribution in the 1950s. The box set offers both English and Italian versions of Stromboli and Europe ’51; personally, I watched the English-language versions since that is the language which Ingrid Bergman performed in, though the Italian versions are legitimate in their own right and have some footage not included in the English versions. The set also includes a gorgeous new restoration of the English-language version of Journey to Italy and contains generous supplements that amply contextualize all three films. Unfortunately, the set does not include two other Rossellini/Bergman collaborations, Fear (1954) and Joan of Arc at the Stake (1954), but it is difficult to complain because these three films arguably represent the peak of their collaboration.

In the Music and Media Library: