Earlier this year former Newton Graduate Fellow Alyssa Stalsberg Canelli drew our attention to the surprising contents of Box 22 in the Thomas Ellis and Etha Mills Reeve papers: namely, a set of animal tusks, teeth, claws, and skin. Since Alyssa’s original blog post highlighting these unusual items, the several species of animal represented by the parts have yet to be identified: as she noted, the expertise of MARBL’s archivists, librarians, and historians does not extend to animal biology. As a literary scholar, I likewise find myself out of my depth when confronted by these animal parts. Not only am I unable to identify the species of Box 22, but also I find it challenging to understand the interspecies story the animal parts seem to tell. Although MARBL contains many oddities in addition to its traditional archival holdings like print material and rare books, these animal parts are especially strange because they imply that history, even the history preserved in archives, is never exclusively human. 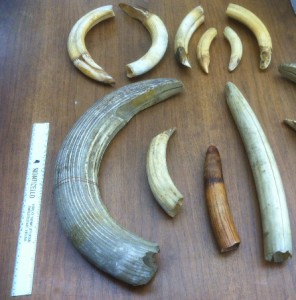 Some of the tusks in the Thomas Ellis Reeve collection

Preserved alongside the letters, diaries, records, photographs, sermons and other writings in the Reeve collection, the animal parts in MARBL in part reflect Thomas Ellis Reeve’s work in the Belgian Congo. As a missionary for the Methodist Episcopal Church, Reeve’s work with the native Congolese people—specifically the Otetela Tribe—also put him into close contact with African wildlife. In one of his accounts of life in the Congo, Reeve explains how leopards often visited the village in which he lived to make off with the goats he and his companions had brought for their own consumption. For Reeve, a man raised in Georgia and who returned to the state after his work in the missionary field, the animal parts in his collection were likely unique souvenirs of his years spent in a far-away place close to wild animals: they captured the diversity of biological life in Africa and by extension a sense of African wildness itself. 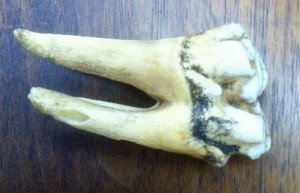 One of the large animal teeth contained in Box 22

As with many animal remains claimed as souvenirs, however, the tusks, teeth, skins, and claws in Reeve’s collection also commemorate a very particular kind of human action: the killing of animals. In Reeve’s account of a leopard’s visit to the village, he also details his construction of a leopard trap which he baits with a live goat. After trapping the leopard, Reeve explains, he shoots the animal several times as it tries to escape. Once the leopard dies, Reeve tells of how he cut off the leopard’s paws for his trophy collection (“A Mid-Night Leopard Alarm”). Could it be that the paper bag full of claws in MARBL once belonged to the leopard whose death Reeve narrates? And are the other animal parts in Reeve’s collection from animals he killed? Even though we cannot answer these questions definitively, the animal remains in MARBL may have been included in Reeve’s collection to imply his ingenuity and ability to survive despite the dangers inherent in the natural world. 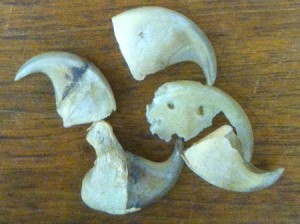 For me, however, these animal parts commemorate much more than the overseas travels and accomplishments of one man. Instead, I see the range of nonhuman lives represented through these remains as demanding attention to a set of stories told by other-than-human narrators. The very fact that we have yet to identify the species represented by these animal parts testifies to the ways animals resist human ways of organizing information and producing knowledge. Even though they seem to be appropriated by human history—a history told through Reeve’s accounts and by inclusion in his archival collection—these animal parts actually resist such appropriation by remaining strange, out-of-place, and ambiguous. The lives and deaths of the animals who once bore these tusks and ate with these teeth represent life stories lost to us. Even though it may not be articulated in a language we understand, these tusks have a history, and these skins tell a story: further, it will take the curiosity and investigative work of students, researchers, and other visitors to MARBL to help realize those stories. By virtue of their preservation in MARBL, these animal remains may find a second life in the archive.

Blog Post: The Extraordinary World of MARBL: Tusks and Teeth