Niall Atkinson (University of Chicago) will deliver the third lecture of the MAP IT | Little Dots, Big Ideas series on Monday, 15 February, at 5.30 PM in the White Hall 111.  (**please note this new location**) He will discuss Seeing Sound: Mapping Florentine Soundscapes, a DH project that focuses on Renaissance Florence, taking inspiration from Dante’s expression of the relationship between the sound of a bell, the evocation of a social topography, and the maintenance of a collective memory embedded with the architectural present.

In Canto VIII of the Purgatorio, Dante describes a moment in which all Christians of his age were united by a sound that mourned the passing of another day. 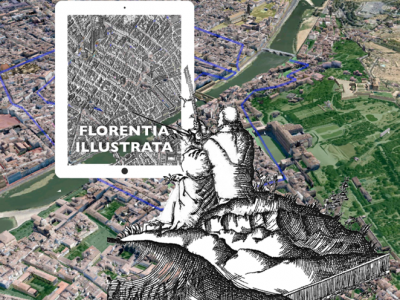 But this ring from afar, this “squilla da lontano,” could also pierce the heart of travelers with a certain tenderness, uniting them in a common bond with the inhabitants of a far off city.  What Dante heard was the evening bell, part of a complex system of acoustic exchanges produced by bells and towers that demarcated both the temporal and the spatial jurisdictions of the pre-modern European city.  A city’s soundscape was as much an expression of its identity as it was a medium through which social relations were forged and negotiated through both ritual and transgressive practices.  And since the sound of an evening bell determined the limits of a city’s legal control of a territory and its symbolic presence within the psychological geography of its inhabitants, mapping such networks of sound can shed a great deal of light upon the mutual effects produced by buildings and bodies on each other.

The MAP IT | Little Dots, Big Ideas includes seven workshops for people at Emory. For more information about the workshops and the workshop registration form, see: https://scholarblogs.emory.edu/dmh/workshops/.

MAP IT Workshops (Emory community only)