Nestled along the western bank of the Chattahoochee River, bordering the state of Georgia, sits the small town of Phenix City, Alabama. Here in this valley, during the mid-20th century, Phenix City’s local officials allowed a criminal network of drugs, gambling, gruesome murders, sex trafficking, and illegal adoptions to flourish. In 1954, prompted by the murder of the state’s newly elected attorney general, Albert Patterson, the corrupt regime in power was removed by military force. Soon after, the town and its people embraced the newly awarded title of “All-American City.” And no one talks about Phenix City’s history anymore. And if they do, it’s done with clenched teeth while looking over their shoulder.

Phenix City was known as the “Wickedest City in America,” and the “Sin City of the South.” I’ve always known it as my weird and sordid hometown. Growing up there I heard stories about the crime ring known as “The Machine” throwing bodies in the Chattahoochee River and about the brothels being the place to go to buy babies. I heard that there was a network of tunnels under the river and under the casinos that criminals used to transport everything from whiskey to guns to body parts. I heard stories like this so often that I became somewhat desensitized to the violence that had occured in Phenix City before I was born. It was like a pulpy, tawdry fiction that happened in another era and the oral histories passed down to me were like fables or, more specifically, they were like parables about the terrible things that can happen when “good” people sit back and do nothing. There were life lessons in the stories, but they felt like that – stories. 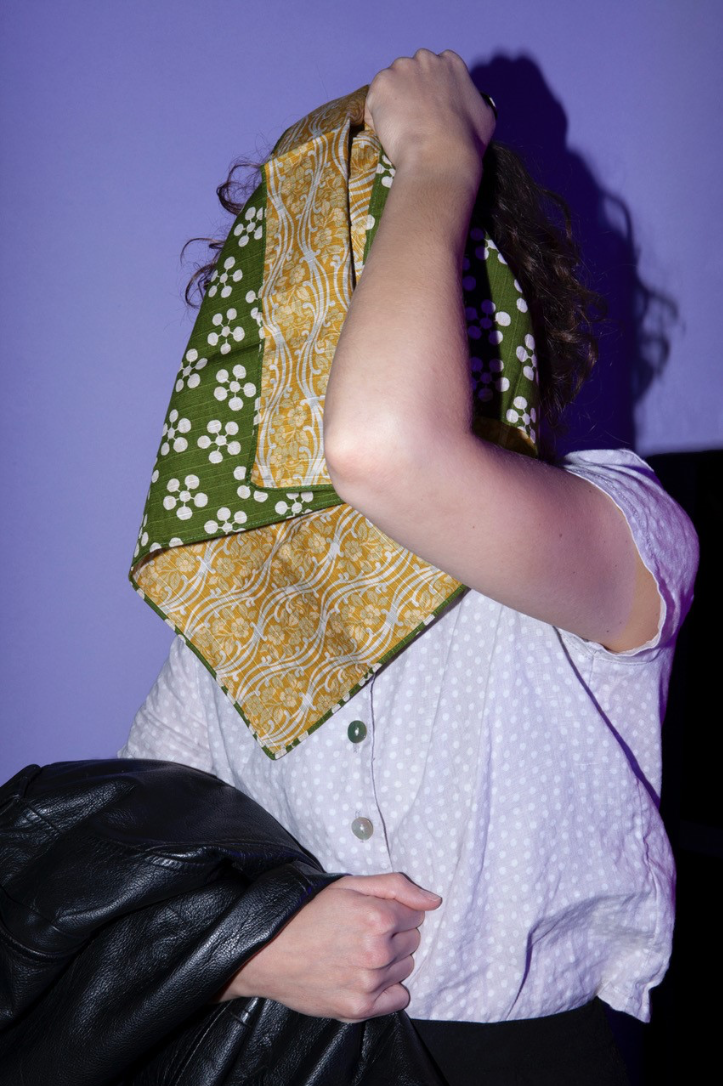 Reenactment photograph by Adam Forrester. Based on archival imagery found in the collection of Margaret Anne Barnes.

Once I realized that Margaret Anne Barnes, who wrote The Tragedy and the Triumph of Phenix City, Alabama (Mercer University Press, 1998), had taught at Emory and had placed her research materials in the care of the Stuart A. Rose Manuscript, Archives, and Rare Book Library at Emory University, I knew I had to go take a look. What I found took my breath away.

All those fables snapped into focus for me. The mumbled myths and hushed murmurings of my past became fact, rendered in black and white text, labeled “TOP SECRET.” I don’t know how Barnes obtained these records with such explicit details about the crimes of the major players during Sin City’s era of vice, but I knew that I had to share these vivid writings with more people.

Having grown up in a place that never fully reconciled with its own past, the documents I found in the archives filled in the gaps of my splintered narrative. Over the years I’d cobbled together some version of Phenix City’s history that was situated between fact and fallacy, and I’d attached that story to my own identity. Finding these truths locked away in the archives was clarifying for me, and what I found is still currently reshaping my own understanding of who I am. 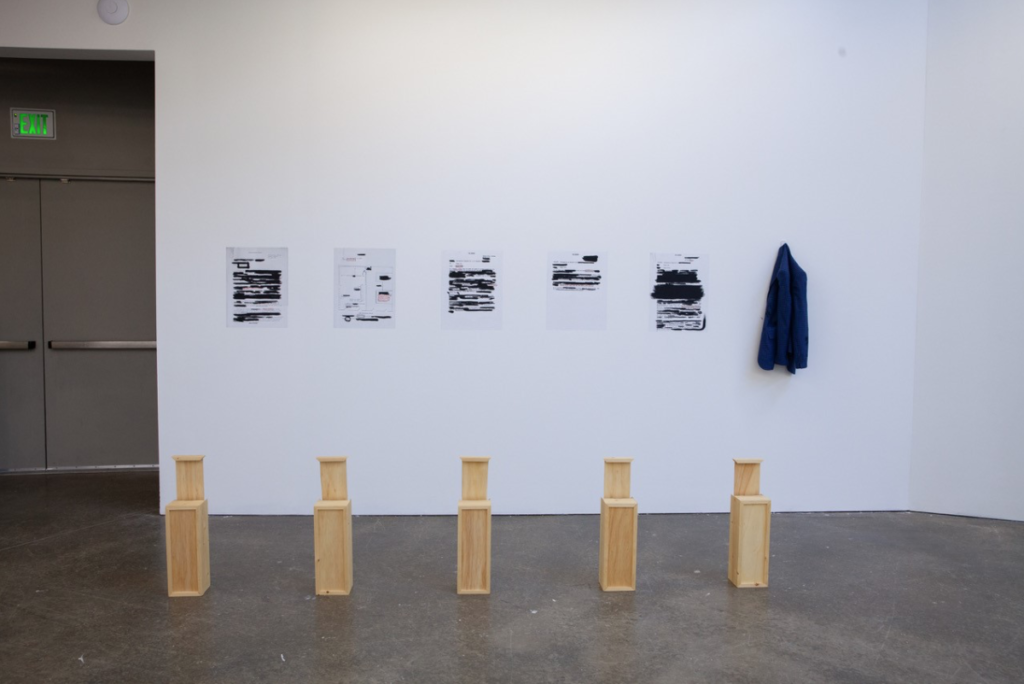 A year after finding Professor Barnes’ treasure trove in the archive, I was invited to participate in an exhibition at the Atlanta Contemporary Art Center entitled “Virtual Remains,” curated by TK Smith. My piece for the show was entitled “My Wicked City Compendium” and the work is an ephemeral sonnet of sorts, in which I attempt to resolve my own memories and myths born out of my experience of being a native son of the “Wickedest City in America,” by mingling the histories I’ve found inside the archives with my own artistic practice. After careful consideration, I decided to display the stories I found in the archive alongside some of my own photographs made in response to those stories. Over a series of performances, the texts were redacted until eventually the stories were painted over entirely and sealed inside a wooden box.

I was most interested in the relationship that this history has with secrecy. Its oral retelling has always been somewhat hushed, and some of the documents I came across in the archive seemed like they hadn’t seen the light of day in some time. Redacting the stories and placing them in sealed boxes was in response to the way the story has been dealt with in the past, but it was also inspired by the act of archiving itself. Can a history be archived to the point where it seems to be just as hidden as it was before it was archived?

With this particular story, I’ve been thinking a great deal about what it means to bring histories out of the vault of the archive and (in this case) what is gained with this metaphorical act of re-archiving these stories inside of those boxes. I never would have found those stories if they had not been archived, but how can these kinds of histories become more accessible? If you find yourself in the stories housed in the archives, are those stories yours, are they the institutions, or are they simply everyone’s stories? 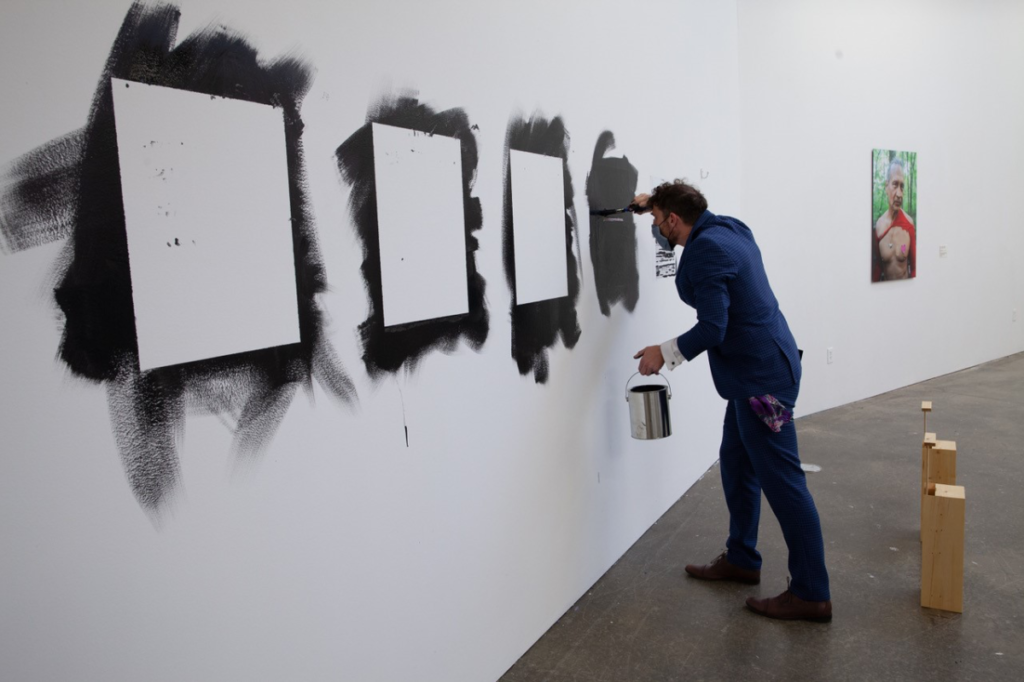 The author in performance, photo by Emily Wirt

For me, archived histories are for everyone. And with this project as well as future projects, I’m trying to facilitate ways (that may not always require white gloves) in which everyone can have access to our collective archived history, because that’s whose history it is, ours.

I’d like to send out a gargantuan thank you to everyone in the Rose Library for their continued support for this project, and for always being willing to pull yet another box out of storage for me to sift through.