Last month I was fortunate to attend the preconference of the Rare Books and Manuscripts Section  of the American Library Association where I attended a fascinating talk by Carolee Campbell, sole proprietor of Ninja Press, a fine press based in Sherman Oaks, California. The press has been in existence since 1984 producing hand-made books and broadsides. MARBL has a complete collection of books produced by the press and is in good company, as other institutions with complete collections include the British Library, the Library of Congress, Columbia University and Stanford University. 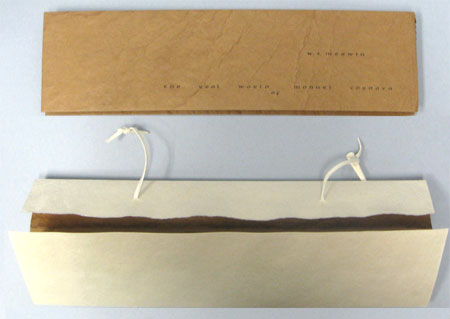 Outer and Inner Covers of The Real World of Manuel Cordova by W.S. Merwin, Ninja Press, 1995

Campbell's talk was about a specific book she produced in 1995 which reprinted a poem by W.S. Merwin called The Real World of Manuel Córdova and she described the process and decisions which led to the distinctive final appearance of the book.

Once the text of the book had been selected Campbell started her research by reading the book that inspired the writing of the poem. First published in 1971, Wizard of the Upper Amazon by Manuel Córdova-Ríos tells the story of the author's kidnapping at the age of 14 by Amahuaca Indians in the Amazonian jungle of Peru. His captivity lasted seven years during which time he was groomed to be a tribal chief. After reading this source book Campbell turned to Amazon photo books for color and visual references followed by books on the plant narcotics used by the Indians and books on tribal body painting. 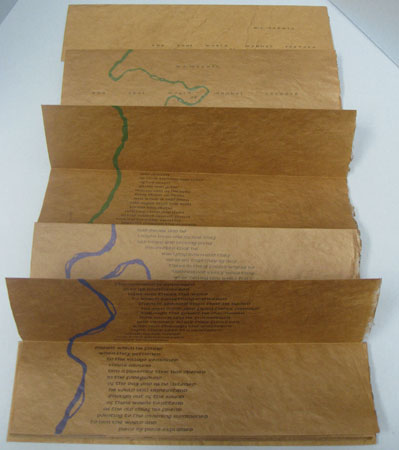 Inside Text of The Real World of Manuel Cordova by W.S. Merwin, Ninja Press, 1995

Campbell described her creative process as immersing herself in information and then winnowing it away to be left with the central artistic inspiration. In this case after absorbing her research she decided that the river Amazon would be the central theme for the book's format and illustration. With this decision made she searched river maps of the Amazon looking for a section that could be used as an illustration to accompany the text but could not find an ideal candidate. Instead she found the perfect match in a book on a river in the American West where she had travelled as a photographer years earlier. She was able to justify to herself the use of a U.S. river rather than the Amazon by the fact that the name “Amazon” is never actually stated in the poem.

With the illustration selected Campbell moved on to the format of the book. The paper she selected was brown kakishibu, a persimmon-washed and smoked handmade paper from the Fuji Paper Mills Cooperative in Tokushima, Japan. The paper's color and texture reminded her of river mud. The poem was printed on a long sheet of paper 15 feet long but is folded so that it can be read as a book with each of the poem's 43 stanzas on a single “page.” The illustration of the river runs beside the poem for its entire length with the text of the poem undulating like the flowing river.

Map from inside the Cover of The Real World of Manuel Cordova by W.S. Merwin, Ninja Press, 1995

Finally, Campbell selected the enclosure or binding to protect the work. For this she selected an enclosure shaped like the map case of an early explorer of South America with a 17th century map of the world on the cover.

The talk was fascinating as it revealed the amount of work that a book artist does before a word of the book has been printed. Also, Campbell raised the unanswered question of how the story of an artist's book's creation can be recorded so that future generations can admire not just the finished product but also the stories that inspired it.