During Asian American and Pacific Islander Heritage (AAPIH) Month in May, Emory Libraries will take a look at AAPI history in the US and our Libraries’ relevant resources. 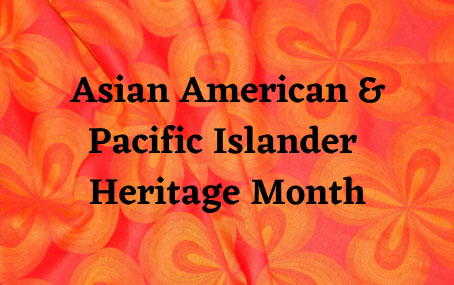 Despite a long history of immigrants from Asia contributing to the economy, culture, and history of the United States, the term “Asian American” is more recent than you might expect. Yuji Ichioka, a student at the University of California Berkeley, coined the term in 1968 to unite various immigrant groups of Asian origin under a common banner. Previously, such immigrants tended to consider themselves distinct groups according to the countries from which they immigrated, but Ichioka and others saw the potential for collaboration between people from Japan, the Philippines, Vietnam, and elsewhere on social and political issues.

Amid the turbulent 1960s, when movements for the rights of African Americans, gays, women, and other marginalized groups dominated the national discourse, the efforts of Asian Americans were often overshadowed. In the years since, scholars have used numerous sources to tell the story of what is now known as the Asian American movement.

Collective activism among Asian Americans first took place on college campuses in the 1960s, where organizers drew inspiration from the Black Power movement, often after having participated in it firsthand. Student groups like the Asian American Political Alliance (a name used by organizations on both the East and West coasts) demonstrated to raise awareness of poor living and economic conditions in Asian communities and to demand an end to the prejudice that kept those of Asian descent from fully participating in American society. Demonstrations directed at university faculty and administrators led to the establishment of early ethnic studies programs in higher education, and efforts outside of academia aimed to provide social services and encourage political action in local neighborhoods.

While local groups focused on local concerns, and divisions were born from the differing motivations of various ethnicities and political alignments, there were overarching issues that bridged divides between groups. One was the Vietnam War, which activists saw as both an example of imperialist American policy as well as an extension of anti-Asian racism beyond America’s borders. Another was the renewal of the US-Japan Security Treaty, which was criticized as a means for America to widen the reach of its military via troops and bases even as Japan’s use of force was prohibited by its constitution. In calling out a common impetus behind the discrimination they faced at home and America’s tactics overseas, Asian Americans forged solidarity not only between themselves—who, notably, were at risk of becoming directly involved due to conscription—but also with citizens of the nations where the US military operated.

One of the lasting impacts of Asian American activism in the 1960s-70s was the creation of a sense of identity through art and culture. Negative stereotypes about Asians perpetuated in the media were readily applied to Asian Americans, who debated internally the value of attempting to integrate with a society that excluded them. At the same time, their longstanding presence in America had estranged them from the cultures of their homelands. This dichotomy was the subject of theater productions, written publications, and works of visual art created by Asian Americans, who sought to take the construction of their identity into their own hands. Art was thus an essential part of the broader social justice aims of the movement, which observances such as Asian American and Pacific Islander Heritage Month continue to make known today.

To find resources about the Asian American movement at the Emory Libraries via discoverE, our online catalog, try performing an advanced search in the subject field for “Asian Americans” along with a more specific topical term, as below:

Related subjects that are more general, such as United States – Race relations or Student movements may be useful as well. Also note that the subjects that appear in search results are links to lists of other materials with the same subject. If you find a useful item in the catalog, be sure to click the subject links to find similar items.

The following are selected works in our collection through which you can learn more about the Asian American movement. 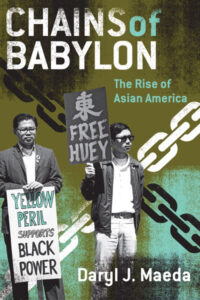 Chains of Babylon: The Rise of Asian America (2009), by Daryl J. Maeda — In “Chains of Babylon,” Daryl J. Maeda presents a cultural history of Asian American activism in the late 1960s and early 1970s, showing how the movement created the category of “Asian American” to join Asians of many ethnicities in racial solidarity. Drawing on the Black Power and antiwar movements, Asian American radicals argued that all Asians in the United States should resist assimilation and band together to oppose racism within the country and imperialism abroad. (From publisher) 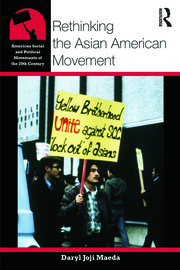 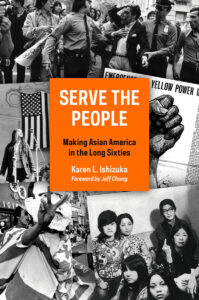 Serve the People: Making Asian America in the Long Sixties (2018), by Karen L. Ishizuka — Drawing on more than 120 interviews and illustrated with striking images from guerrilla movement publications, the book evokes the feeling of growing up alien in a society rendered in black and white, and recalls the intricate memories and meanings of the Asian American movement. “Serve the People” paints a panoramic landscape of a radical time, and is destined to become the definitive history of the making of Asian America. (From publisher) 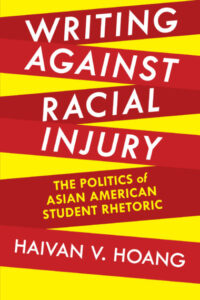 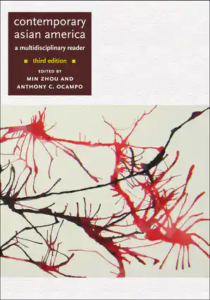 Contemporary Asian America: A Multidisciplinary Reader (2016), edited by Min Zhou and Anthony C. Ocampo — When “Contemporary Asian America” was first published in 2000, it exposed its readers to the formation and development of Asian American studies as an academic field of study, from its inception as part of the ethnic consciousness movement of the 1960s to the systematic inquiry into more contemporary theoretical and practical issues facing Asian America at the century’s end. It was the first volume to integrate a broad range of interdisciplinary research and approaches from a social science perspective to assess the effects of immigration, community development, and socialization on Asian American communities. This updated third edition discusses the impact of September 11 on Asian American identity and citizenship; the continued influence of globalization on past and present waves of immigration; and the intersection of race, gender, sexuality, and class on the experiences of Asian immigrants and their children. The volume also provides study questions and recommended supplementary readings and documentary films. This critical text offers a broad overview of Asian American studies and the current state of Asian America. (from publisher) 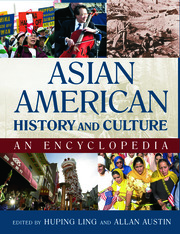 Asian American History and Culture: An Encyclopedia (2015), edited by Huping Ling and Allan Austin — With overview essays and more than 400 A-Z entries, this exhaustive encyclopedia documents the history of Asians in America from earliest contact to the present day. Organized topically by group, with an in-depth overview essay on each group, the encyclopedia examines the myriad ethnic groups and histories that make up the Asian American population in the United States. “Asian American History and Culture” covers the political, social, and cultural history of immigrants from East Asia, Southeast Asia, South Asia, the Pacific Islands, and their descendants, as well as the social and cultural issues faced by Asian American communities, families, and individuals in contemporary society. In addition to entries on various groups and cultures, the encyclopedia also includes articles on general topics such as parenting and child rearing, assimilation and acculturation, business, education, and literature. (from publisher) 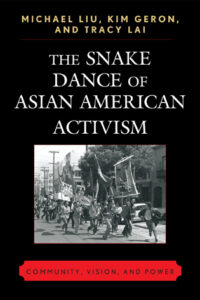 The Snake Dance of Asian American Activism: Community, Vision, and Power (2008) by Michael Liu, Kim Geron, and Tracy Lai — This text reinterprets a misunderstood and overlooked epoch of the Asian American experience, the Asian American movement (AAM). The authors argue that, contrary to the common view of the movement as a passing phase limited to college youth, the Asian American movement spanned diverse political viewpoints and became increasingly sophisticated and effective. Asian Americans were active participants and played unique roles in the social movements that convulsed the 1960s and 1970s, particularly in protests against the Vietnam War. The book traces the history of the AAM from its roots in the 1930s to the present day and its impact on diverse areas of the Asian American community. Most importantly, it looks at the societal and community dynamics that led to the movement’s trajectory. Using the lens of social movement theory, it analyzes the AAM’s rise and ebb and possible resurgence. The authors argue that the AAM constituted a distinct, identifiable, and relatively stable social movement that dramatically impacted the direction of Asian American political and social activity. (from publisher) 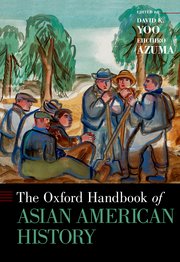 The Oxford Handbook of Asian American History (2016), edited by David K. Yoo and Eiichiro Azuma — In this volume, 30 leading scholars offer original essays on a wide range of topics. The chapters trace Asian American history from the beginning of the migration flows toward the Pacific Islands and the American continent to Japanese American incarceration and Asian American participation in World War II, from the experience of exclusion, violence, and racism to the social and political activism of the late twentieth century. The authors explore many of the key aspects of the Asian American experience, including politics, economy, intellectual life, the arts, education, religion, labor, gender, family, urban development, and legal history. (from publisher)