The records of VEP are arranged into seven series,

2.      Project files (1963-1989): Includes financial records, original project proposals, reports, correspondence, newspaper clippings and other printed materials such as flyers, posters and programs. Although VEP primarily funded projects in the American South, there are some records for activities in other states, including California, New York and Washington DC. The records for 1976 include VEP’s largest in-house funded project, Project 23.

3.      Financial records (1962-1992): Disbursements and personnel salary records make up the majority of this series. This series also includes files on travel by VEP employees as well as information on vendors.

4.      Election records (1962-1990): Research files compiled by VEP. Examples of files from this series are election returns, lists of voter registration, voter turnout and voting age population. This series also contains files on several campaigns; the bulk is related to the Maynard Jackson mayoral campaign in the early 1980s.

6.      Printed and published materials (1961-1990): This series includes any publications by the VEP or other related organizations. These include press releases, newspaper clippings collected by the research department, annual reports and publications on the history of the VEP. 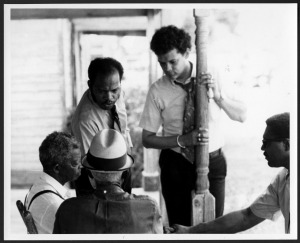 Above: John Lewis and Julian Bond encourage citizens to register during a VEP voter registration campaign.  Click image to view a larger version.

The Voter Education Project Organizational Records are held by the Archives Research Center of the Atlanta University Center’s Robert W. Woodruff Library. The papers will be open for use by the public later this month.