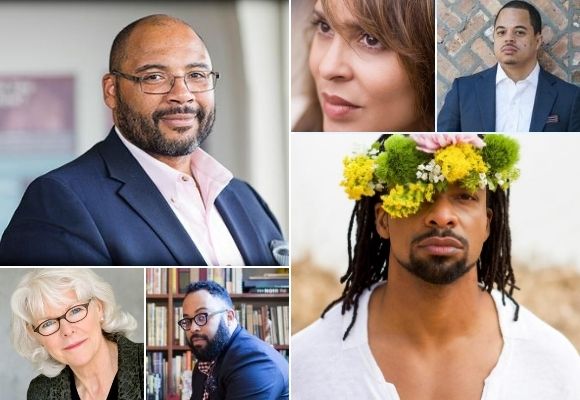 Keynote with Jericho Brown, in conversation with festival board president Mathwon Howard

Brown, the director of Emory’s Creative Writing Program, won the 2020 Pulitzer Prize for Poetry for “The Tradition,” a lyrical collection of poems that addresses the normalization of evil and celebrates those who have lived through it. Howard, who is now an associate vice president for development at Yale University, most recently served as Emory’s senior associate vice president for development programs. Register for this online event.

The Rose Library will host a virtual discussion about Pellom McDaniels III, who passed away suddenly earlier this year. The event will begin with the debut film screening of “Flash Here and There Like Falling Stars: The Life and Work of Dr. Pellom McDaniels III,” about his life, his contributions and his work as curator of the Rose Library’s African American collections. The film will be followed by a discussion of his legacy and impact on multiple communities with current and former members of the Emory community who worked closely with McDaniels and were deeply informed by his vision and generosity. Rose Library director Jennifer King will moderate the discussion with Dwight Andrews, associate professor of music theory and African American music at Emory University; Clint Fluker, assistant director of engagement and scholarship at the AUC Robert W. Woodruff Library; and Randall Burkett, retired curator of African American collections at the Rose Library. Register for the online event.

Pray with Your Whole Life: On Howard Thurman and Thomas Merton

Georgia theologian, author, and Emory alumna Barbara Brown Taylor will be in conversation with author Sophfronia Scott about their studies on Howard Thurman and Thomas Merton and prayer-centered life with Pastor Beth Waltemath of North Decatur Presbyterian Church. A former Candler School of Theology distinguished visiting professor, Taylor received a bachelor of arts degree in religion from Emory in 1973 before earning her master of divinity from Yale in 1976. She was named one of Emory’s 175 Makers of History and won the prestigious Emory Medal in 1998. Register for this online event.

Carl Suddler, Emory history professor and author of the nonfiction book ​“Presumed Criminal: Black Youth and the Justice System in Postwar New York,”​ will moderate as award-winning novelists Tom Mullen, Attica Locke, and S. A. Cosby discuss their hard-hitting crime novels set in Georgia, Texas, and Virginia. Mullen’s novel “Lightning Men”​ explores race, law enforcement, and justice in mid-century Atlanta. Locke’s “​Heaven, My Home”​ chronicles a Texas Ranger’s search for a missing child and grapples with American nostalgia and white supremacy. Cosby’s ​“My Darkest Prayer”​ follows an unconventional investigator tracing the cause of a small-town minister’s death. These authors will discuss what they love about crime fiction with Suddler and Emory graduate student Kareem Joseph. Register for this event.

Poet Kevin Young, who recently compiled and edited the anthology “African American Poetry: 250 Years of Struggle and Song,” will take part in a fascinating conversation about the range of voices in African American poetry, both in his own writings and as a scholar working on this anthology. Young, a former creative writing professor at Emory and former curator at the Rose Library who is now director of the Schomburg Center for Research in Black Culture, recently placed his papers with the Rose Library. Register for this event.

The endnote will feature poet and author Natasha Trethewey and interviewer Rosemary Magee for a discussion of Trethewey’s recent release, “​Memorial Drive​: A Daughter’s Memoir.” Dean and University Librarian Yolanda Cooper will give the introduction. The book wrestles with the South’s history through the lens of her life and the life of her mother, who was murdered by Trethewey’s former stepfather. ​“Memorial Drive” dives deep into a shared human experience of sudden loss and absence, but also into the enduring ripple effects of white racism and domestic abuse in the American South. Trethewey is a former creative writing professor at Emory whose papers are in the Rose Library archives, where Magee was previously director. Register for this event.