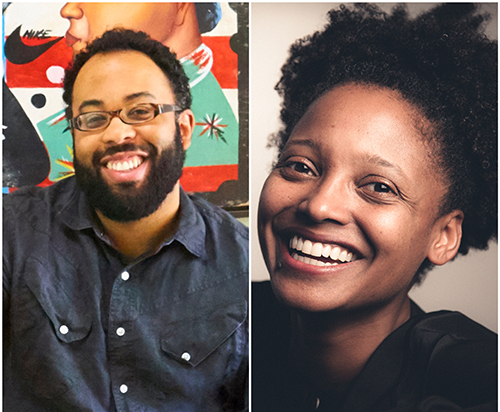 Tracy K. Smith and Kevin Young were budding poets and Harvard undergraduates in the early 1990s when they joined the Dark Room Collective, a community of African American writers founded in 1988 in Boston.

Poets and writers, both emerging and established, would crowd into a big house off the Harvard campus once a month on Sundays for readings and discussions that grew into a salon experience. Visiting writers and early readers included Elizabeth Alexander, Derek Walcott, Yusef Komunyakaa, Sonia Sanchez, and Alice Walker.

Young started attending the readings so he could sell the black student journal that he edited. Smith became involved in the Collective a year or two later, setting up the lighting for the events. Both met poets and enjoyed immersive poetry experiences that would change their lives.

From a friendship that started in college, their lives have continued to intersect, and now their papers have landed at the same institution. Smith and Young have placed their papers with the Stuart A. Rose Manuscript, Archives, and Rare Book Library at Emory University. The new acquisitions are important because they significantly expand the Rose poetry collections, and they contribute to the Rose’s commitment to document African American arts and cultural expression.

With materials from Smith and Young among its poetry collections, the Rose Library offers researchers “the papers of contemporary and influential writers who are connected to the Rose Library in intimate and important ways,” said Rose Library director Jennifer Gunter King.

“At the center of the Rose Library’s extraordinary poetry archive are the papers of Seamus Heaney, a teacher and mentor to both Kevin Young and Tracy Smith in their days as students at Harvard,” King said. “These three are exceedingly influential poets with extensive reach across generations of poetry readers, and we’re thrilled to have the papers of Kevin and Tracy in conversation with those of Heaney and the other poets in our archive.”

The road to success

They have both come a long way since their early days. 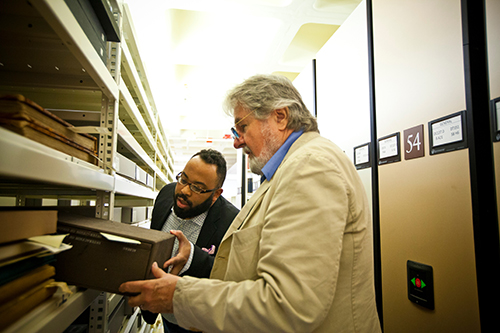 Kevin Young searches the Raymond Danowski literary collection with Danowski during the donor’s visit in 2014.

Young, director of the Schomburg Center for Research in Black Culture in Harlem and poetry editor of the New Yorker, served as the Rose Library curator of literary collections and the Raymond Danowski Poetry Library at Emory University for 11 years (2005-2016). He was also the Charles Howard Candler Professor of English and Creative Writing at Emory. He is the author of nine books of poetry and two nonfiction books and the editor of 11 anthologies. Young’s most recent book of poetry, “Brown” (2018), and his nonfiction book, “Bunk: The Rise of Hoaxes, Humbug, Plagiarists, Phonies, Post-Facts, and Fake News” (2019), were both named New York Times Notable Books and longlisted for the National Book Award.

Smith, the Rose Library’s 12th Night guest poet in 2018, served as the 22nd U.S. poet laureate for two years (2017-2019) and won the Pulitzer Prize for Poetry in 2012 for her collection “Life on Mars.” She is the author of six books of poetry and has contributed to multiple anthologies; her memoir, “Ordinary Light,” was a finalist for the National Book Award for nonfiction in 2015. She is the chair of Princeton University’s Lewis Center for the Arts, where she is the Roger S. Berlind ’52 Professor of the Humanities and professor of creative writing. Smith is also the host of the podcast and radio program “The Slowdown,” which provides listeners with five minutes of poetry a day. (Young chose Smith’s first book, “The Body’s Question,” for the 2002 Cave Canem Prize, which honors the best first book by an African American poet.) 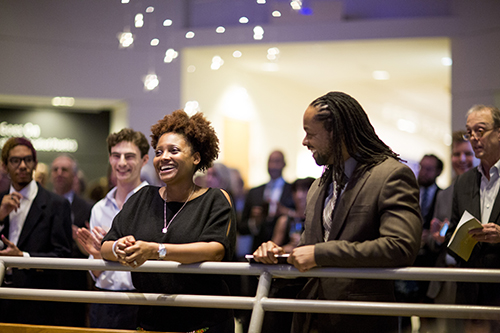 Young and Smith met as students at Harvard. Young, who graduated in 1992, started attending the Dark Room Collective poetry readings when he was a senior, and Tracy, a 1994 graduate, when she was a sophomore. Young was selling that publication he worked for, Diaspora: The Journal of Black Thought & Culture, a college magazine about black writers that included fellow students Colson Whitehead (author of “The Underground Railroad”) and Eisa Davis (playwright and 2007 Pulitzer Prize finalist for “Bulrusher”).

“I just started hanging out with them and getting to know them,” Young said. It wasn’t until he published some of his poems for the first time in the journal Callaloo that he realized he was a member. “One of the Dark Room founders said to me, ‘Why didn’t you say you were in the Dark Room?’ And I said, ‘I didn’t know I was in the Dark Room.’ So that’s how I became a member.”

Being part of this group that welcomed black poets at all stages of their careers allowed the aspiring poets to visualize themselves as full-time, successful poets. Smith recalls setting the lighting for a reading by Natasha Trethewey, who also joined the Dark Room Collective.

“I remember thinking, gosh, she has a book. One day I’ll have a book, if I’m lucky,” Smith recalled. “I remember these crucial voices and getting to go out to dinner with these poets sitting at the same table, and maybe just shyly eating a meal and listening to all the banter and feeling like, this is exciting. These are real people.”

The value of archives

It wasn’t until their experiences with more seasoned poets, and archives, that they became more serious about saving their own work for some possible future use by others.

“I always was a keeper of things,” Young said. “I usually say that I come from a long line of pack rats.” He had saved notes, draft, programs, and other items over the years but hadn’t really thought about what he might do with them.

Smith wasn’t consciously saving her papers for archival use, either. “I think I was just saving the bits and pieces of my life that seemed meaningful to me, and poems I’ve written and different texts that have come my way that have been important to me as a writer,” she said.

She started paying more attention to archives when she visited Emory a few years ago. Young took her into the Rose library and pulled out several different files from the papers of Seamus Heaney, Lucille Clifton, and a few other poets Smith admired.

“Just seeing some of those minor changes that occurred from one draft of a poem to the next, I felt like I learned so much about poetry and about the particular perspectives of those poets,” Smith recalled. “I’ve seen facsimiles most of my reading life, but to hold the living document, that meant so much more.

“I was also really moved to see how much life Rose Library has in it,” Smith added. “Students and their classes are held in those rooms, and people are moving through and handling the archive in a way that I haven’t really seen at other institutions.”

It’s not surprising that Young is a champion of archives. Even before he began his work as curator at the Rose Library, he enjoyed sifting through the papers of other African Americans, searching out their stories and their life’s work, which in turn inspired his own writings.

Around 2000, he started spending a lot of time in archives, hunting for rare books and poems. He was working on his own books and the anthology, “Blues Poems” (2004).

“I spent a lot of time digging around in the archives at that time,” Young said. “I learned a lot and unearthed a lot of things.”

He’s currently finishing an anthology titled “African American Poetry: 250 Years of Struggle and Song” for the Library of America. “I’m still working in archives because there are things you can’t find otherwise,” not even online, he said.

Connections among the Rose collections 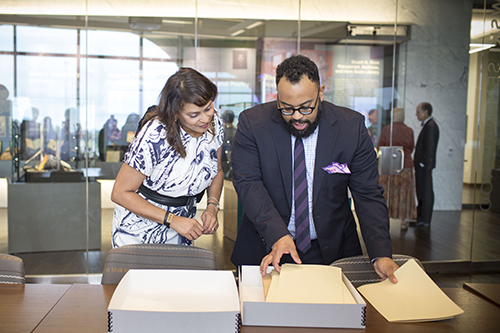 “I’m really excited and honored to be there with Tracy and Natasha, who are these important members of the Dark Room Collective, and to be there with Seamus Heaney, who was my teacher and Tracy’s teacher, too,” Young said. His papers will also be alongside those of Lucille Clifton, someone he considers a mentor and an important influence in his life.

“It’s always felt like with both Seamus’ papers and Lucille’s there that it was coming full circle, being a curator there and now to have my papers there,” Young said. “It’s really an honor.” (Young’s first book of poetry, 1995’s “Most Way Home,” was selected by Clifton for the National Poetry Series, and he helped bring her papers to Emory when he was a Rose Library curator.)

Smith, who fell in love with the Rose Library’s archives after that visit a few years ago, is also happy to have her papers among those of poets she calls friends and inspirations.

“It feels really exciting to know that even the private conversation that was happening only in my head  between my work and some of the writers that I revere is now a little bit more public because the archives are living in the same space,” she said. “It feels exciting to be a part of the history of the art form.

“I also feel incredibly safe knowing that no matter what I do, those things have a home, and they’re going to be tended to properly. Any oversight, error or catastrophe that might befall me and my home, those manuscripts and letters and documents are safe, and that feels really good.” 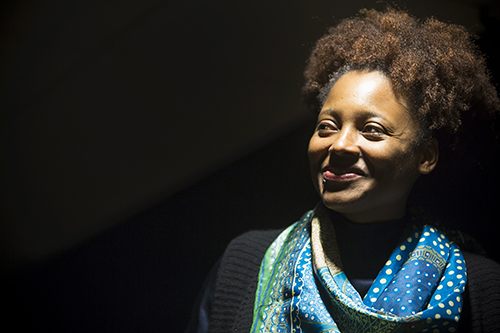 Tracy K. Smith at her public reading at Emory University in 2018.

The two poets hope their collections will benefit future scholars, whether that be instructional or inspirational.

“I hope they’ll see the ways that my ideas begin. I kind of enjoyed looking through my notebooks and finding little journal entries,” Smith said.

“It’s exciting for me to think that a student could see some things scribbled in a notebook, taking shape slowly, patiently over time, and becoming a book,” she continued. “I hope that could be inspiring. I know I used to think books just came because people had the wherewithal to sit down and write them. Now I know it’s a meandering path; it’s full of things that might not seem hugely important at the time but then they proved to be.”

Young said he was curious to see what students and other researchers would come up with after working with his papers.

“I think one of the interesting things is waiting and seeing how people interact with the papers,” he said. “I know from having seen Tracy’s papers, I was struck by her early work and seeing how she got to be the poet she is. Seeing that kind of development is really inspiring. I hope people find value in that and learn from that.”