Dramatic readings of lectures originally given by abolitionist and orator Frederick Douglass, presented at an event Nov. 27 at Emory’s Cannon 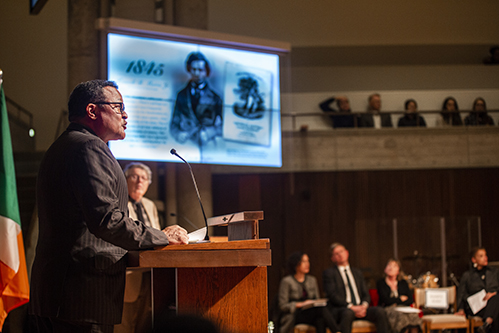 Chapel, struck a chord with contemporary listeners just as they did more than 130 years ago.

Emory Libraries and the Stuart A. Rose Manuscript, Archives and Rare Book Library partnered with the Consulate General of Ireland in Atlanta for “Frederick Douglass: A Bicentennial Tribute,” an event celebrating the 200th birthday of the abolitionist, author, statesman and orator. The event drew about 175 people from the Atlanta and Emory communities.

Presenters read narratives and excerpts from a selection of Douglass’s lectures, which included “American Prejudice Against Color” given in Cork, Ireland (1845), “4th of July Speech” in Philadelphia (1852), “Address for the Promotion of Colored Enlistments” in Philadelphia (1863), and the address delivered before the National Convention of Colored Men in Louisville, Kentucky (1883).

“These are powerful, hard hitting, so often tough speeches, and they were delivered in just the right way,” said Consul General Shane Stephens. “Humor was brought in when appropriate, and that really lifted it.”

“Listening to the words of Frederick Douglass read by his direct descendant, Kenneth Morris, and by Emory faculty was an extraordinary, electric experience,” said Geraldine Higgins, director of Irish Studies at Emory. “This event was so moving and informative, and it was one of the highlights of the semester.”

Parts of the lectures resonated with the audience as the speakers gave passionate readings, even drawing laughter several times as parallels to recent political events became pointedly obvious. In the 1845 speech read by Morris, Douglass recalled he was accused of lying as he spoke out against slavery to a crowd containing several slave owners.

He offered instead to read a law passed by southern legislators: “This raised a general clamour, for they did not wish the laws exposed. They hated facts…,” sparking laughter from the Cannon Chapel audience.

“What really struck me was how the words of Frederick Douglass 150 or 130 years ago still resonate today,” said Andra Gillespie, associate professor of political science, after the event. “He could have said the exact same thing if he were living and breathing and walking among us today. I think that shows how timeless and relevant his words are. It also tells us how far we have to go as a community, as a society.”

The event was part of a wave of celebrations by Irish consulates across the U.S. this year, commemorating Douglass’s 200th birthday and his relationship to Ireland. Born as a slave, Douglass, who died in 1895, did not know what year he was born, but historians have estimated the year as 1818.

He escaped as a young man in Maryland, writing and speaking out against slavery and becoming well known as an orator and abolitionist. During his lifetime, he published three autobiographies, held public office and published an abolitionist newspaper called the North Star.

Douglass traveled to Ireland in 1845 and 1846 for a lecture tour, shortly after the publication of his book “Narrative of the Life of Frederick Douglass, an American slave.” He was warmly received and developed an affinity for the country.

During his stay, he met people who made an impact on him, particularly the “Liberator,” Daniel O’Connell, who led a nonviolent political campaign for Catholic emancipation. Douglass’s experiences in Ireland had a significant effect on his personal development as an international human rights activist, and he took to calling himself “the black Daniel O’Connell.”

The readings closed with a video of Oscar-winning actor Louis Gossett Jr. reading “The Passing of Douglass,” a poem by W.E.B. Du Bois on the occasion of Douglass’s death on Feb. 20, 1895, recorded especially for the tribute event at Emory. Gossett was slated to read the poem in person at the event but was unable to attend due to a scheduling conflict.

“This tribute to Frederick Douglass was a great example of collaboration and community engagement,” said Pellom McDaniels, Rose Library curator of African American collections and emcee for the event. “The fact that the Irish consulate reached out to us to imagine how we might jointly present a memorable event with Douglass at the center became a wonderful opportunity for Emory to serve as host to the larger Atlanta community. I am so appreciative of our presenters, who made the event a tremendous success.”