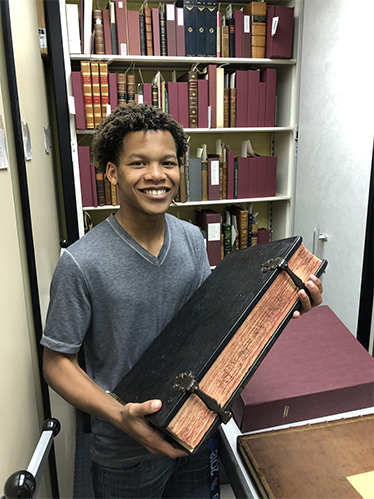 Kevin Jennings, a sophomore at Cristo Rey Atlanta Jesuit High School, holds a rare book during a tour of the Rose Library. Jennings is a LITS intern during the 2018-2019 academic year, through his school’s Corporate Work Study Program. Emory is a partner in the program.

for wanting to apply to Emory when he’s a senior. Jennings, a sophomore at Cristo Rey Atlanta Jesuit High School, came to Emory in August 2018 through his school’s work study program to begin an internship with Libraries and Information Technology Services (LITS).

His fall semester supervisor, Anne Marie McLean, says that while she wasn’t sure what to expect at first, Jennings impressed her from his first day. “His maturity level, ability to adapt to a new work environment, and initiative to learn and take on new projects and processes were equal to if not greater than that of undergraduate students four or five years his senior,” she says. Jennings himself appreciates the chance to work for Emory. “I’m learning to manage time to reach my deadlines here while also going to school and completing those deadlines,” says Jennings.

Emory University is a partner in Cristo Rey’s Corporate Work Study Program, which gives high school students early exposure to the working world. Students in the program gain job skills, contacts, and experience, and they go on to college in high numbers. Jennings works five days a month (one day a week, and two days on one of those weeks), and his school transports him to and from Emory.

In his seven months interning for Emory LITS, Jennings has worked in different areas of the Woodruff Library, including the Music & Media Library checkout area, the front entrance desk, and the main service desk on Level 2. His supervisors at Emory attest to his warmth and approachability. “He has a fantastic sense of humor and easygoing personality,” McLean says. “Kevin is extremely creative and has a unique ability to tell a story through technology and art,” adds Lyndon Batiste, the library service desk manager and Jennings’ current supervisor. 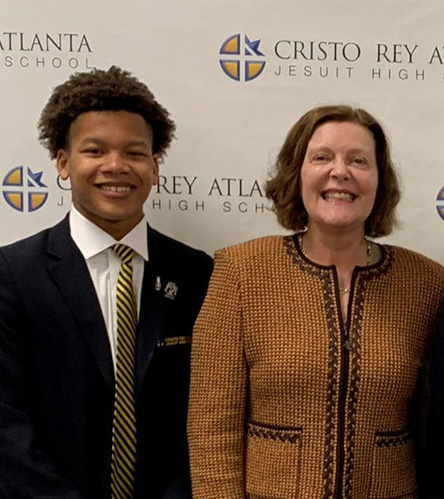 Emory University President Claire Sterk, pictured with Kevin Jennings in January when she spoke at the school during the Coffee with Cristo Rey event.

At Cristo Rey, Jennings’ schedule already resembles that of a college student. He takes geometry, AP world history, Latin I, and honors English on a rotating schedule. Outside of school, he likes to keep himself busy. He owns a non-profit company called Blankidz, Inc., which distributes blankets to the homeless and foster kids in Atlanta. He also owns a company called Kevin J Productions, through which he produces artistic projects such as photography, paintings, and sculptures.

Jennings’s work at Emory is very compatible with his vision for the future. His father, a real estate broker, has inspired him to be a business owner at the age of 15. “Mainly, I want to keep out the middle man so that everything I own is my own,” says Jennings. At his Emory internship, he has focused on film production, creating instructional videos to train new service desk staff at the Woodruff Library. Jennings has high ambitions for life after high school. Emory, Stanford, and Georgia Tech are his top three choices for college applications, and he plans to major in architecture, engineering, or economics. “I find it fun rolling with the big dogs,” he laughs.